Honour and understatement: a portrait of Leslie Boosey

Leslie Boosey (1887-1979) was fortunate in possessing those great gifts of a businessman, the powers of persuasion and placation.  Letters in the Boosey & Hawkes archive (MS Mus. 1813) record the understatement and wry humour with which he answered the frequent broadsides sent zinging into 295 Regent Street by composers, conductors and the general public.  His eye is always atwinkle, even in print: 'I feel the only course to pursue for the present… is one of masterly inactivity'.  Or 'I should think we should very soon find ourselves in the land of copyright infringement if we had anything to do with it'.  Or (to Victor Bator, executor of Béla Bartók’s estate): 'I always open a letter from you rather gingerly as I am afraid that when I read it there may be some kind of an explosion, and your letter of November 7th was no exception'. 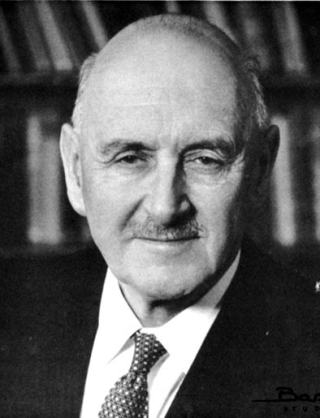 It is true that, in learning his trade, Boosey had been able to draw on a long tradition and deep reserves of wisdom and experience.  Boosey & Co. had passed into the hands of the fifth generation when, as ‘the heir to a rich and venerable music business that owned half of upper Regent Street’, he had inherited the chairmanship of the family firm in 1920. [1]  Ten years later he was to steer the firm into the merger with Hawkes & Son and beyond, exerting a calming and steadying influence on the new enterprise.  ‘He was the engine; I was the brakes’ was his own verdict of his partnership with Ralph Hawkes. [2]  He served as Chairman of Boosey & Hawkes almost continuously until 1964.  Helen Wallace, in her history of Boosey & Hawkes, describes him as ‘the very model of a Victorian gentleman, dignified, inscrutable, with a strong sense of family duty’. [3] In his letters, the bread and butter of everyday business dealings are enlivened by memorable chattiness: witty asides, commentary on current affairs or down-to-earth anecdotes.  Leaving Southampton for New York on business in April 1936, he saw the brand-new Cunard liner Queen Mary, then still being fitted out: ‘She didn’t look so big as I expected’, he told his assistant W. Paston. One letter of the mid-1950s preserves a vignette of his life at home in Brickendon (Hertfordshire) in a fond description of his grandson ‘who is very devoted to his little Kangaroo which goes to bed with him and also which is strapped on to his bicycle when he rides around the garden'. 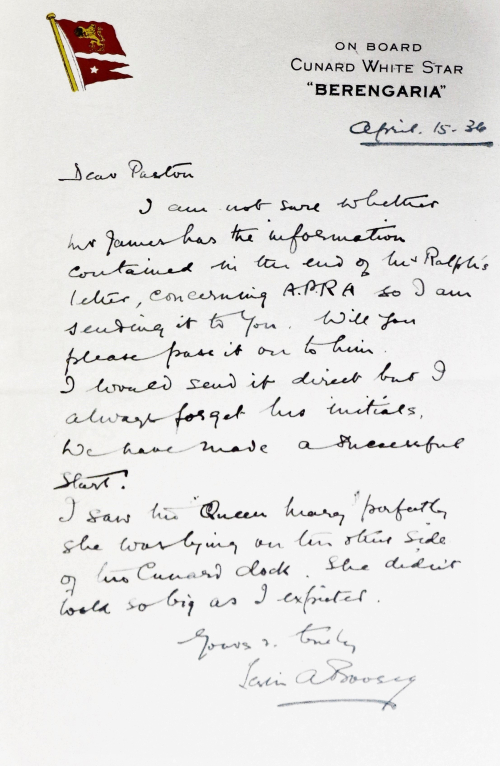 He was profoundly dismayed by the outbreak of the Second World War.  'The picture of two civilized nations (!) engaged in a process of mutual destruction seems the most incredible madness one has ever imagined', he wrote to the conductor Adrian Boult.  His despair was surely sharpened by his experiences in the Great War: as he wrote elsewhere, ‘I lost a very large portion of my own relations in the last war and finished up as a prisoner myself’.  That last remark is another understatement.  It gives cause for reflection that, in all these letters, such a conversational man should make not a single reference to an incident during the First World War when, captured by the enemy, he refused to give away his information, and found himself up before an enemy firing-squad, looking death in the eye.  Only at the last minute had the German officer told him, ‘All right, you can go back – you’re a gentleman’. [4] 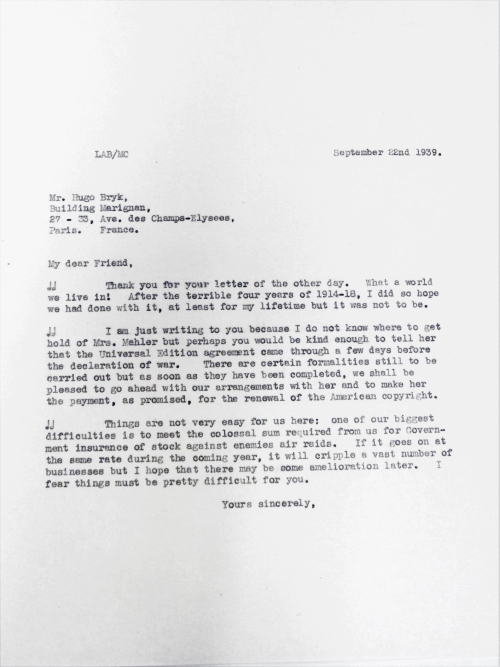 In peacetime this inner steel was seldom bared, but it was not altogether dormant: this was a man who would stand up for his family and company when necessary.  Once, during a round of golf with Ralph Hawkes, Robert Graves’ brother Charles asserted that his father had effectively been swindled by Boosey & Co. many years before.  When Leslie Boosey heard about this, his response was to write a letter informing Graves calmly but plainly that the allegation was slander, and that legal action would be taken if it was ever repeated.

Boosey’s thoughts about music make interesting reading.  E. J. Moeran, he thought, 'might be worth watching', and among British composers he seems to have thought highest of Ralph Vaughan Williams, William Walton and Benjamin Britten.  He considered Vaughan Williams ‘our greatest Composer, probably the greatest purely English Composer we have ever produced’, though Britten ‘can rank alongside V. W. and Willy at any time’.  He knew what he disliked, too: one piece that he 'found rather difficult to take’ was Aaron Copland's ‘very extreme’ Symphonic Ode, about which he made known his feelings on at least two occasions.  ‘I cannot believe it adds very much to musical composition and it certainly makes a terrible noise’, he declared. 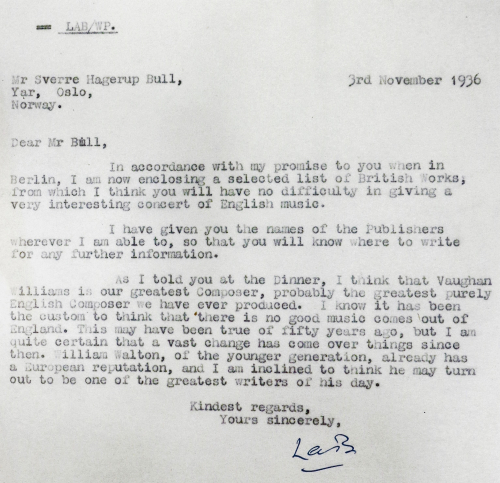 The tone of the entry for Leslie Boosey in the Oxford Dictionary of National Biography chimes entirely with the character discernible in his papers: that of a public-spirited man and music-lover dedicated to the flourishing of music and composers in their own right, and not for commercial gain alone.  Boosey served as Chairman of the Performing Right Society from 1929 to 1954, and it was also he who, in 1944, secured the lease of the Royal Opera House just in time to prevent its transformation into a dance-hall. [5] The Royal Philharmonic Society’s prize for work done ‘behind the scenes’ of the musical world, which has been awarded biennially since 1980, is named after him. [6] Yet, having chronicled this distinguished career and long life of 92 years, the author of the Oxford Dictionary biography chose to devote the final paragraph to a remarkable assessment of Leslie Boosey’s character, a eulogy which is all the more powerful for the fitting understatement that pervades it.  There is no evidence in the archive to contradict its verdict.