From the last decade of the 19th century until the 1980s, the British Library steadily acquired, through a mixture of purchase, donation and legal deposit, a collection of about a hundred programmes relating to the cymanfa ganu (plural cymanfaoedd canu) or Welsh hymn singing festival. Due to lack of cataloguing resources through the years, information about these has never been publicly available. However, they have now been catalogued and will be made available for consultation.

The programmes are essentially collections of hymns, psalms and anthems, to be sung at annual festivals. They are ephemeral publications, designed to be used on a particular occasion; the next yearâs gathering would have a new booklet with a new selection of hymns. They are chiefly in tonic sol-fa notation, or in a mixture of sol-fa and staff notation. On the front is printed the date, time and place of the gathering, its sponsoring body (generally a choral union of the religious denomination concerned), and details of the musical director, organist, adjudicators and secretary. There may also be instructions regarding times of rehearsals, attendance requirements and behaviour at rehearsals, a syllabus of topics on which children are to be examined, and statements of accounts relating to the previous yearâs event.

So what was, or is, a cymanfa ganu? It is a gathering for the singing of hymns, traditional in Welsh Nonconformist churches, in which the whole congregation participates, singing in four-part harmony. Beginning in the mid-19th century with a desire to improve standards in congregational singing, the tradition continues to the present day in Wales and as a marker of Welsh identity in other countries where Welsh people have settled, notably the U.S.A., Canada, Australia, New Zealand, and Argentina. The singing is directed by a conductor and is whole-hearted; the style is described variously by hearers as âdevotionalâ, âmajesticâ, âgrandâ. Participants describe the gathering as being characterised by hwyl (emotional or religious fervour within the singing). If the communal mood demands, the end of a hymn will be repeated several times, heightening the emotional and spiritual intensity of the experience. 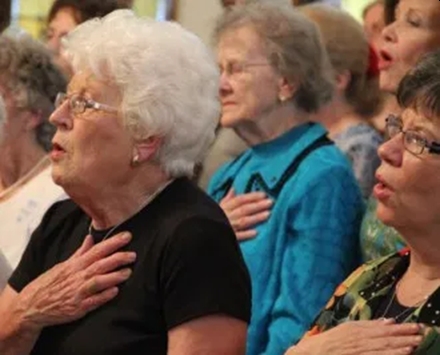 Singers at a cymanfa ganu. Photo reproduced with permission by The Van Wert Independent.

Essentially the assembly is an act of worship. However, it has also always had a social aspect. In an oral history account, described by Helen Barlow[1], Gwen Davies (born 1896) remembers the cymanfa ganu of her childhood as a significant and exciting religious and social event, for which everyone made sure they had new clothes! Pre-First World War newspapers carry detailed reports on cymanfaoedd canu as social occurrences: for example, The Welshman reports on the 28th October 1910 that at the annual cymanfa ganu of Welsh Congregationalists of Carmarthen and district, the childrenâs and adult choirs numbered jointly 1000 voices; there was a string band, including trumpeters, and the children, after being catechised, âsat down to a sumptuous tea!â[2]

Images of a cymanfa ganu associated with the National Eisteddfod of 1963. The National Library of Wales.

The cymanfa ganu also in earlier times often included lectures on musical topics and examinations in music for children and adults.  It was therefore a gathering which combined social, educational and religious purposes.

Its origin can be traced in the work of itinerant singing teachers in the 18th century, who laid the foundations for Yr Ysgol GĂąn (the weekly singing school). In the early 19th century, precentors were appointed by churches keen to improve the quality of congregational singing. Godfrey Wyn Williams[1] gives the example of the Baptist chapel at Penycae, which appointed Owen y Cantwr its codwr canu or precentor in 1826. He introduced week-night practices so that the congregation which had previously sung in unison could learn to sing in parts. This involved the precentor in hours of note-copying (pricio), due to the prohibitive cost of printed music at that time. Not everyone was enthusiastic, however, about such advances. Some older Calvinistic Methodist chapel members were apparently annoyed by three- and four-part singing, believing that âsuch activity encouraged the young to become too frivolous and materialisticâ (Williams, p. 59).

An important figure in the development of church music was Ieuan Gwyllt (1822-1877), who published a collection of hymn tunes strongly influenced by German chorales, Llyfr Tonau Cynulleidfaol, in 1859. Gwyllt believed that everyone should sing, and everyone should sing in harmony. This hymnal, and the assembly which he organised to mark its publication, aided the development of the four-part congregational singing which became a feature of the Welsh musical tradition.

Another vital contribution was the success of the Tonic Sol-fa system of music notation (created by John Curwen in about 1842). Liverpool-based musician Eleazar Roberts promoted the system in Wales in the 1860s and it quickly became an accepted teaching method in schools and chapels. The text-based notation was cheap to print, and its availability fostered widespread sight-singing ability and enthusiasm. Cymanfaoedd canu then became occasions for the examination of candidates for the certificate of the Tonic Sol-fa College.

Not all of this musical activity was so inclusive, and the noble aim of focus on worship was often not present. Inter-denominational choral competitions were fiercely contested, and deplored by some writers. From the 1870s, however, congregational singing, âsinging from the heartâ, grew in popularity under the influence of the religious revival campaign of American evangelists Moody and Sankey and the approachable melodies they introduced.

The cymanfa ganu remained popular up until the First World War, but its story after that is not so easy to trace. These British Library holdings are evidence of the continuation of the hymn festival phenomenon, its development, context and repertoire, throughout the 20th century.

[1] Barlow, Helen (2019). âPraise the Lord! We are a musical nationâ: the Welsh working classes and religious singing. Nineteenth-Century Music Review (In Press).

Following our blog post on accessing our online printed and manuscript music collections, we have put together some further links to digitised music content that can be freely accessed online, both from other collection areas in the British Library as well as external sources.

These links are not exhaustive but we hope they can provide a useful start to users who are looking to access digitised music collections online, especially during this time.