A piano-playing theme is emerging from the Coronavirus lockdown, with several famous names playing online, or mentioning that they are learning to play, including actor Anthony Hopkins, footballer Nathan AkÃ©, and rugby union player Tom Curry. For anyone with time for a little extra practice, this seems a good time to visit the pedagogical works of the pianist and composer Muzio Clementi.

Clementi was born in Rome in 1752. Moving to England at the age of 14, he spent the rest of his life either in London or travelling extensively in France, Germany and Russia. A simple list of his professional activities does not convey the significance of his achievement in each area. As a publisher, he was the first to publish the works of Beethoven in England, including some first editions; as a teacher, he influenced many important pianists of the next generation; his piano manufacturing firm introduced technical innovations, and his compositions, although overshadowed by those of more famous composers, are still played and admired 200 years on. 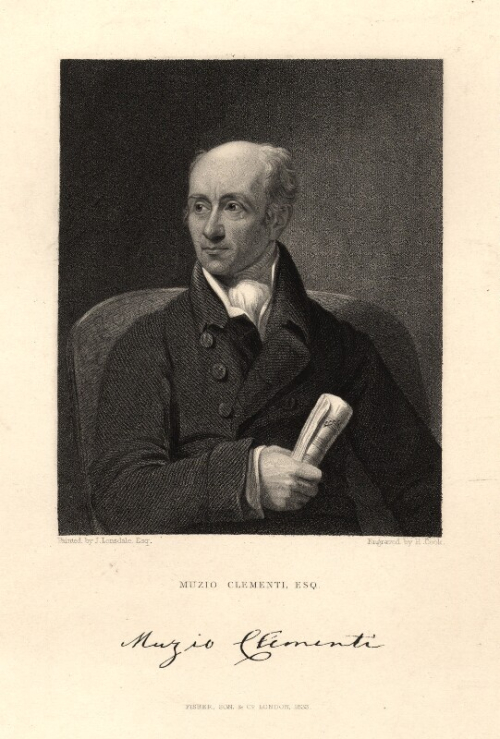 As a composer, Clementi had most success with his keyboard music, writing sonatas, variations, suites, preludes and fugues and technical piano studies, and his best known publication Gradus ad Parnassum (1817, 1819, 1826) is a large compilation of these works.

His periods of travel were spent in promoting the Clementi firmâ€™s pianos, making contacts with composers for his publishing business, and teaching. Both in England and abroad, he had professional pupils like J.B. Cramer, John Field, Ludwig Berger (later Mendelssohnâ€™s teacher), Carl Zeuner and FrÃ©dÃ©ric Kalkbrenner (later briefly a teacher of Chopin). He also taught amateur players, and it was for this market that his educational works were written. In London he was in great demand as a piano teacher in the early 1790s, despite the lapse in his performing career caused by the great popularity of the music of the new arrival, Haydn.

His 1801 piano method, Introduction to the art of playing on the piano forte (British Library g.303.(3.), is one of the first instruction books specifically for the piano, which, as a relatively new instrument, was just beginning to supersede the harpsichord. It contains extracts from the works of other composers such as Handel, Corelli, Mozart and Beethoven, graded in difficulty, as well as instructional text. It begins with the basics (with a hint to the note-learning beginner to ignore the â€˜short notesâ€™ of the keyboard except as guides to the eye) and moves on to detailed information about theory, technique, style and expression for the more difficult pieces. The instructions are addressed directly to the pupil, with a serious and uncompromising assumption of a high level of understanding and application. For example, at the foot of one fingering study is the comment â€˜Most of the passages fingered for the right hand, may, by the ingenuity and industry of the pupil, become models for the left.â€™ There is certainly no â€˜dumbing downâ€™ here!

Introduction to the art of playing on the piano forte quickly appeared in French and German translations. Publications aimed at intermediate and advanced students followed, and Clementiâ€™s educational music became well known.

Among these pedagogical works are the easy Six progressive sonatinas op. 36, first published in 1797, which are still in use as teaching pieces, with a new edition appearing as recently as 2017. 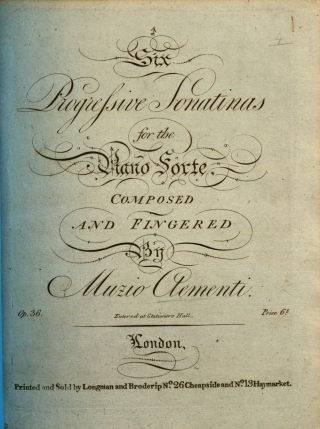 The respectful attitude to the learner observable in the Introduction to the art of playing on the piano forte is also in evidence in the quality of the musical construction of these mini-sonatas; they are pieces which are not just possible but also satisfying for elementary pianists to play. Recommended for lockdown pianists everywhere!

Ernst Roth and the â€˜Business of Musicâ€™

Ernst Roth (1896â€“1971) might never have worked for Boosey & Hawkes, nor even have lived in Britain at all, had it not been for the foresight of Leslie Boosey and Ralph Hawkes amid the falling darkness of the late 1930s.  Papers in the Boosey & Hawkes archive (MS Mus. 1813) record the tale.

Roth had studied law, philosophy and music in his home city of Prague, and after earning his doctorate he moved to Vienna in 1922, joining the publishers Universal Edition.  Here, having found his vocation as a music publisher, he might have expected to spend his whole career.  But then came the Nazi Anschluss of 1938.  On March 12th that year, Austria was annexed and subjugated by Hitlerâ€™s regime.  With breathtaking speed a â€˜commissarâ€™ was appointed to â€˜controlâ€™ Universal Edition: that is, to Nazify it. [1] Roth, along with his colleagues Alfred Kalmus and Erwin Stein, being Jewish, were immediate targets.  Not three weeks later, on March 31st, he was, in his own matter-of-fact words, â€˜discharged on account of my non-arian originâ€™. [2]

In London, Ralph Hawkes and Leslie Boosey were already swinging into action, planning a piece of shrewd businessmanship that also served as a bold rescue operation.  Boosey went to Vienna and, with the blessing of Jella Hertzka, the widow of the founder of Universal Edition, secured the services of Roth and Stein for Universal Edition's London branch (which Kalmus had already established in 1936).  Boosey also bought up all the shares in that subsidiary firm and obtained rights for most of Universal Editionâ€™s catalogue.  Roth, Stein and Kalmus were given permission to take up residence in Britain, and in September started work in their new positions: Nazi Viennaâ€™s loss was Londonâ€™s gain. 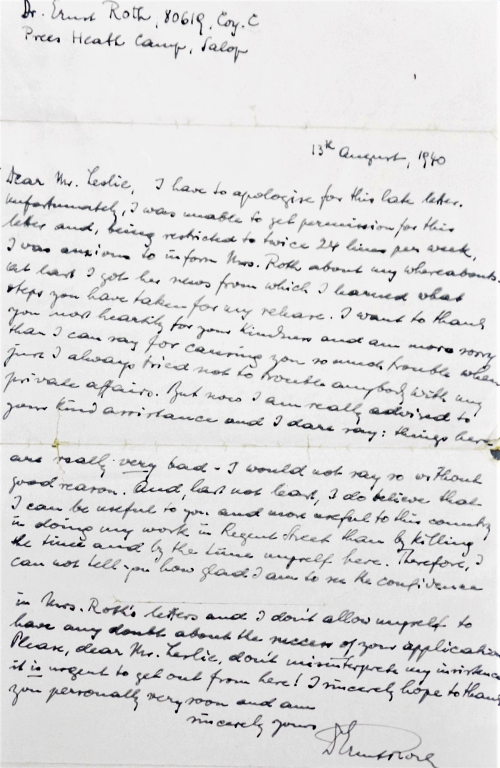 Even on British soil their troubles were not over, however.  In July 1941, in common with many other overseas nationals, the three men found themselves interned as â€˜Enemy Aliensâ€™, being separated from their families and sent to camps in Shropshire or on the Isle of Man.  Letters in the archive tell of the lengths to which the firm â€“ Leslie Boosey in particular â€“ had to go in order to have them released.  At one point Boosey even asked the composer Ralph Vaughan Williams for help in pleading Rothâ€™s case with the Home Office. [3]  All three were eventually released after nearly six monthsâ€™ internment. 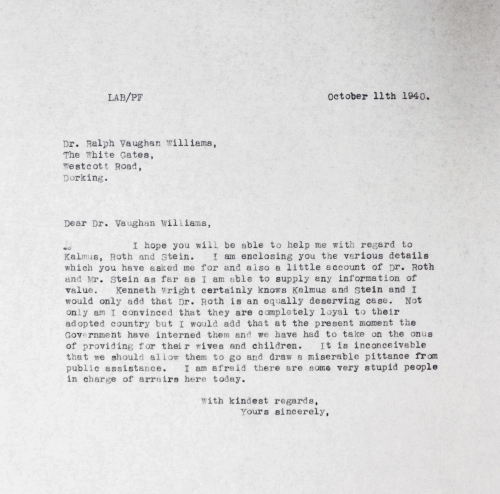 Once settled, though, Roth committed the rest of his career to Boosey & Hawkes, remaining in continuous service until his retirement in 1964.  Rising to the position of Managing Director, he took charge of correspondence with composers and members of the public, scanned the horizon for infringements of copyright, and superintended the Music Departmentâ€™s various divisions with a hawkâ€™s eye.  Helen Wallace, in her history of Boosey & Hawkes, describes a â€˜ruthlessly commercialâ€™ man with â€˜a razor sharp mind and the old-world charm to bring the grandest composers to heelâ€™. [4] With Rufina Ampenoff (originally his assistant and later head of the Symphonic and Operatic department) he formed a formidable double-act. 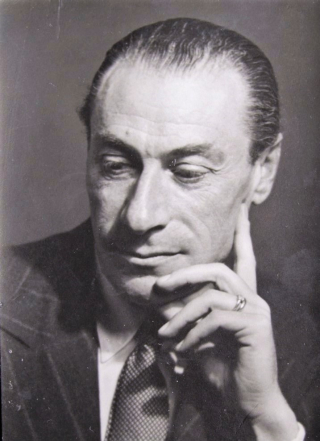 Without fear or favour he defended his companyâ€™s interests in the world of music. â€˜I am afraid copyright is a matter which does not admit sentimental considerationsâ€™, he wrote to the organisers of the Edinburgh Festival in May 1960, informing them that the Leningrad Symphony Orchestraâ€™s own instrumental parts, being unauthorised, could not be used during their forthcoming appearance in Britain: â€˜Even Russian visitors owe obedience to the law in this countryâ€™. [5] He was keenly aware of the commercial value of music and its fickle fluctuations: in the 1960s Benjamin Lees was told that there was â€˜very little that can be doneâ€™ with string quartets, regardless of their quality.  And within the company, too, Roth ran a tight ship: â€˜In the last few months the general discipline has markedly declinedâ€™, reads an internal memorandum from September 1961; â€˜[â€¦] I like to believe that discipline among adults is a matter of self-respect and need not be enforced. However, I would have no alternative but to enforce it if this request [â€¦] remains without the expected responseâ€™. [6] 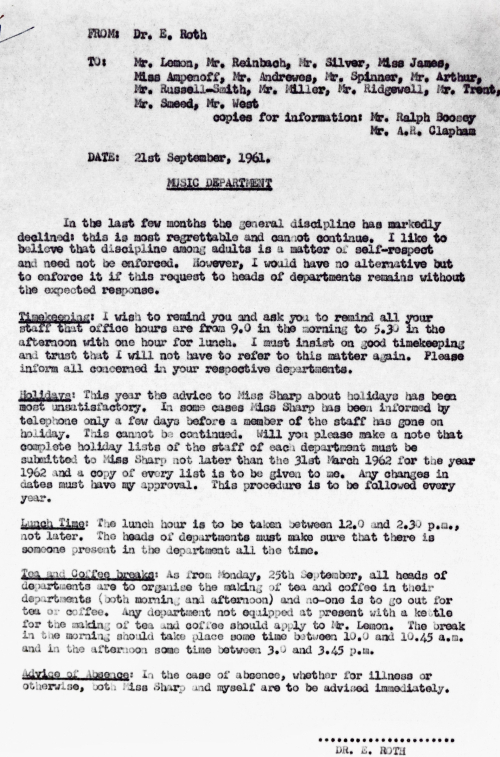 Outwardly, the man himself may have appeared no more inclined to â€˜admit sentimental considerationsâ€™ than the principles of copyright.  But he was no philistine, and he knew his own mind when it came to musical judgement.  He placed Brittenâ€™s War Requiem â€˜among the most outstanding works ever written at any timeâ€™, [7] and his memoirs, published after his retirement in 1964, reveal that his long years in â€˜The Business of Musicâ€™ had not extinguished his love of music for its own sake, nor his belief in its value to humanity:  â€˜Although I am at home in serious music I have a deep respect for music as a harbinger of joy. Let no one rob it of this precious gift!â€™ [8]