In these socially distanced times, a concerto for one person alone could be just the thing…

“I think that your idea of a concerto is wonderfully in tune with the times (and one should always move with them), and I entirely approve… In my non-authoritative opinion as publisher, I should think that a short preface might be expedient, in which it would be made clear that this concerto was conceived for piano alone, if this cannot be expressed on the title page in a few words. The object is new, and should be seen as new and pace-setting.”

Having mastered the pedagogical piano works of Muzio Clementi featured in our last blog post, you might now be looking for a new pianistic challenge. Among the latest batch of digitised manuscripts to be made available online is the autograph manuscript of Robert Schumann’s Piano Sonata in F minor, Op. 14 (Add MS 37056) – first published in 1836 as a Concert sans Orchestre (‘Concerto without orchestra’).

Actually, Schumann seems to have initially intended to give the piece the rather less novel title of ‘Sonata’. That word appears, crossed out, three times throughout the manuscript: once at the beginning (f. 3r), replaced by ‘Concert’, once in the middle of the last movement (f. 21r) and once (almost illegible) on the back of a frustratingly cropped slip of paper (f. 20r). 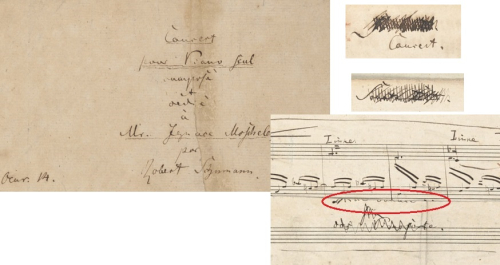 Bound at the beginning of the volume (f. 1r) is a title slip in Schumann’s hand that describes a ‘concerto for piano alone’ – a subtly different emphasis to the final published title (a concerto for piano alone, or a concerto without orchestra?). It is an interesting sub-genre, with other examples from J. S. Bach’s Italian Concerto and Charles Valentin Alkan’s 1857 Concerto for Solo Piano on one hand, through to 20th-century offerings by Kaikhosru Sorabji and Michael Finnissy on the other. Some of these attempt to evoke the effect of orchestra and soloist on a single instrument, while others give more a sense of a concerto through the grand, virtuosic rhetoric of the piano writing – which is perhaps the approach in this piece.

But Schumann’s title didn’t stick anyway. Ignaz Moscheles, dedicatee of the first edition, was dismissive of the concerto idea and when the piece was published again in 1853, in a heavily revised second edition, it reverted to being a ‘Grande Sonate’.  (Incidentally, an autograph book that belonged to Moscheles is also in the British Library’s collections – Zweig MS 215 – it includes entries from both Robert and Clara Schumann).

“The composer requests the safekeeping of the manuscript, which also contains other pieces” 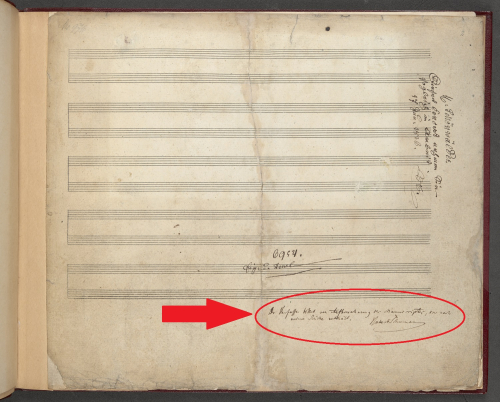 The title is just one of several puzzles encapsulated in the manuscript. The ‘other pieces’ referred to by Schumann in his note above are two extra movements that would have been included in the original idea of the piece as a five-movement sonata. Those two movements, along with two variations from the middle movement, and the first page of a different last movement are crossed through in this manuscript, all dropped for the first edition. One of those two completed movements was reinstated in the second edition; the other was not published until 1866, after Schumann’s death. 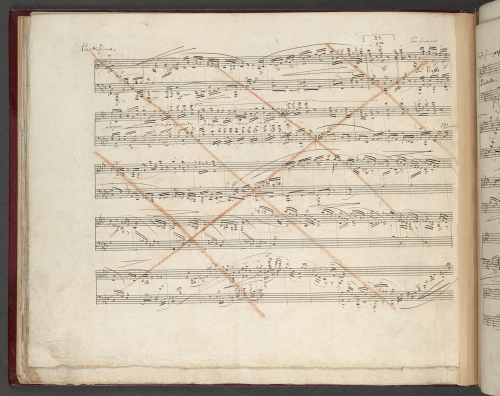 Subsequent editors, and indeed performers of the work, have had to tackle the question of what exactly is the definitive form of the piece. Linda Correll Roesner undertook an almost archaeological study of the manuscript in 19752, using paper and ink colour as evidence of the convoluted chronology, not just of the bigger changes such as the withdrawn movements, but also of the smaller-scale (but nonetheless significant) additions, subtractions, changes and alterations of details. Some of these made it into the first edition, others into the second, while others again did not appear in either! Most the corrections are added in different ink, but some are found on other parts of the page, some are in the form of notes to the engraver and some completely revised passages are on pasted-over slips of paper. 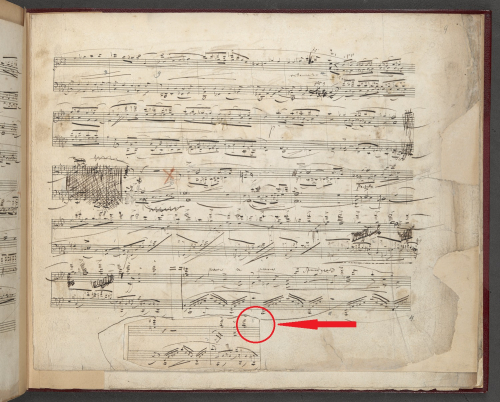 You might notice as you browse through the images on Digitised Manuscripts that there sometimes appear to be duplicates, despite being labelled with different folio numbers. This usually happens when extra bits of paper have been pasted onto the main folio, often where a composer is correcting or amending a passage (such as folio 8 in the image above, stuck onto the bottom of the page). Elsewhere in this manuscript the paste-overs have been separated, allowing us to see Schumann’s original intentions underneath (folio 20 for example, which was originally glued to the edge of folio 19v). 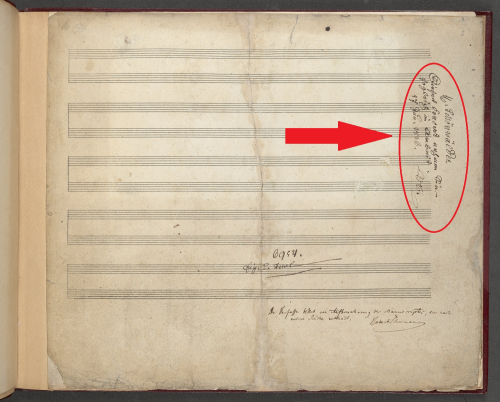 Another layer of annotation on the manuscript relates to more prosaic activities. The note above is from publisher Tobias Haslinger to the engraver ‘Mr Schönwälder’ asking him to make a start on work on 17 June 1836. Markings in pencil throughout show Mr Schönwälder at work, including a note of the planned plate number for the edition and intended line and page breaks.

“... I wrote a concerto for you – and if this does not make clear my love for you, this one sole cry of the heart for you in which, incidentally you did not even realise how many guises your theme assumed (forgive me, it is the composer speaking) – truly you have much to make up for and will have to love me even more in the future!”

Finally, from the material to the poetic. The piece, like much of Schumann’s music, comes with various aspects of autobiography almost encoded into it. Its composition coincided with a period in which Robert was forcibly separated from the love of his life and future wife, Clara Wieck. The theme he refers to appears in full in the slow movement (and can be seen in the image above), although it has not yet been identified from any of Clara’s known compositions. It could be seen as a very public declaration of the connection between the two musicians who continued to inspire each other in the years to come. The five descending notes of the theme went on to become something of an obsession for both Robert and, later, Johannes Brahms, and versions of this idea appear in a number of other compositions by them.4 The theme, or suggestions of it, appears throughout this piece too though, including as the dramatic opening gesture of the whole work – a launch pad into the turbulent and passionate first movement. 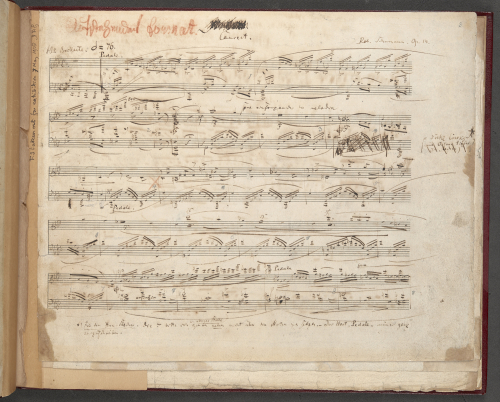 There is a lot in this manuscript, both in the notation and beyond, in layers of evidence and ambiguity. Like many of Robert Schumann's manuscripts (see his later set of piano pieces, for example his Waldszenen in the BnF collections) it is like a graphic realisation of the romantic idea of the wild, turbulent moments of inspiration and creation – whilst at the same time being tempered by reminders of a more prosaic reality.

1. Quoted in the preface to the edition by Ernst Herttrich, published by G. Henle Verlag (2008).