Commodore Matthew Perry’s gunboat diplomacy opened up feudal Japan to western trade paving the way for the 1868 Meiji Restoration. To avoid the risk of colonisation, the restored Imperial government initiated a period of sustained modernisation and industrialisation, adopting western fashions and ideas. Japan embraced western music, adapting it to create a new musical genre called Yōgaku. Music being a potent form of cultural expression, Yōgaku was first introduced into the school curriculum by the Japanese Empire to help forge a modern national identity, and elements of it have remained in such use to the present day. The Japanese Postal Authority released a series of nine stamp issues between 24 August 1979 and 10 March 1981 to commemorate the national music curriculum.

The first series issued on 24 August 1979 includes this 50-yen stamp designed by J. Takidaira (Figure 1) depicting a man standing in front of a ruined castle under moonlight with excerpts of the lyrics and score for Kōjō no tsuki (Moon Over Castle Ruins) by Bansui Doi and Rentarō Taki respectively. 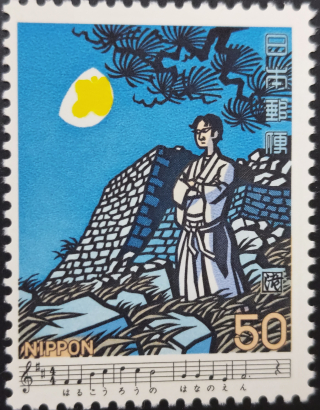 The second stamp (Figure 2) designed by R. Taniuchi illustrates a sunset scene with a boy holding a toy aeroplane beside a girl throwing a ball in the air along with an extract from the score and lyrics for Yūyake Koyake (Evening Glow) produced by the composers Ukō Nakamura and Shin Kusakawa in July 1923. 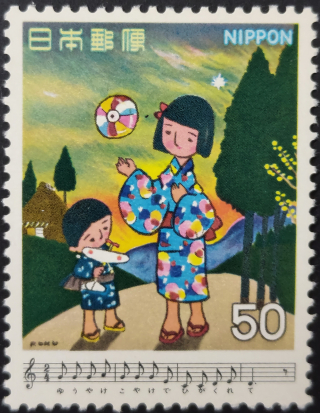 The second series issued on 26 November 1979 both commemorate music by Tatsuyuki Takano and Teiichi Okano.

Hori’s design for the first 50-yen stamp depicts yellowish-red maple leaves being blown off a tree branch beneath the music and lyrics of Momiji (Maple Leaves) written in 1911 for 2nd grade elementary school text books (Figure 3). The second designed by T. Murakami reveals a man holding a parcel walking through a village scene beneath the last four bars and lyrics to Furusato (Birthplace) produced in 1914 for 6th grade elementary school (Figure 4). 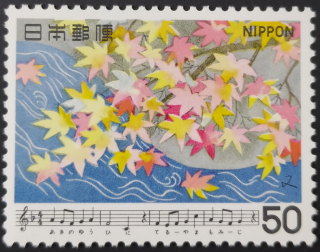 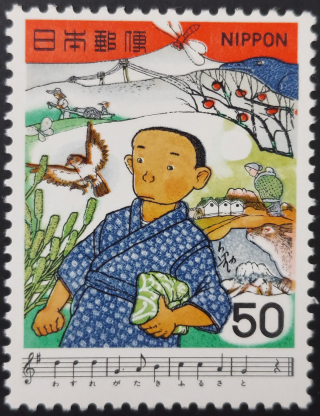 The third series released on 28 January 1980 includes a 50-yen stamp (Figure 5) incorporating artwork by Shigehiko Ishikawa of boats mooring in a watery landscape accompanied by the score and lyrics of Fuyugeshiki (Wintry Scene), composed in 1913 as teaching material for 5th Grade Elementary School. The second one (Figure 6), designed by S. Watanabe depicts Mount Fuji with the music and lyrics to Fujisan (Mount Fuji), composed and published for use by elementary schools in 1910. 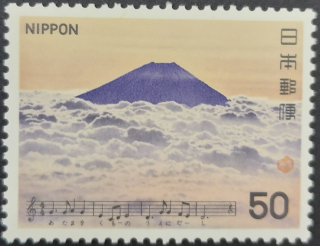 These were followed by the fourth series issued on 21 March 1980. M. Anno’s stamp design (Figure 7) comprises a rural scene accompanying part of the score and lyrics of Haru no ogawa (Spring Brook) composed in 1912 by Takano and Okano for 4th Grade Students. The other stamp by K. Morita (Figure 8) illustrates a young Japanese girl reaching out towards cherry blossom with score and lyrics from the Edo Period song Sakura (Cherry Blossoms). Their inclusion in a publication by the Tōkyō School of Music in 1888 compiled by the Director of Music to the Ministry of Education indicates it has long been in use in the national music curriculum. 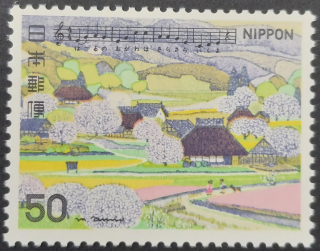 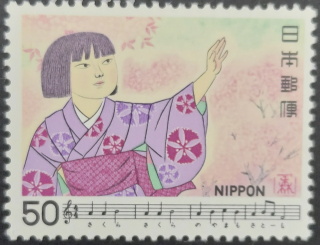 The fifth series issued on 28 April 1980 includes a stamp designed by R. Taniuchi (Figure 9) comprising a young Japanese boy and girl looking out to sea with a boat in the background and with music and lyrics from Umi (The Sea). Created by Ryūha Hayashi and Takeshi Inoue it was first published in ‘First Grade Elementary School Songbook No. 1’ in 1941 to teach 1st Grade students. F. Hori’s design for the second stamp (Figure 10) of flowers and a moon accompany the music and lyrics to Takano and Okano’s work Oborozukiyo (Night of the Hazy Moon), created in 1914 for 6th Grade Elementary School students. 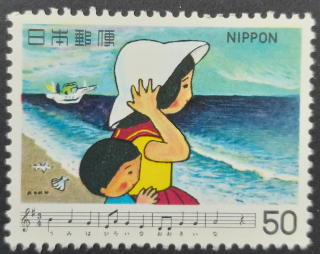 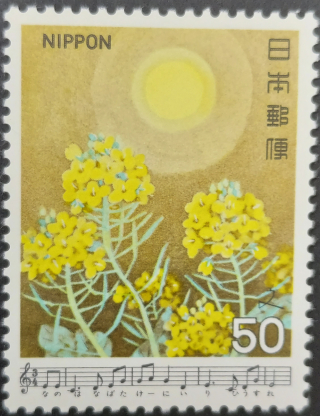 The sixth series issued on 16 June 1980, includes S. Watanabe’s stamp design (Figure 11), a photographic image of the Japanese national flag and a rooftop with the score and lyrics of Takano and Okano’s song Hinomaru (The Rising Sun) used in 1st Grade Elementary classes since 1941. The second by M. Anno (Figure 12) presents a marshland scene with score and lyrics to Shoko Ema and Yoshinao Nakata’s song Natsu no omoide (Memories of Summer). First broadcast in 1949 on NHK Radio it is used to teach 2nd year Junior High School. 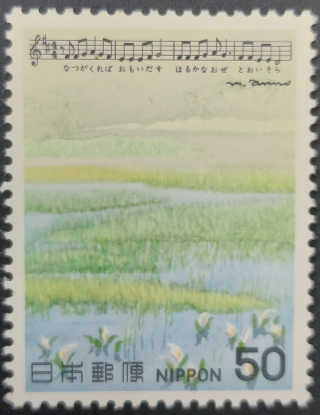 The first stamp (Figure 13) of 7th series issued on 18 September 1980 carries K. Negishi’s image of a woman outdoors holding out her hand to a red dragonfly with music for Aka Tonbo (Red Dragonfly), a song created by Rofū Miki and Kōsaku Yamada in 1927. Included in a collection of children’s stories called ‘The Acorn’ by 1980 it was included in Japan’s national music curriculum to teach 1st Grade Junior High Schools. The second by S. Hayashi (Figure 14) depicts a Japanese woman seated under a night sky with music for Hamabe no uta (Song by the Sea) created by Kokei Hayashi and Tamezō Narita in 1916 as teaching material for 2nd Grade Junior High School. 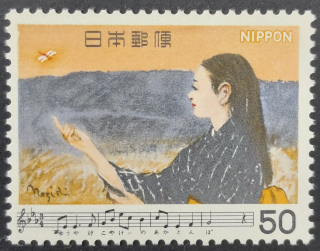 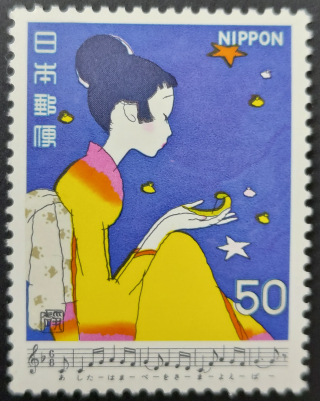 Issued on 9 February 1891, the 8th series includes k. Morita’s design (Figure 15) revealing a mother holding a baby whilst playing a Japanese drum called a den-den daiko. Above this image, is the music for Komoriuta (Lullaby), a traditional nursery rhyme included in a 1941 songbook to teach 3rd Grade students. The second by M. Yonekura (Figure 16) shows a young girl day-dreaming with an island and palm tree in the background accompanied by music to Yashi no mi (Coconut) produced by Tōson Shimazaki and Toraji Ōhaka in 1936 for an NHK Radio series of people’s songs. It was subsequently adopted as teaching material for 3rd Grade Junior High School. 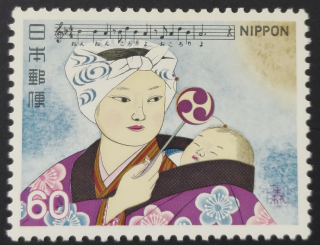 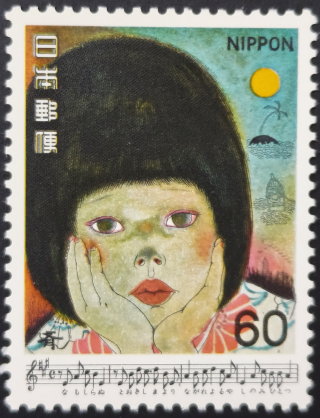 The 9th series sold on 10 March 1981 includes a stamp by T. Murakami (Figure 17) depicting a child playing amongst birds, butterflies and flora with music to Haru ga kita (Spring Has Come) by Takano and Okano, a song written in 1910 for use in 2nd Grade Elementary School. The Final stamp by S. Hayashi (Figure 18) illustrates a woman smelling blossom upon a branch with music to Hana (Flowers), composed by Hogoromo Takeshima and Rentarō Taki for 3rd Grade Junior High School. 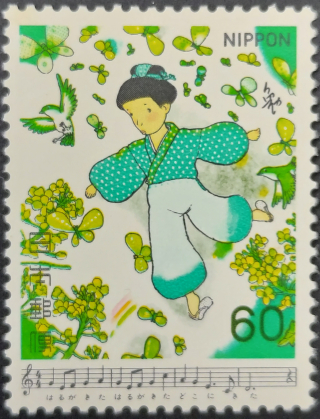 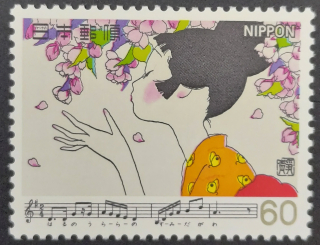 In total 28,000,000 sets of the first six series and 26,000,000 sets of the last two series were photogravure printed in Tōkyō, revealing how stamps comprise a form of mass media. Used postally and collected, stamps transmit multiple memes or units of cultural expression nationally and globally. These nine stamp issues offer more examples of how the British Library’s Philatelic Collections provide an invaluable research resource for musicologists.