Music for a while… for more than 325 years! (a joint RISM-British Library blog post about sources for Purcell's music)

When Henry Purcell died (on 21 November 1695 - 325 years ago today) he was probably one of the best-known composers in England – honoured with a burial at Westminster Abbey no less. But a reputation will only take you so far, and the fact that his music lives on all these years later is thanks in part to it being preserved in sources that have been interpreted and reinterpreted over time. 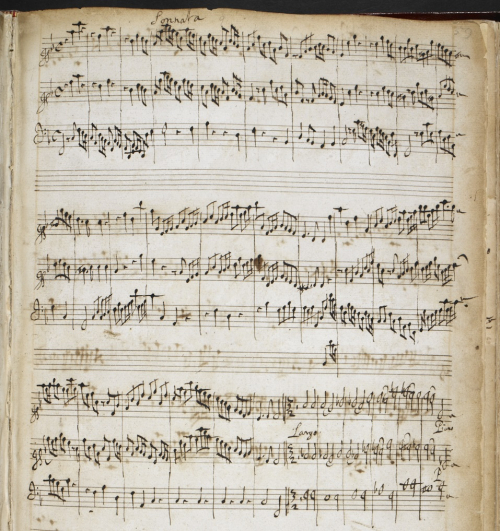 This evidence of Purcell’s music comes in different forms, from scores in the composer’s own hand to printed editions produced for wider circulation. A multitude of manuscript copies, made for all sorts of purposes, enriches the story even more – often giving us a sense of the ways in which the music was actually played by the composer’s contemporaries, and therefore how people would have known it. Later sources can also demonstrate the various routes of dissemination and transformation his music has taken in the centuries since, reflecting changing tastes and viewpoints over time. From 19th -century manuscript copies of Dido and Aeneas to Michael Tippett’s and Benjamin Britten’s arrangements, these all tell us something about how Purcell and his music has been understood – and provides a context for how we interpret it today. 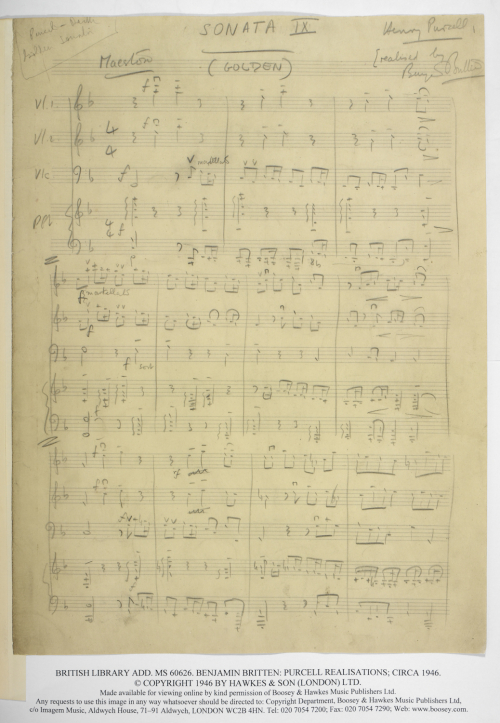 Autograph manuscript of Benjamin Britten's realisation of the Purcell sonata in the first image above.  BL Add MS 60626, f. 1r.

Last month the new RISM UK catalogue was launched, providing everyone with the ability to search for the location of pre-1850 printed and manuscript music sources in libraries, archives and other repositories around the UK (for more information, see our blog post announcing it here). A quick search for Henry Purcell shows that plenty of material can be found all around the country. In fact, Purcell is the composer with the second highest amount of material preserved in British institutions, second only to Georg Friedrich Händel (excluding the ubiquitous Anonymous). Among more than 2,500 results are around 150 autograph scores. The posthumously published collection of Purcell's songs, Orpheus Britannicus, is particularly well represented as well, with copies of the first and second volumes of the first edition (1698 and 1702) in 19 and 21 institutions respectively - and with the second, expanded, edition of 1706 to be found in a whopping 28 institutions. 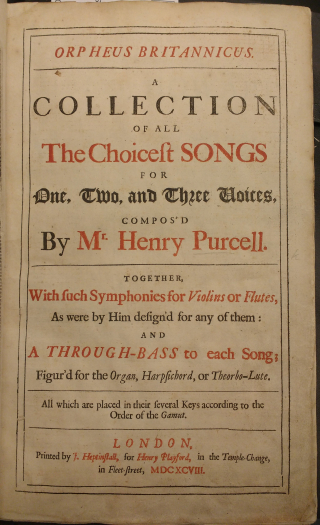 'Ah! Belinda' as printed in Orpheus Britannicus. The first part of Purcell's opera Dido and Aeneas to appear in print. BL G.100.

The RISM UK catalogue is a subset of the international catalogue, and this provides a perspective on the transmission of Purcell's music around the world – with material preserved all over Europe as well as in Australia, Canada, Japan, New Zealand, and the United States. The Library of Congress (US-Wc) holds the largest number of Purcell sources outside of the UK, and in fact around a dozen of these sources are printed editions that can only be found there. The Royal Conservatory of Belgium (B-Bc) also houses a significant amount of music by Purcell, largely thanks to the music collector Guido Richard Wagener (1822-1896): in the manuscript anthologies with shelfmarks 25590, 14981 and 15139 one will find sonatas, keyboard pieces, and overtures by Purcell.

Purcell at the British Library

25 years ago the British Library put together an exhibition to mark the 300th anniversary of Purcell’s death, and it’s great to see that a digital trace of that can still be found online – now almost a historical source in its own right! At the time of the exhibition in 1995, a relatively recent acquisition was the newly discovered autograph manuscript of Purcell’s keyboard music (MS Mus. 1). This was digitised along with two other major manuscript sources in Purcell’s own hand in 2012 – a blog post from the time provides a bit more information about these important volumes. Since then we have also digitised the autograph score of Purcell's ‘The Yorkshire Feast Song’ (Egerton MS 2956). 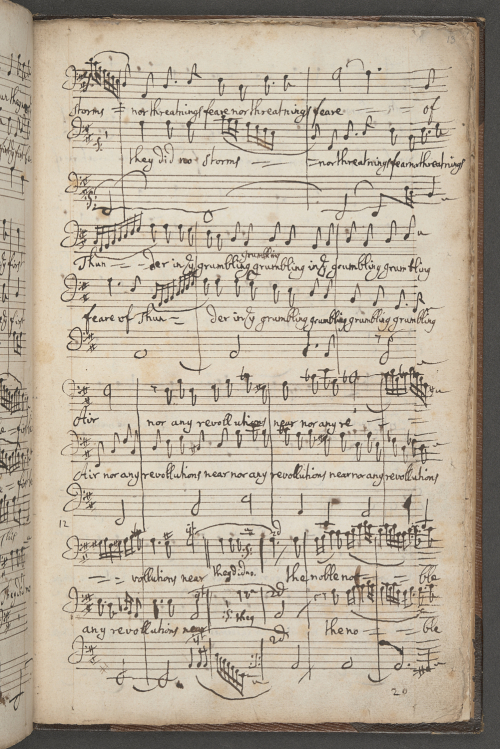 There have also been several new Purcell-related acquisitions since that volume of keyboard music in the 1990s – copies of songs from 'The Fairy Queen', for example, as well as contemporary copies of the songs 'She who my poor heart possesses' (Z. 415) and 'Cease anxious world' (Z. 362) (Mus. Dep. 2016/52).

The most recent acquisition came last year. This is a substantial volume of music mostly for the flute or for the violin and includes what is the only known source for Purcell’s Sonata in G minor (Z. 780). It is currently awaiting attention from our conservation team, but this seems a good time to introduce it and to provide a sneaky peak inside. 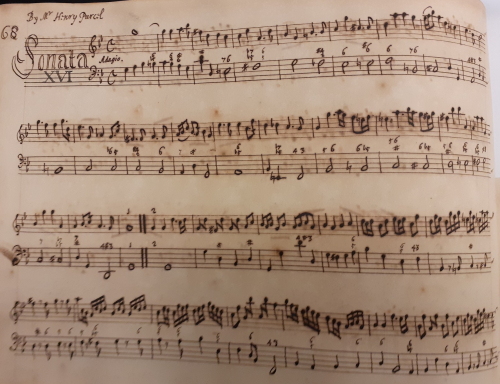 The volume had passed through the hands of several collectors in the course of the 18th and 19th centuries and had been last seen in the early years of the 20th century, when an edition was made of the Purcell piece, very much in the style of the time. 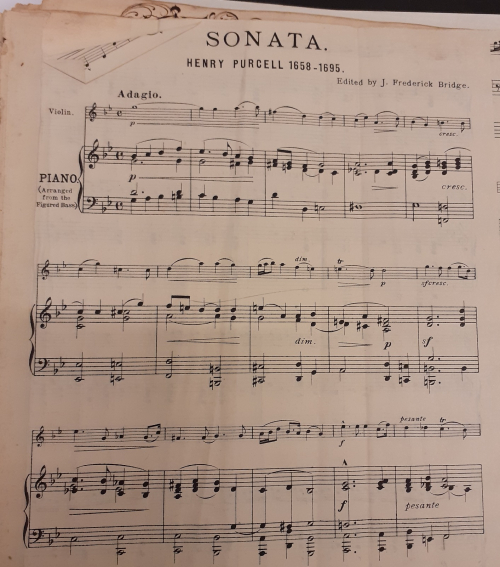 After failing to sell in an auction in 1935, the manuscript disappeared. Despite attempts by Thurston Dart and others to reconstruct the original Purcell piece (free from the idiosyncrasies of the early 20th -century edition), the volume’s whereabouts remained a mystery until 2012, when Peter Holman found it at Spetchley Park.[1]

The volume is known to be the work of two people: William Armstrong (d. 1717) and Edward Finch (1664-1738), both well-connected personalities in musical life of the 1600s and early 1700s. Not much is known about William Armstrong but he certainly played viola in the orchestra in the early days of the Italian Opera at the Haymarket theatre, around 1710, and we know he undertook work as a copyist for various theatres in the early 1700s too. Edward Finch was from a wealthy family and, among other things, seems to have been a proficient player of wind instruments. In particular he was a relatively early adopter of the ‘German flute’, predecessor of the modern flute (the recorder, known then as the ‘common flute’, or 'English flute', had been more popular before that). As part of the volume is in the hand of Armstrong, and the other in the hand of Finch, it has become known as the ‘Armstrong-Finch’ manuscript. The volume is dated 1691 at the beginning, but it is clear that Finch was still adding to it up to at least 1720. 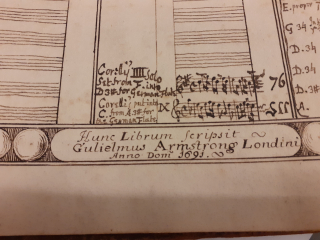 William Armstrong's inscription at the front of the volume. BL MS Mus. 1851.

A sonata copied by Armstrong and Finch's characteristic sign-off, from Christmas 1717.

Besides the Purcell piece, the volume as a whole is of interest especially because of the connections between Finch, Armstrong and some of the prominent musicians they would have known and whose music is represented in the volume – from Purcell and Gottfried Finger to Francesco Geminiani a bit later. Given these connections, it is also a important source of information about all sorts of other things, from the use of ornamentation at the time, to the establishment of the flute as a popular instrument in professional and amateur circles. We hope, as Peter Holman says at in his introductory article to the manuscript, that it will “continue to yield up its secrets for a long time to come”.[1]