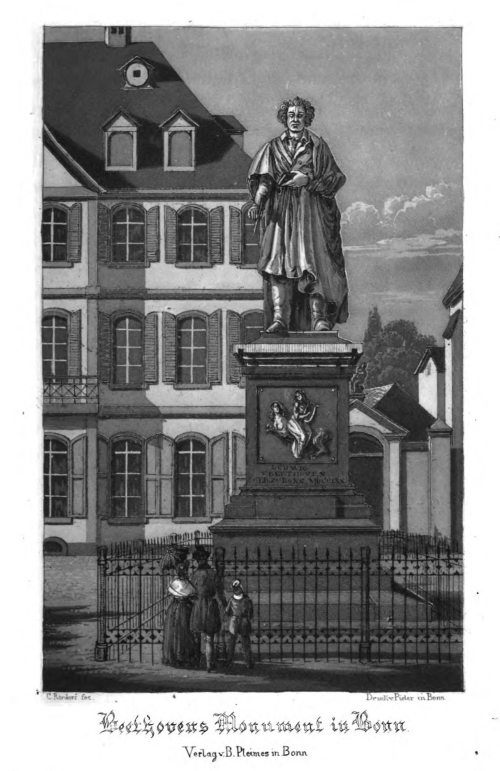 In Spring 2020, music cataloguers working from home were temporarily without access to the British Library catalogue. Our Collection Metadata colleagues were able to supply us with some exported files of catalogue records to work on, and we chose to have sets of records with Ludwig van Beethoven as composer. While our normal work of cataloguing new acquisitions was suspended, due to the closure of the Library site, we set to work improving the quality of these Beethoven records, as a way of working productively at home, and also of celebrating Beethoven's anniversary year in a practical way. The work  complements other departmental activities to mark the anniversary such as the online Beethoven exhibition on Discovering Music, which was launched last month.

About 2000 amended records have now been loaded back into the catalogue. Although there is more work to do, this is a big step towards improving our representation of Beethoven's works.

The work we did was in the area of Authority Control. This is the practice of giving an entity (for example a person, work or subject) a formal, standardised identity in the form of a text string, which is used to draw together all occurrences of the same entity.

For the Beethoven records we improved these identities for work titles. For example, in this basic ‘legacy’ catalogue record the uniform title was updated:

The publisher's title appears at the top of the record. Further down is the "uniform title" (or "preferred title"), constructed by a cataloguer. This is the authority-controlled version of the title, which in this case also holds the secret of exactly where in Beethoven's opera this piece of music comes from. It also identifies it with all the other editions and arrangements of this excerpt, not only in the British Library, but in any other institution using the same international (NACO) standard. It does this in the traditional library way, by being a left-anchored text string, located in a background alphabetical index. The title elements are presented in a conventional order and form. The NACO conventions are essentially those laid down in the mid- to late-20th century Anglo-American Cataloguing Rules. However, the principle of bringing works together under a standardised title goes back a long way, and can be seen in older, printed catalogues.

The Catalogue of Printed Music (1981-1987) was based on older catalogues dating back to the 1840s. When the printed volumes of the Catalogue of Printed Music were converted to machine-readable cataloguing, its headings were imported into the records as uniform titles. Over the years, as records for new acquisitions were created and imported, a variety of different "uniform" titles for the same work have proliferated in the catalogue, complicating the process of searching for a particular work. Aligning all these with the NACO standard is an ongoing task, and this is the work we were continuing in the case of Beethoven. 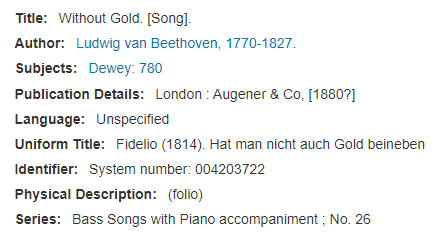 What does this mean in practice?

The major outcome is that, if a user now locates and searches on a standard NACO uniform title, all instances of the work will be retrieved, because we have replaced the variants which formerly would have confused the search.

For example, the standard title "Concertos, piano, orchestra, no. 1, op. 15, C major" will now retrieve all the publications of the work, having replaced variants such as:

Similarly, "Bagatelles, piano, WoO 59, A minor" has replaced variants such as:

The future of uniform titles

Our current cataloguing standard, RDA (Resource Description and Access), allows for traditional uniform titles, but prefers a different, linked data approach. The online environment in which library catalogues now operate requires more sophisticated manipulation of data elements than can be provided by uniform title text strings, which were designed for printed and card catalogues. Also, the implication that there is a single, universally "correct" way of expressing the title of a work, with other versions treated as variants, is something which RDA, as an international standard, encourages us to move away from.

Future library systems will be able to present works and their relationships in a way that is both clearer and more nuanced. Making our data as consistent as possible now will help enormously with this future development. In the meantime, we hope that anyone looking for the works of Beethoven in the British Library's catalogue will find their search a much better experience.