At the turn of the 19th century, British perceptions of revolutionary France and the Napoleonic wars were tied to myriad graphic, literary, and musical expressions. Between soldiers returning home, parading volunteer regiments, and theatrical renditions of war, the multiplicity of these imaginings were transformed and transported through print at a remarkable speed. After appearing in the London gazette, official news from the continent would go on a multimedia journey: passing through detailed (though often inaccurate) accounts in national and provincial newspapers; enduring the scrutiny of pamphlets and journals; being subjected to judgement in sermons; and set in public memory through the mockery of satirical cartoons.

Printed music was better placed than other media to incorporate military images because the large format of music publications meant that there was ample space on the title page for additional decoration. Taking advantage of the fashion for all things military, music publishers rushed to produce commemorative editions of battle music. In the months following The Battle of Camperdown (11 October 1797) Music publishers Joseph Dale, Longman & Broderip, and Corri, Dussek & Co. produced commemorative works celebrating the victory. They used the textual and graphic elements of the score to shape them into military souvenirs.

The cheaper editions (selling for between 1s 6d and 2s 6d), such as Joseph Dale’s, featured a standard unadorned title page. As was the practice with most editions of battle music, Dale fashioned the score into a commemorative object by including a date on the title page. This set these editions apart from other printed music of the period as publication dates were usually omitted to prevent later reprints seeming old or out of fashion. This shows that publishers considered the publication date to be part of the commercial appeal of these editions, so they were not concerned by the ephemerality this imposed on the printed object. 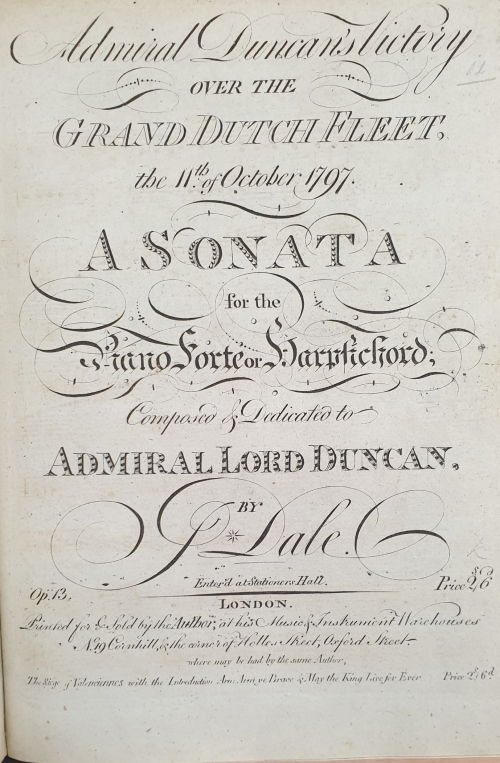 Longman & Broderip’s edition of Britannia by Daniel Steibelt (1765 - 1823) dresses the title in British imperial iconography, with a laurel wreath crossed with flags of the British empire. The naval scene at the foot of the title page captures the moment when the British flagship Venerable inflicts the final blow on the Dutch flagship Vryhied. Camperdown saw Duncan celebrated for his bravery and leadership, having taken his flagship into the heart of the action and in difficult waters. By using this moment at the battle’s climax, the score immortalises Duncan’s bravery and Britain’s naval dominance. 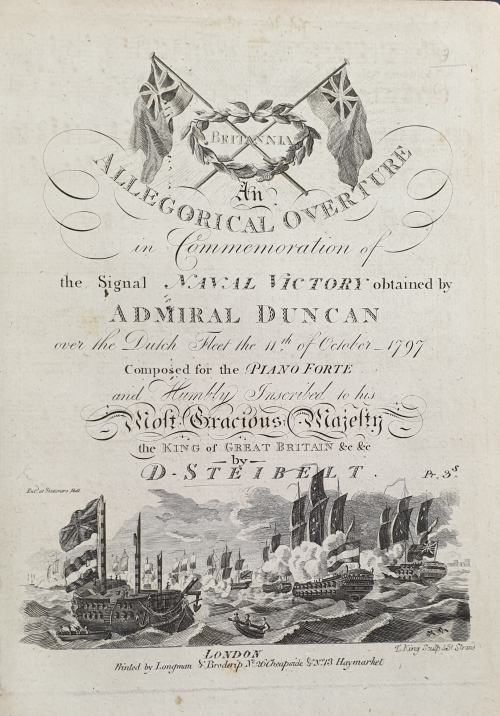 The celebration of Duncan was not only due to his perceived courage but also the sheer extent of his victory. Within three hours of the start of the battle, Duncan was not only able to report a British victory but also the capture of eleven Dutch ships. Music publishers Corri, Dussek & Co. chose to show this side of the battle in their commemoration, avoiding the engagement itself and focusing on the outcome. Their chosen image emphasised the ‘Total Defeat’ of the Dutch fleet by showing their captured ships in tatters, being towed back to Britain, the punctured sails and post victory setting reminiscent of Thomas Whitcombe’s painting of the battle (1797). 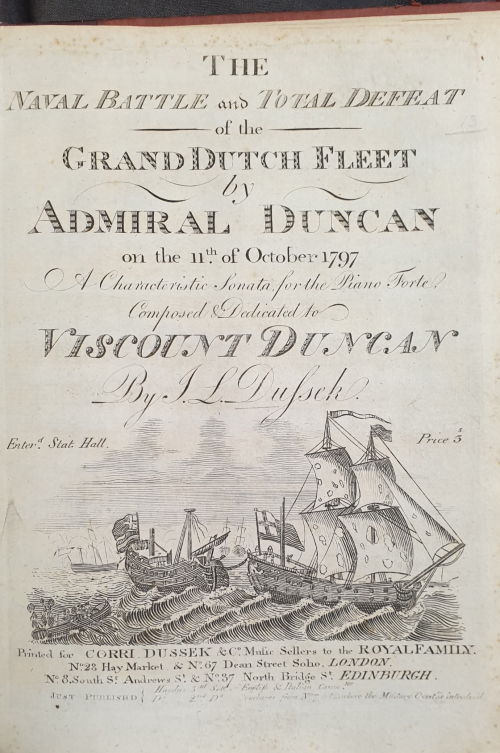 The commercial opportunities that arose around the Napoleonic wars were not limited to events happening abroad, but also covered celebrations at home. In 1798 Corri, Dussek & Co. published the descriptive piece A Complete & exact delineation Of the Ceremony from St. James’s to St. Pauls: … to return thanks for the several Naval Victories obtained by the British Fleet over those of France, Spain, & Holland. The naval thanksgiving (1797) enlisted the full theatricality of public spectacle, involving the monarchy, government, members of the army and navy, and ordinary Britons lining the streets accompanied by bespoke music written by J. L. Dussek (1760-1812). The score provided an audio-visual reproduction of the event: it contained music written for the procession and church service and captured the visuality of the occasion through an ‘elegant Frontispiece’, which is unfortunately now lost.

George III conceived the event to rival the civic ceremonies of revolutionary France in an attempt to promote a sense of national unity in Britain. This impact, however, was limited to those who lived near enough to London to attend the ceremony. The success of the occasion relied heavily on newspapers and periodicals circulating accounts to other parts of the country, but Corri, Dussek & Co.’s musical edition was unique in its capacity to deliver both the visual and audial spectacle to those who had not witnessed the event. This edition gave people who did not live in London the opportunity to experience and take part in the patriotic symbolism of the ceremony from afar.

The hype surrounding military victories provided a market for commemorative print in the short term, capitalising on spikes in patriotic sentiment and the celebrations linked to the events. In this context music scores became collectable objects alongside commemorative pottery, porcelain, and medals, together projecting idealised images of war and victory. They helped to facilitate celebration by reminding purchasers of important dates in the national calendar and providing the music with which to celebrate them. The graphic and textual additions to printed music meant that scores had commercial value beyond their musical content and appealed to the conspicuous consumption of print buying audiences, the visually idealised militarism of the title pages allowing Britons to fulfil their patriotic duty through purchasing the score.