Lithography and the satirical song sheet

Alongside the religious and art music published during the 19th century, there was a substantial market for printed popular songs. The music of the London theatres and pleasure gardens had cultivated a steady demand for engraved song sheets throughout the 18th century, but the invention of lithography by Alois Senefelder (c.1797) injected a new graphic vitality into the genre. In a flurry of editorial experimentation brought about by lithography, printers played with the combination of music and image through the production of satirical song sheets. These were typically musical scores which featured a title page image as well as humorous caricatures that surrounded the notation adding a visual accompaniment to the musical narrative. 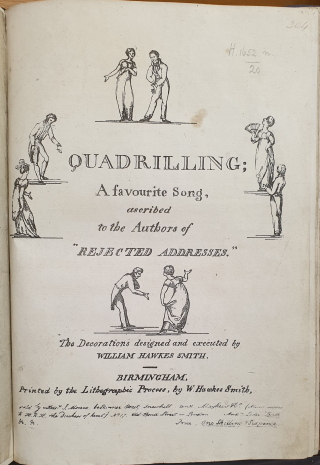 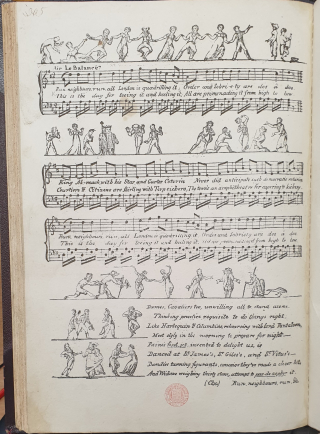 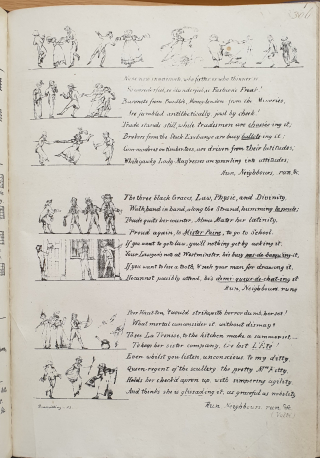 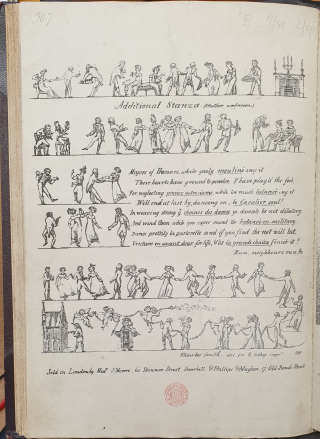 Lithography offered a number of benefits over the engraving and etching that dominated music printing in the 18th and 19th centuries. Instead of engraving images onto metal plates with punches and burins, artists could use familiar materials such as crayons and pencils. It was even possible for the artist to work directly onto paper (with a special greasy ink) and for the printer to then transfer the image onto the absorbent stone used for making impressions. Drawing on a stone could be done ‘in the same way as one would execute a drawing on paper with ink or common chalk.’[1] This made it easier to reproduce maps, topographical plans, landscape drawings, portraits, and other works and, as Senefelder put it, ‘it has been generally observed that drawings of the less excellent artists, appear to greater advantage on stone, than on copper.’[2]

The precision of etching and engraving meant that it remained the dominant method for printing music in the 19th century, but the graphic flexibility and accessibility of lithography encouraged non-musical printers to experiment with music notation. Printers who specialised in graphic prints, keen to show off the capabilities of the new technology, jumped at the chance to apply lithographic techniques to printed music. One such publisher was William Hawkes Smith (1786-1840) of Birmingham. Smith was primarily an author and draughtsman who notably produced a set of illustrations for Robert Southey’s Thalaba the Destroyer.[3] In 1821 he published QUADRILLING; A favourite Song, ascribed to the Authors of ‘REJECTED ADDRESSES.’ [Figures 1-4] The edition was designed to show off Smith’s lithographic skills as the title page boasts, ‘Decorations designed and executed by WILLIAM HAWKES SMITH,’ and explicitly advertises the work as ‘printed by the Lithographic process.’

The song satirises the quadrille, a popular contemporary square dance for four couples. The title page features images of four respectable-looking couples standing in formation preparing to dance, setting up for the cacophony of humorous imagery on the following pages. The score contains just three lines of music overwhelmed by images that visualise the musical comedy: surrounding the stave and song text are depictions of different social classes attempting the dance.  Courtiers and citizens dance together, a man is pickpocketed as he falls over, Terpsichore (Greek muse) dances amongst men holding her lyre, and baronets, moneylenders, brokers, lawyers, and scullery maids are all made fun of in the commotion.

Although the combined novelty of a song sheet and a satirical cartoon must have impressed contemporary print- and music-buying audiences, this edition reveals a technology in its infancy. The smudging, inconsistent thickness of the text and the almost illegible publisher information at the foot of the title page [Figure 1] suggest that Smith had not yet mastered the new printing technique. Teething issues like these slowed down the uptake of lithography in the early 19th century, but technical treatises were published outlining solutions to the problems faced by those new to lithography.

Raucourt's A Manual of Lithography (1832) addressed some of the issues Smith faced. It explained in some detail what the printer should do if ‘the impressions are pale’, ‘The impressions are uneven’, ‘A part of the impression is wanting’ with over 100 other pieces of advice on mixing ink, cleaning and polishing the stones, etching drawings, imitating woodblocks etc. To fix the uneven impressions in this edition (most noticeable on the third line of notation (figure 2 and at the top of figure 3), for example, Smith would have had to ‘Increase the pressure of the scraper until it [took] up all the ink.’

Part of the image is missing at the top of the second page [Figure 3]. The manual suggested that this meant 'The stone, or the scraper, is not level: if this accident proceeds from the stone, some paper must be pasted on the leather of the box.' A later copy of Quadrilling (held at the Lester S. Levy Sheet Music Collection) suggests that these problems persisted throughout the process with faded and incomplete sections appearing in different parts of the score as the publisher worked to correct the mistakes. In the later copy Smith has also omitted the illegible text from the title page of the previous edition.

Manuals like this one helped to improve the quality of lithography in Britain and by the mid-1820s Smith seems to have perfected the process. In 1825, Smith published Washing Day: a proper new Ballad for wet weather [Figures 5-8]. The song was a popular ballad that made fun of a wife’s temperament on washing days. Clearly more confident in his abilities Smith was now trading as ‘the Lithographic Press.’ The title page of Washing Day attests to his technical improvement: the precise lines and contrasting textures of the text and image show a fluency not apparent in the comparatively clumsy printing of Quadrilling. 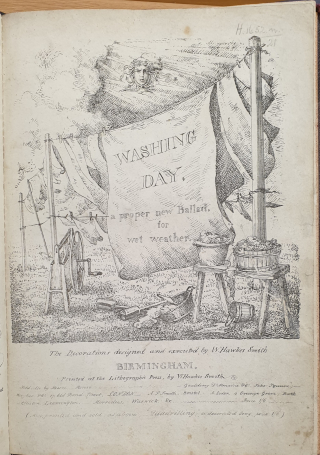 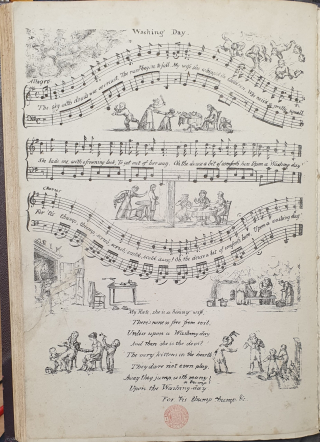 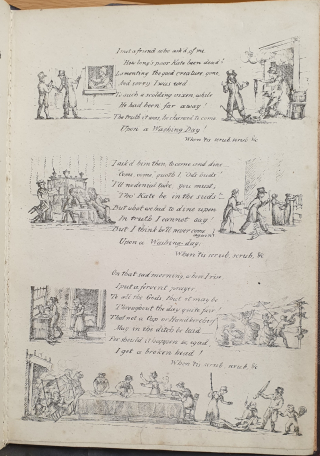 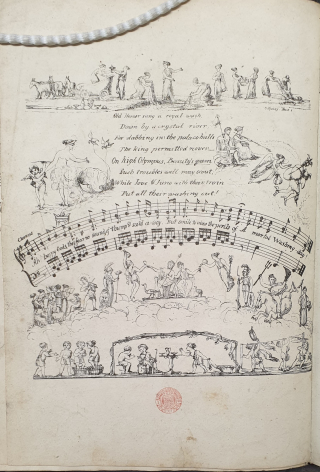 Inside the score, we also see a printer more confident in his experiments. Rather than the images following the stave, the music physically bends around Smith’s cartoons and the lines of the stave become part of the graphic comedy. The notation yields to the windy weather depicted on the title page as it is literally blown out of shape by cherubs (top right of figure 6) and as the husband is told ‘with a frowning look, To get out of [his wife’s] way,’ the staves also move to avoid her. Women were often satirised in 19th-century popular songs and here the visual and musical comedy combine to reinforce the sharply defined gender roles of Victorian society.

The printed music collections at the British Library are particularly rich in this kind of visual material but satirical song sheets are currently difficult to find. They are usually catalogued as ordinary song sheets (with the first line of the song used for the catalogue title) and the graphic elements of the scores are seldom included in catalogue record. Satirical song sheets have thus received little scholarly attention, but each of these editions provides a unique insight into the creative responses of publishers to new printing technologies and help us to understand the interplay between the print and music trades during the 19th-century.

[1] Colonel Raucourt, A manual of lithography, or memoir on the lithographical experiments made in Paris, at the Royal School of the Roads and Bridges ... Translated from the French, by C. Hullmandel., ed. Charles Joseph Hullmandel, Third edition corrected. ed. (London: Longman, Rees, Orme, Brown, Green and Longman, 1832), 86-7.

[2] Johann Nepomuk Franz Aloys Senefelder, A complete course of lithography ... accompanied by illustrative specimens of drawings. To which is prefixed a History of Lithography ... With a preface by F. von Schlichtegroll. Translated from the German by A. S[chlichtegroll] (London : Printed for R. Ackermann, 1819. (W. Clowes [printer]). 1819).