The Royal Music Library represents the music interests and collecting efforts of several British monarchs and members of the royal family. Establishing the line of provenance for the majority of individual volumes in the collection is a challenging task, however, as apart from notable exceptions, such as the Handel autographs that formed part of George III’s music collection[1], volumes with music by Agostino Steffani that were brought to England from Hanover by George I, volumes belonging to Prince Albert and Queen Victoria, and other examples, it is not possible to ascertain to which member of the royal family individual volumes belonged to. This is especially the case with pre-19th century volumes, as both Prince Albert and Queen Victoria were also keen collectors of antiquarian music, which means that 17th- and 18th-century volumes in the collection were not necessarily acquired then.

A three-month project at the British Library is helping to answer some of the questions regarding provenance of individual volumes in the collection, through bibliographical research on certain characteristics of manuscript and printed volumes, such as binding types, copyists’ handwriting, ownership marks, and other. This blog discusses a particular sub-collection in the Royal Music Library and its Italian connections.

A number of volumes in the Royal Music Library are bound in cream vellum, with a (faded) title on each spine [Figure 1]. The vast majority contain what we might call ‘manuscript editions’ - a manuscript copy of a piece of music designed to be sold in a music shop as with a printed edition. These are often identifiable by the presence of an ornate title page or price, or the publisher's imprint, engraved or handwritten, though these are not always present. In the volumes examined in this sub-collection, each contains a number of manuscript editions of works by late 18th-century/early 19th-century Italian composers, such as Jommelli, Paisiello, and Cimarosa, most commonly short selections from Italian operas of the period. 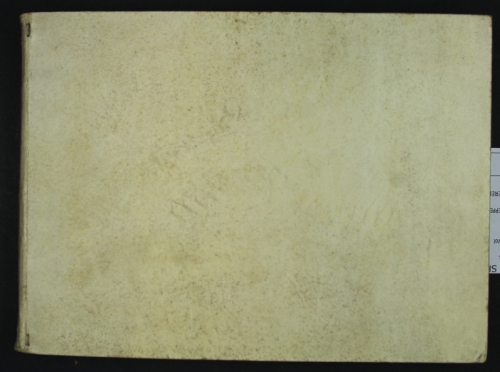 Upon first glance, the variety of copyists and publishers contained within individual volumes suggests that binding occurred much later than purchase, and was undertaken by persons other than the first owner(s). Indeed, in some volumes, editions bearing the initials of more than one former owner have been bound next to each other. In general, each volume contains the musical hands of a number of different copyists, based mainly in Venice or Naples, both major music publishing centres in the late 18th century. There are significant overlaps in copyists’ hands across the collection, suggesting that the editions were acquired by their original owner(s) at around the same time. Indeed, even where several copyists’ hands are present, editions often bear the same style of title page, pointing to groups of copyists associated with specific publishers.

In some cases, it is possible to identify a publisher (though not the copyist) by name, based on the presence of ornate title pages. The name of the publisher Alessandri e Scattaglia (active 1770-1803), for example, is printed clearly on the example in Figure 2. 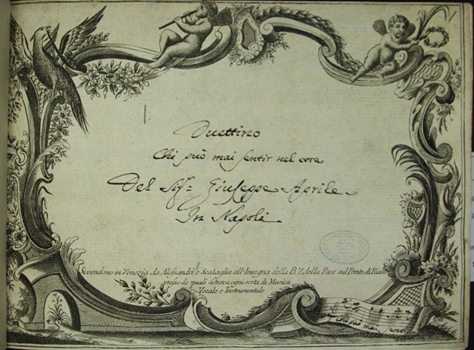 It is sometimes possible to extrapolate this kind of information across volumes. The title page in Figure 3, for example, bears the name of the publisher Luigi Marescalchi, active first in Venice (1770-1775) and then in Naples (1785-1799). The distinctive design also appears on the title page of an entirely different edition in another volume; we can surmise therefore that this was also sold by Marescalchi. 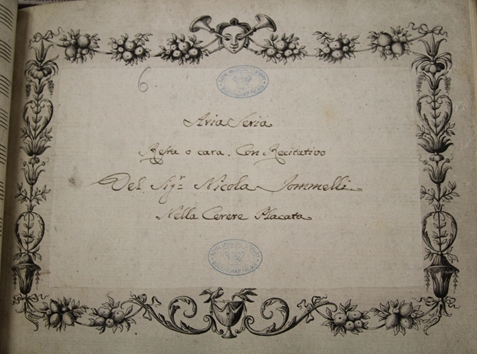 However, it is best to be cautious when identifying the publishers of manuscript editions. The functions of publisher and distributor in late 18th-century Italy were vaguely defined, and publishers sometimes moved around, muddying the waters when it comes to establishing the location of a particular publication.[2] For the purposes of establishing the line of provenance for this sub-collection, however, this kind of detail is not essential. It is enough to conclude that the broad similarities encountered here between volumes suggest that most of the music contained therein was acquired in Italy, in the late 18th century, probably in Naples and Venice, and subsequently brought back to England.

There are several indicators of former ownership which help us to establish who may have purchased these manuscript editions in Italy. On the title pages of several individual tracts, and on one front binding, the names 'Cawdor' and 'Elizabeth Campbell' denote ownership. This couple were John Campbell (1790-1860), 1st Earl Cawdor, and his wife Elizabeth (née Thynne of Bath) (1795-1866). The first Earl’s father, 1st Baron Cawdor (1753-1821), also John Campbell, was a dedicated antiquarian, acquiring such an extensive art collection that he was able to exhibit it in his own home on Oxford Street from 1790 to 1800.[3] Both he and his wife Caroline were keen patrons of the arts, particularly Italian opera, and visited Italy on numerous occasions, where they are known to have purchased numerous pieces of art and sculpture, particularly in Naples and Sicily. Extensive travel diaries of the European travels of both John and Caroline are held at the Carmarthenshire Record Office.[4]

It is likely therefore that much of the manuscript music in this sub-collection may have been purchased in Italy by John Campbell, 1st Baron, and inherited later by his son, John Campbell, 1st Earl. The Earl inherited his parents’ love of music, and retained a serious and scholarly devotion to the subject for the rest of his life, so he is likely to have cherished his father’s music, and no doubt added to the family collection. John and Elizabeth married in 1816, and in 1817 travelled to Italy as part of their honeymoon trip, and it is possible that they purchased music during their travels.[5] 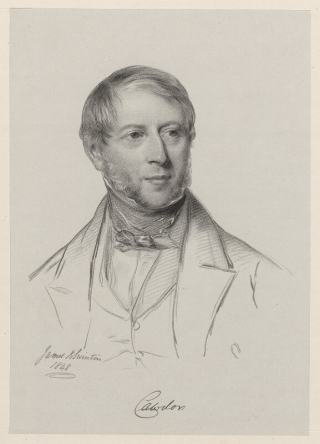 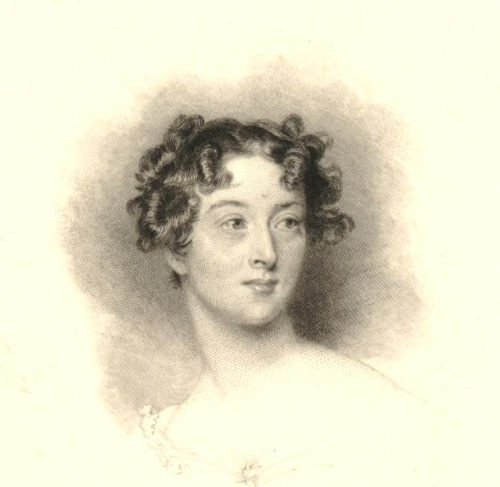 Figure 6: Portrait of Elizabeth, Countess Cawdor after Lawrence. 1832. © The Trustees of the British Museum.

It is often Elizabeth’s name (either as Campbell or Cawdor) that appears on an individual edition, sometimes accompanied by ‘1817’, suggesting either that she acquired in Italy in 1817 or, perhaps, that she was gifted it by her husband upon marriage. Elizabeth’s travel diary from the trip survives, and in it, she frequently provides criticisms of pieces of art she encounters, demonstrating more than a passing knowledge of artistic quality and taste.[6] With further research, it may therefore be possible to establish whether she did in fact buy music in Italy during her honeymoon. Overall, although it may not be possible to establish exact circumstances of purchase by the Cawdor family, it is reasonable to conclude that, by the 1820s, the vast majority of individual editions in this sub-collection belonged to John and Elizabeth, First Earl and Countess of Cawdor.

The second part of this blog, to be published in a few weeks’ time, will follow the journey of these vellum volumes from the Cawdor family to Prince Albert, and through him, to the Royal Music Library of today.