As we come into the final few days of our Beethoven: Idealist. Innovator. Icon exhibition, open until Sunday 24 April, we are concluding our series of Beethoven blog posts with a blog dedicated to Beethoven’s legacy.

Join us also for our last events celebrating Beethoven on Friday 22 April at 19.00: Beethoven in concert, with the Academy of St Martin in the Fields and the Bach Choir and on Saturday 23 April at 19.30: Late at the Library: The Will Gregory Moog Ensemble.

Drawing from the rich collection of Beethoven material kept at the Library, the objects on display have given visitors a unique opportunity to experience the composer’s manuscripts, published scores, notebooks, letters, and personal belongings in the flesh. The immediacy of Beethoven’s chaotic handwriting shows his creative imagination at work, his personal notebooks reveal an individual troubled by progressive hearing loss, and his letters show that Beethoven was as much an astute businessman as a composer. But whilst the intimacy of these objects gives us access to Beethoven the individual, it remains difficult to gain a single perspective on the composer.

It is the often-ambiguous image of Beethoven that carries his influence through music, literature, and the visual arts; to frequent adaptations and reinterpretations in popular culture; and that has allowed his music to be appropriated by diverse (often conflicting) political movements since his death. Beethoven’s image was elusive even during his lifetime. Prints of the composer circulated widely in Europe, and likenesses were contested by his contemporaries and even by Beethoven himself. The exhibition features several depictions of Beethoven that show the changing image of the composer in his life, death, and legacy. 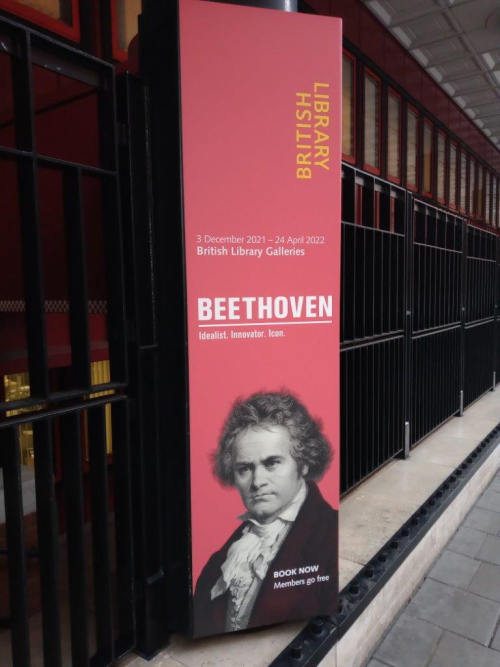 The title image of the exhibition recreates a portrait of Beethoven by Carl Jager (1870). The painting was completed over 40 years after Beethoven’s death. It shows a highly Romanticised image of the composer with a thoughtful look and swept-back hair. After its completion, an engraved version was printed and distributed by major publisher Frederick Bruckmann who traded in Berlin, Paris, New York and London.

Johann Peter Lyser’s sheet of Beethoven sketches (1833) include a full-length image of Beethoven in a top hat and coat and one of his head in profile. Although Lyser had never met Beethoven, the lithograph was considered a good likeness and was popular throughout the 19th century. Lyser produced the image from written descriptions of Beethoven but implied its authenticity visually by writing ‘Created after an original drawing’ below the image and including a copy of Beethoven’s signature. The British Library’s copy of the print made its way to England via Ignaz Moscheles, co-director of the Philharmonic Society in London, who included it in his autograph book. 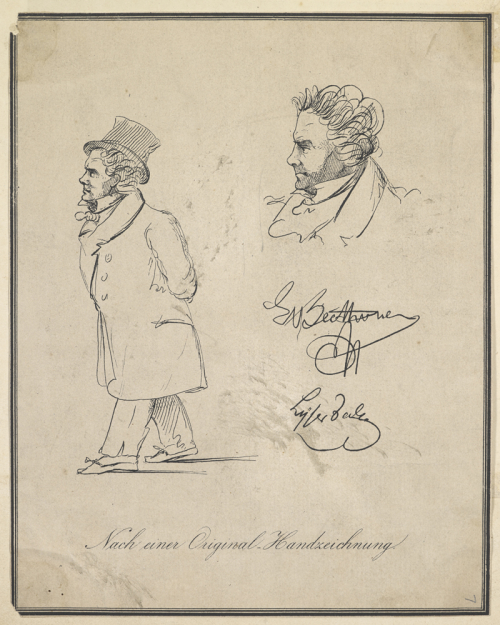 One of the most striking moments in the exhibition are the sketches made by Austrian painter and lithographer Josef Teltscher who attended Beethoven at his deathbed. The two images show a rough sketch of the deathbed scene (right) and a touched-up version (left). Teltscher’s depictions sit on the boundary of Beethoven’s life and legacy. The rough sketch on the left shows a stark representation of Beethoven’s death, departing life with fists clenched, hair dishevelled, and face grimaced, whilst on the right we are presented with an image of Beethoven at rest, his softened facial features and pillow detail remarkably peaceful in contrast. Between these two images we see the Romanticisation of Beethoven in process: the immediate observations of the artist’s preliminary sketch followed by the idealised reconstructed image, perhaps ready for reproduction in paint or print. 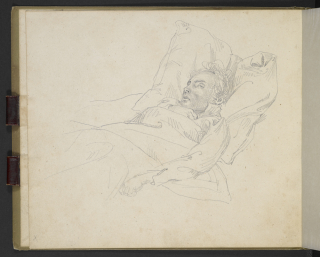 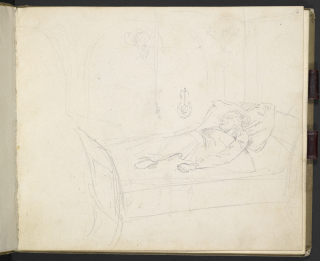 At the centre of the final section of the exhibition on Beethoven’s legacy sits a bust of Beethoven, copied from one sculpted by Johann Nepomuk Schaller (1777-1842). The bust presents the Romantic image of Beethoven in full swing. His swept back hair, classical attire, and piercing look form one of the most recognisable images of the composer today. The bust was donated to the Philharmonic Society in 1870 and has featured at every Society concert since 1871. The Society have adopted this image of Beethoven as 'a symbol of enduring musical excellence', and use the image for their prestigious gold medal. 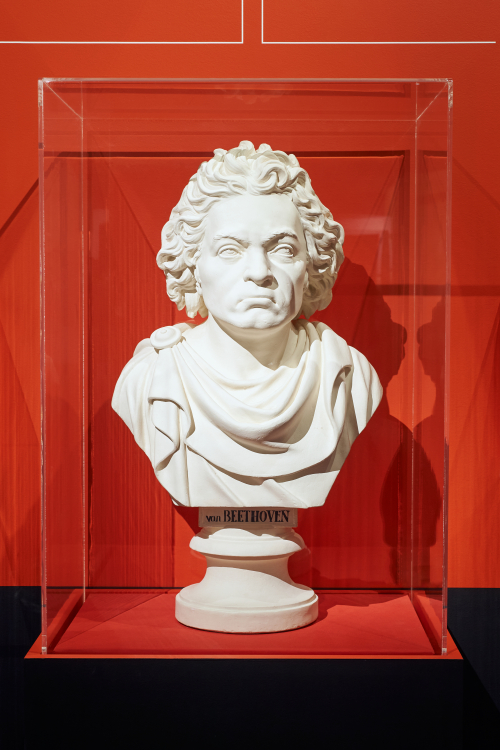 Plaster bust of Beethoven from one sculpted by Johann Nepomuk Schaller (1777–1842). ©British Library Board, BLWA 43. Photography by Justine Trickett

Since the production of contemporary prints, the deathbed sketch, and Schaller’s iconic bust, Beethoven’s image has become ubiquitous in popular culture, reimagined in the screen prints of Andy Warhol (1987) and in Terry Adkins’ Synapse (2004) as part of his Black Beethoven series.

The legacy section of the exhibition provides a glimpse of the myriad ways Beethoven has influenced art, politics, and popular culture over the past two hundred years. Visitors are invited to contemplate the adoption of Beethoven’s music by a diverse range of political movements, his influence on countless composers, writers, and visual artists, and how his music and image have frequently found their way into popular culture.

A pamphlet of Wartime Songs from the BBC (1944) broadcast to Nazi-occupied France sees Beethoven’s music playing a part in the V for Victory campaign during the Second World War; May Byron’s romanticised fictional account of the composer’s daily life (1910) show his image being adopted into popular literature; Charles Schulz’s yearly celebration of Beethoven’s Birthday in his Peanuts cartoons brought Beethoven to a younger audience; and the Voyager Golden Record sees Beethoven’s music sent drifting out into deep space. 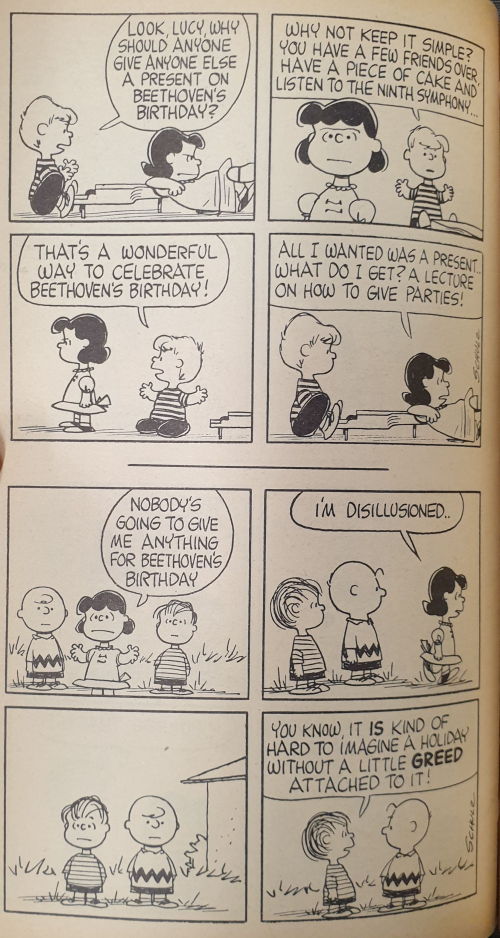 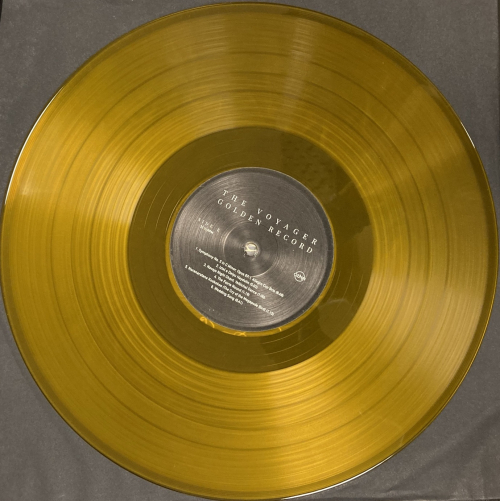 The ‘Golden Record’ which included the first movement of Beethoven’s Fifth Symphony and the ‘Cavatina’ movement from the String Quartet in B flat major (opus 130). 1ss0013021

There are only a few days left to experience this Beethoven material on display, until the exhibition itself becomes part of Beethoven’s legacy. But the items on show only scratch the surface of the Beethoven material available at the library, and readers will be able to explore Beethoven through the rich physical and digital collections that have made this exhibition possible.

Of the exhibits in our current Beethoven exhibition, no fewer than 12 come from the collection of autograph manuscripts assembled by the Austrian writer Stefan Zweig, and generously bequeathed to the British Library by his heirs in 1986. 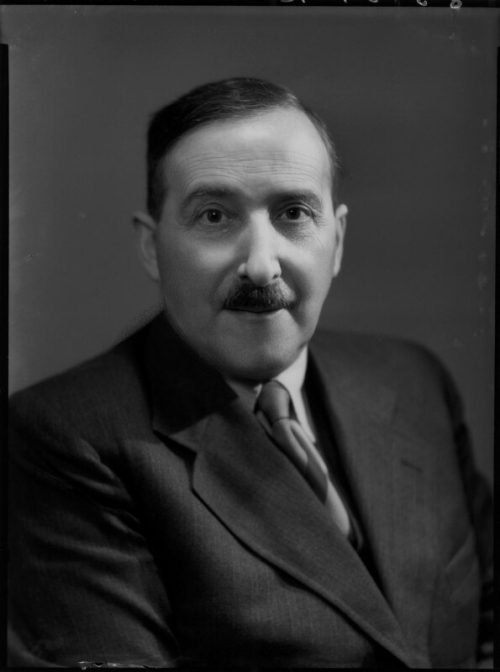 Stefan Zweig as a collector

Zweig was a keen collector of autographs from an early age and built up one of the finest collections of its kind. He particularly sought out examples which he felt showed the process of creativity in the writers, composers and other historical figures he most admired. Beethoven was certainly one such, and fitted Zweig’s image of the true creative genius, but most of Zweig’s Beethoven material in fact comprised not music manuscripts that show Beethoven the genius composer at work, but items such as letters and notebooks that shed light on Beethoven the man.

This was no doubt in part because Zweig had an equally wealthy and eager rival when it came to collecting Beethoveniana, the Swiss bibliophile Martin Bodmer, but Zweig also had a liking for ‘relics’ of great men as well as actual examples of their work. One of his happiest moments as a collector came in 1929 when he was able to purchase Beethoven’s writing-desk and various other realia once belonging to the composer, such as a lock of hair, a violin and even a compass, from the descendants of Beethoven’s friend Stephan von Breuning. (These were later acquired by Bodmer and are now in the Beethoven-Haus in Bonn.)

Exhibits from the Zweig collection in the Beethoven exhibition

Two of the items from the BL Zweig manuscripts currently on display show a very humdrum side of Beethoven’s life: a laundry list and a page of kitchen accounts. The latter gives a glimpse into Beethoven’s diet: a lot of meat, bread and potatoes, spiced with mustard and horseradish, and washed down with wine and rum. Vegetables do feature, but usually lumped together as ‘Zuhspeis’ (literally a ‘side-dish’). Perhaps this was one of the reasons for his frequent ill health, referred to with a dash of self-deprecating humour in a letter of 1817 inviting his friend Johann Bihler to visit and mentioning that ‘Dr Sassafras’ will also be in attendance – a reference to the diuretic sassafras root. 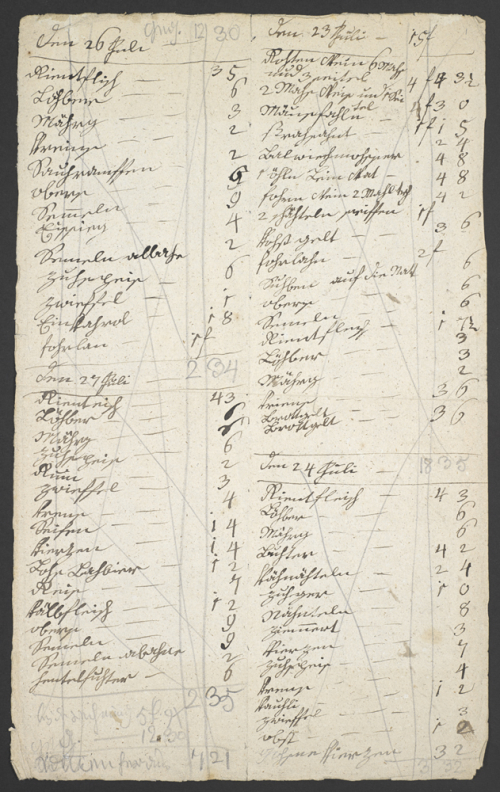 Other items show more ‘elevated’ aspects of Beethoven’s life. A notebook from the early 1790s lists expenses from his first months in Vienna, including a series of composition lessons with Joseph Haydn, the main reason he had come to the city. Another collection of notes from 1815 contains transcriptions of poems by Johann Gottfried Herder with some snatches of music and some reflections on nature by Beethoven. By this time Beethoven’s loss of hearing loss was very advanced, but he writes that this seems not to trouble him in the countryside and that “every tree seems to speak to me, saying ‘Holy! Holy!’” Despite a number of health and personal problems at this time, another piece from 1815 strikes a similar note of optimism: a short three-part canon written in the autograph album of fellow-composer Ludwig Spohr sets words from a play by Friedrich Schiller, “Kurz ist der Schmerz und ewig ist die Freude” (“Pain is brief and joy is eternal”). 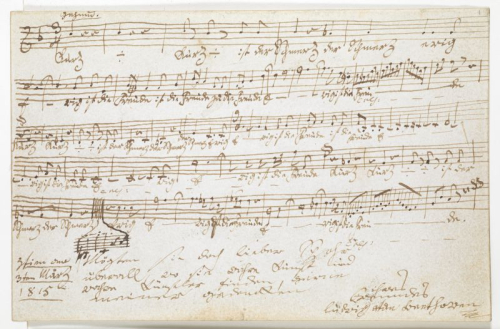 Beethoven’s admiration for Schiller’s work would culminate of course in the setting of the ‘Ode to Joy’ in his Ninth Symphony, but he also set works by the other literary giant of the age, Goethe. Zweig was particularly pleased to acquire the manuscript of the song ‘Die Trommel gerühret’ (‘The drum is beaten’) from Beethoven’s incidental music to Goethe’s play Egmont as it combined the work of both men. In the play the song is sung by Egmont’s mistress Clärchen, who dreams of dressing as a soldier to follow her beloved to war. It is one of the pieces that forms the soundtrack to the exhibition, along with another work owned in manuscript by Zweig and on display, the 1808 Sonata for Piano and Cello in A major. 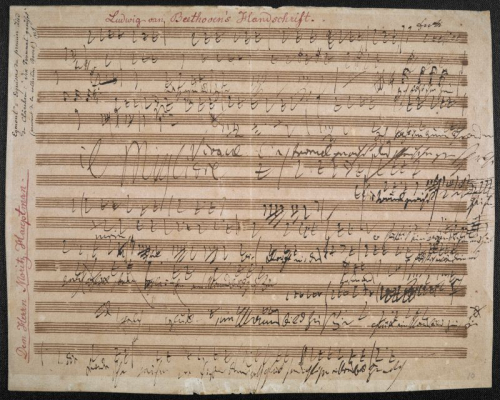 Beethoven’s initial musical ideas for the song ‘Die Trommel gerühret’ (op. 84 no. 1), sung by the character of Clärchen in his music for Goethe’s play Egmont. British Library Zweig MS 8, f.1r

The last Zweig items displayed relate to Beethoven’s death and funeral. A book of sketches by Josef Teltscher includes two studies of the composer on his deathbed. Teltscher was in attendance and his moving images of an exhausted Beethoven are no doubt more realistic that the legend that Beethoven died shaking a fist in defiance. A list of expenses for Beethoven’s funeral shows what a costly affair it was, with details of money spent to pay the priests and to provide candles and roses. It was one of the most lavish funerals ever granted to a commoner in Vienna and the streets were packed with onlookers. Access to the service was by invitation only; the invitation on display is thought to have belonged to Stefan von Breuning. Finally there is a list of donors to a fund to help Beethoven’s servants after his death, something that brings us back to the household accounts and laundry list and reminds us of the people behind them who ran Beethoven’s various households in Vienna. 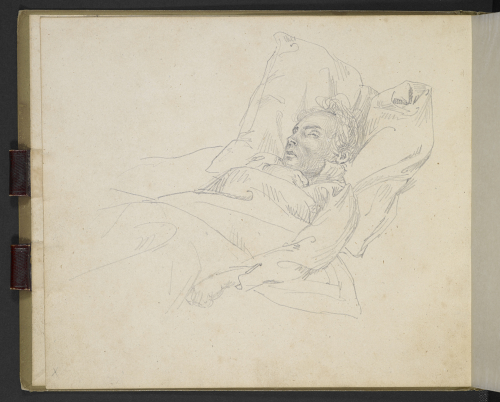 Drawing of Beethoven on his deathbed by the artist Josef Teltscher. British Library Zweig MS 207, f.1v

Some of Zweig’s contemporaries – and more recent critics – may have been cynical about the relic-hunting aspect of Zweig’s collecting, something nowhere more obvious than in his Beethoven holdings. But these items can help us to see a more rounded picture of Beethoven and his world rather than just the genius at work.