Born on Saturday 12 October 1872, ‘RVW’ remains one of the towering figures of music in Britain in the first half of the 20th century. His wide-ranging works continue to be well-loved and frequently performed in many countries around the world; and his legacy, both through the music itself and through the support he gave to future generations of musicians (and continues to give, thanks to the work of the RVW Trust) is an enduring one. 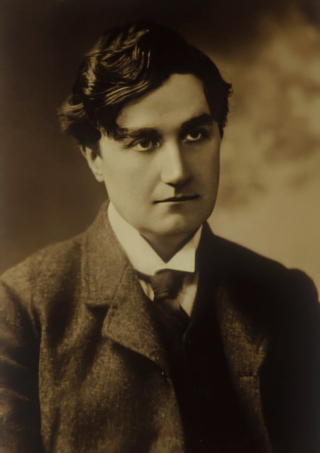 Vaughan Williams, along with Elgar and Handel, also takes a central position in the British Library’s music collections. In the years since his death in 1958 our manuscript holdings related to RVW have grown to become one of the most comprehensive for any composer represented here. Looking through our departmental files, it seems it all started in 1959 with the purchase of the autograph full score of the composer’s Fourth Symphony (Add MS 50140) – a work famously at odds with the perceived sound world of the composer’s music.

The next year saw the start of a series of generous gifts from Ursula Vaughan Williams, the composer’s widow. First was a series of letters and postcards to Vaughan Williams from Maurice Ravel (Add MS 50360). These date from between 1908, immediately following the period that Vaughan Williams spent studying in France, and 1919. The correspondence ranges from discussion of particular works (such as RVW’s song cycle, On Wenlock Edge), or particular performances (including of Ravel’s ballet, Daphnis et Chloé), through to the train times between Newcastle and King’s Cross. 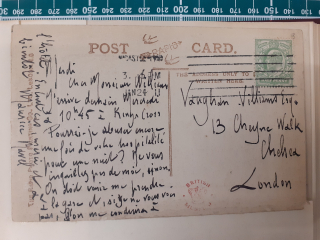 Later in 1960, following an enormous effort to bring all the material together in conjunction with Vaughan Williams’s various publishers, Ursula presented what was described by the Keeper of Manuscripts at the time as: “one of the largest collections of music of a single composer ever offered to the Museum”. Accessioned as Add MS 50361-50482, these 122 volumes include autograph scores and some sketch and draft material for most of Vaughan William’s major works, from the small scale to colossal works like his ‘Sea Symphony’. 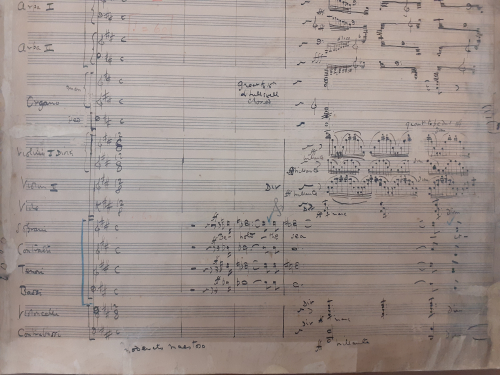 'A Sea Symphony', first performed in 1910. Part of the opening with the text: 'Behold, the sea itself!'. BL Add MS 50365A. © The Vaughan Williams Charitable Trust. Reproduced by permission.

Over the next 48 years another five collections were presented to the BL by Ursula, alongside a number of individual items. All the material is described in our online catalogue, both at the level of the volume (which may contain several items, depending how things have been grouped) and at the level of the collection as it was presented. The links below will take you to the collection level description for each of these and from there you can choose ‘Browse this Collection’ to explore the collection hierarchy in a separate window – or select ‘See Contents’ from within the catalogue description. Alternatively you can search for a particular work in the search field to see what material the BL holds. 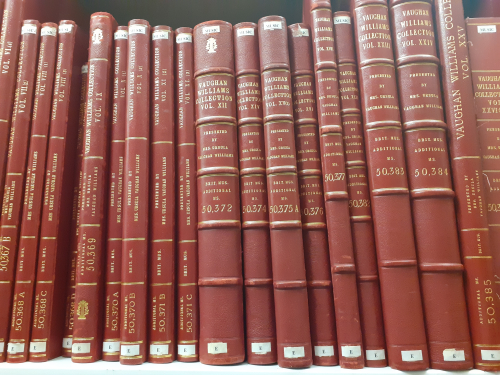 Some of the Vaughan Williams manuscripts at the British Library

Presented 1967. This collection includes Vaughan Williams’s earliest composition, written in 1878 at the age of 6. This collection also includes a series of notebooks used to write down the folk songs he heard in different parts of the country between 1903 and 1926. These are all digitised and available to view via the Vaughan Williams Memorial Library’s website, alongside the manuscript material they hold and details of the songs and tunes written down.

Presented in 1971. This collection includes a number of smaller and occasional pieces as well as a volume of his compositions from his time as a student at the Royal College of Music and some miscellaneous sketchbooks.

Presented in 1994. This collection includes a number of unpublished works, such as the music for the masque ‘Pan’s Anniversary’, with music by Vaughan Williams and also arrangements of 16th century dances by his good friend, the composer Gustav Holst.

Presented 1995. Vaughan Williams’s orchestral arrangement of the song cycle ‘On Wenlock Edge’ appears in this collection (MS Mus. 153), as well as a wider range of types of material, such as correspondence, awards, certificates, copyist manuscripts and annotated proofs. It also includes the so-called ‘Seatoller’ log book – a record of a reading holiday in Cumbria that RVW took around Easter 1895 with some of his fellow Cambridge students, including George Trevelyan (later a famous historian), Maurice Amos and Ralph Wedgwood. The volume includes contributions from all of them, in them of stories, jokes, drawings and more. 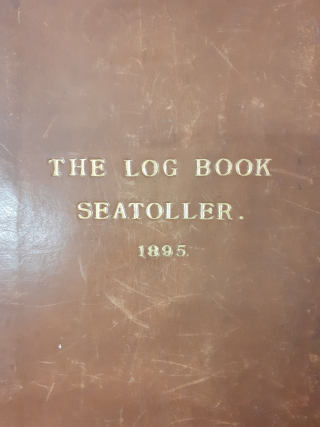 Bequeathed by Ursula Vaughan Williams, this material arrived at the British Library in 2008. The majority of the collection is made up of letters, but it also contains a large number of photographs and other papers, related to Vaughan Williams’s family history for example. It also contains items shedding more light on Ursula’s life too, both in her tireless work to continue Ralph's legacy, but also in her own work as a poet too.

A large selection of RVW’s letters were included in Hugh Cobbe’s 2008 collection, published by OUP, and they have since been joined by many, many more in the online Vaughan Williams Letters database. This freely accessible database is both endlessly fascinating and incredibly useful - with all of the letters conveniently transcribed for those of us who would otherwise struggle to read the composer’s notorious handwriting.

This tuning fork, which is said to have belonged to Beethoven and then given by him to the violinist George Bridgetower, featured in our Beethoven exhibition last year (there is a bit more about it here). Less well-known is that, having been in Bridgetower’s family for a number of years, then passed to several other musicians, it then apparently ended up with the composer Gustav Holst in 1921. In turn, Holst gave it to Vaughan Williams, and then Ursula presented it to the British Library in 1992.

Material from other sources

The larger collections listed above are just one aspect to the variety of materials here at the British Library. Other items have entered the collections by other routes and from other owners. These include things like the autograph manuscript of the ‘London’ symphony, presented by Sir Adrian Boult in 1963 (Add MS 51317). Or, more recently, the draft vocal score for the ‘Pilgrim’s Progress’, which was among the material donated by Joyce Kennedy in memory of her husband, Michael Kennedy (MS Mus. 1752/1/5). We are still acquiring Vaughan Williams material as well: earlier this year, a poem written by Vaughan Williams in the early 1950s to Eva Hornstein was generously donated by the dedicatee (MS Mus. 1870). And watch this space for another RVW acquisition announcement a bit later this year… 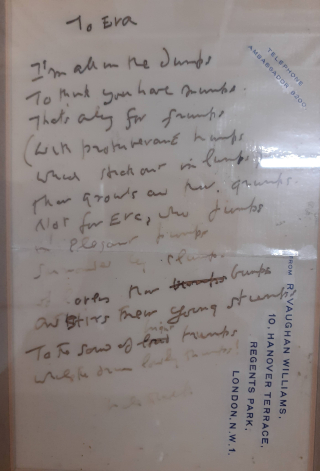 The only known manuscript for what must be Vaughan Williams’s most famous work, The Lark Ascending, is another item in this category (Add MS 52385). This was donated in 1964 together with some letters of the violinist Marie Hall, who gave the first performance of the work (the letters are from earlier in her career however). The manuscript is actually primarily a copy, and in the version for violin and piano, however there are many alterations and pasted over corrections in Vaughan Williams’s hand too, showing the often extremely detailed changes he continued to make to the piece. 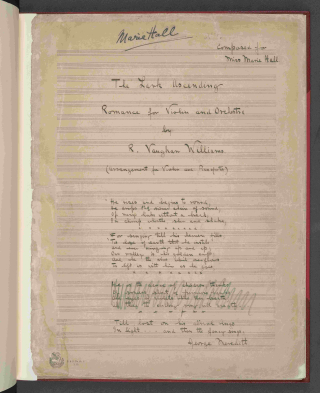 Title page, mostly in RVW's handwriting, for a manuscript copy of 'The Lark Ascending', in the version for violin and piano. Mostly in a copyist's hand, but with autograph annotations and corrections. BL Add MS 52385. © Oxford University Press.

It would be difficult to describe the Vaughan Williams materials here at the British Library as an archive as such, having been collected together from many different sources over a long period of time. But the end result is certainly archival in character, in its wide-ranging types of content and in the rich detail those items can provide about the life and work of a composer. And of course, this blog post has only focused on the manuscript materials here at the British Library: that material is further enriched by study of it alongside published sources, recordings and broadcasts.

What's more, neither Ralph Vaughan Williams nor the collection of material relating to him exist in isolation: as part of the wider British Library music collections the context in which he lived and worked is also represented - be it other composers, performers or musical institutions. While it would be impossible to collect on the same scale for every musician and composer, we nevertheless attempt to capture a representative cross section of music making at different times; to attempt to capture a sense of the breadth of what was going on.

On Monday 14 November we are holding a Study Day at the British Library Foyle Visitor and Learning Centre to celebrate his anniversary further. More information and details on how to book a place can be found on our What's on pages. There will also be a small display of his manuscripts in our Treasures of the British Library gallery in December (until then, you will be able to see the autograph manuscript of the Pastoral symphony in the main music display case, alongside Beethoven's tuning fork which he also owned).

Vaughan Williams (2nd from the right), in the company of Handel, J.S. Bach and Virginia Woolf - at the entrance to the Rare Books & Music Reading Room at the British Library