Nino Rota’s I due timidi - an opera for radio transmission

On 15 November 1950 the RAI (Radio Televisione Italiana) Third Programme broadcast I due timidi, an ‘opera radiofonica’ composed by Nino Rota to a libretto by Suso Cecchi d’Amico, for the first time. It had been commissioned by the Italian public broadcasting company, which aimed to create an original repertoire exclusively intended for radio. It was the beginning of a remarkable journey: over two decades the opera would be performed across different media, languages and cultures, ranging, with appropriate adjustments, from the darkness of radio to the limelight of the stage and television, constantly reshaping to adapt to new contexts, while keeping its own poetic, aesthetic, dramatic, and musical substance. This is indeed a fascinating story, with a relevant chapter unfolding in Britain during the 1950s, which documents preserved in the British Library allow us to reconstruct.

Nino Rota (1911-79) and Suso Cecchi d’Amico (1914– 2010) were invited to create a new opera for broadcasting in late 1949. They had been close friends since their youth, sharing from different sides the exciting adventure of Italian post-war cinema. Rota, a talented pupil of Ildebrando Pizzetti and Alfredo Casella, was successfully making his way as a composer of both classical and applied music, and was already known in England as the author of the score for films such as The Glass Mountain. Cecchi d’Amico, the daughter of eminent scholar Emilio Cecchi and painter Leonetta Pieraccini and the wife of the distinguished music critic Fedele d’Amico, was successfully making her way as a screenwriter, the co-author of the script for Vittorio De Sica’s film The Bicycle Thief.

Working together in perfect harmony, in a few months they conceived and created an original story that takes place over a single day in a lower middle-class apartment block in an unnamed city – a recurring setting in Italian movies at the time. A young man, Raimondo, and a young woman pianist, Mariuccia, who are in love with each other from a distance but have never met, have settled close to each other, hoping to be able one day to declare their mutual love. Raimondo lives in a boarding house held by a mature landlady, while Mariuccia resides in a modest flat with her mother, gracefully practising the piano to Raimondo’s delight. However, fate has different plans for them. An accident and a subsequent misunderstanding cause each of them to declare their love to the wrong person, which turns out to be fatal: both Raimondo and Mariuccia are too shy to express their true feelings in order to put right the difficult situation. In an elliptical, bittersweet finale, set two years later, we hear an exhausted pianist practising at night-time – it is Mariuccia, now the wife of an elderly doctor, mother of two kids - and an angry male voice: Raimondo, now the landlady’s husband and the landlord of the boarding house, who is manifestly annoyed by that disturbing noise. 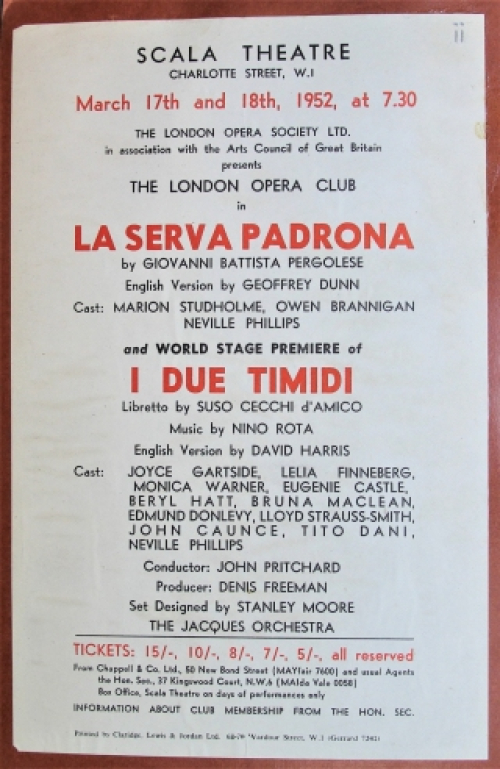 Flyer for the world stage premiere of I due timidi. BL MS Mus. 1743

I due timidi in the UK

I due timidi received a special mention at the Prix Italia 1950, where its immediate expressiveness and the fresh quality of its soundscape were greatly appreciated, including by delegates from the BBC. Within a few months the BBC Third Programme broadcast the Italian production of the opera and the operatic department at the BBC produced an English version, first aired on 5 March 1952, again on the Third Programme, under the title The two shy people. A few days later, on 17 March 1952, the opera received its world stage premiere at the Scala Theatre in London, a production of The London Opera Club in association with the Arts Council of Great Britain. 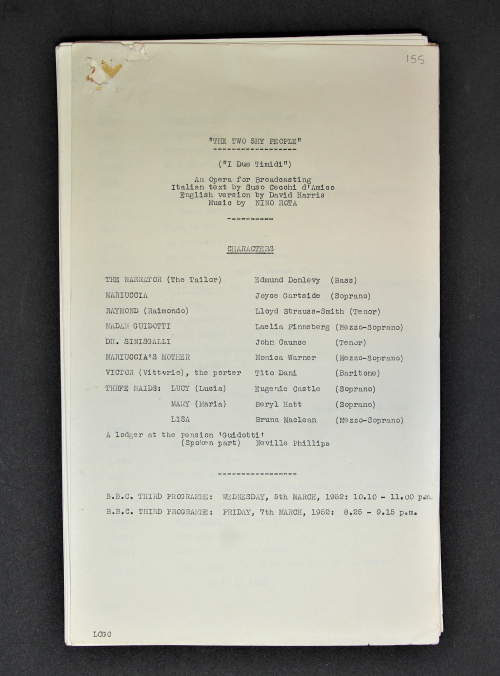 The intense British life of I due timidi during the 1950s is retraceable in detail from documents kept in a folder preserved at the British Library (MS Mus. 1743) presumably collected by David Harris, the BBC Opera Manager who was the producer of the opera’s BBC broadcast and the author of the English version of its libretto. The folder is rich in press cuttings related to the 1952 radio performance and to a new production, also curated by Harris and broadcast on the BBC Home Service on 1 April 1957, whose typewritten opening and closing announcements are preserved. The folder additionally contains a considerable number of reviews of the stage premiere, but no press cuttings referring to the BBC production of the opera for television, which adopted the English version by Harris and was first broadcast after his death, on 30 March 1961. 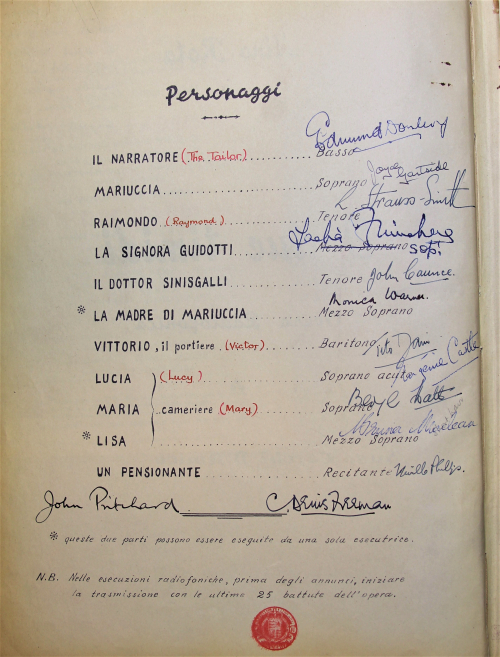 Signed vocal score of I due timidi

The core of the folder lies in the musical material. The vocal score of the opera, a diazotype copy of a non-authorial manuscript of the original version signed by Harris on the cover and by the whole cast of the 1952 production inside, has Rota’s autograph dedication to Harris inscribed on the front page. The playbill flyer of the stage premiere is pasted on the inside cover.

The score clearly testifies to the work undertaken to make the opera more intelligible to a British audience. The English translation is added in red ink in exact alignment with the Italian text and carefully notes slight alterations to the original version, such as the addition of a 25-bar prologue before the original opening (using the same music as the closing 25 bars of the opera) followed by a brief spoken description of the scene. 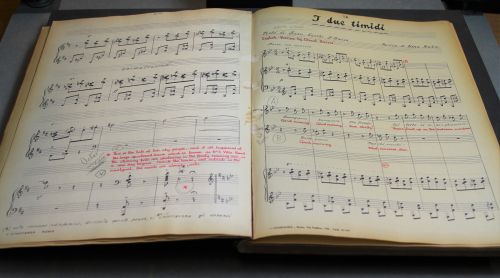 Vocal score of I due timidi showing English additions in red

The documents as a whole prove to be an invaluable source to allow a close examination of the opera in its multiple versions and to integrate with the precious autograph material relating to the opera preserved in the Fondo Nino Rota at the Fondazione Cini, Venice.

I due timidi received its Italian stage premiere on 19 January 1971 at the Teatro Petruzzelli in Bari – a city in the South, where Rota was the director of the local Music Conservatory for almost 30 years. From that moment on, it was gradually included in the opera repertoire. Seventy years after the world stage premiere, the opera returns to the London stage, presented by the Guildhall School’s Opera Department at the Silk Theatre. We would like to imagine that Nino Rota, who had a special affection for London and was happy to have some of his operas staged by students in academic institutions, would be delighted to be together with his dearest friend Suso Cecchi d’Amico in the audience.