The Susan Bradshaw Papers: Archive of an Insightful Communicator

The archive of Susan Bradshaw (1931-2005) is now catalogued and available for consultation in the Library’s Rare Books and Music Reading Room. Proceeds from the British Library's purchase of the archive went towards the Royal Philharmonic Society's establishment of the Susan Bradshaw Composers’ Fund, as arranged by Brian Elias, composer and Bradshaw's close friend. 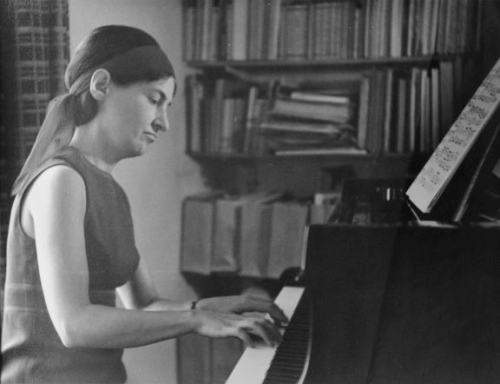 Susan Bradshaw pianist, teacher and writer on music, was born in Monmouth on 8 September 1931. After spending time in India and Egypt during her childhood, where her father’s work in the army had taken their family, Bradshaw embarked on learning piano and violin. She later studied at the Royal Academy of Music with Harold Craxton (piano) and Howard Ferguson (composition). Then, in 1957, Bradshaw seized the chance to expand her musical world, taking up a French Government Scholarship to study composition with modernist figurehead, Pierre Boulez, and Max Deutsch in Paris. That year in France proved a catalyst for melding musical partnerships and alliances. Bradshaw formed a piano duo with her close friend Richard Rodney Bennett, and the Mabillon Trio with Philip Jones (oboe) and William Bennett (flute). However, the year in France signalled the decline of her activity as a composer, and on her return to the UK, Bradshaw moved her energy to accompaniment and performance.

Bradshaw was an ardent advocate of new music. She helped contemporary composers by including them in ensemble programming, promoting new works with first performances and using broadcasts to share what she recognised as important and progressive about such music. Concert ephemera, cuttings from radio show advertisements and draft programme scripts in her papers record her efforts and enthusiasm. 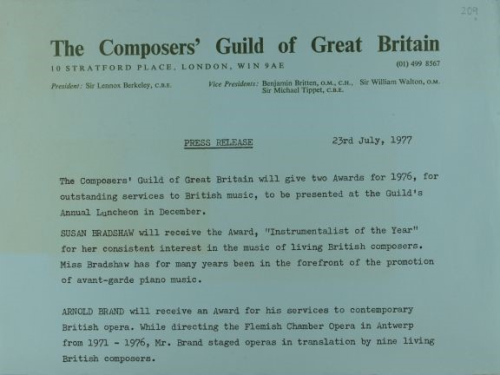 The Composers’ Guild of Great Britain presented Susan Bradshaw with a special award of Instrumentalist of the Year, for her services to the music of living British composers. (BL MS Mus. 1755/4/4, f. 209)

Bradshaw’s archive reflects the breadth of her own musical experience and contains:

Related Resources at the British Library

Many items in the British Library Sound Archive complement and enhance the vibrant resource of Bradshaw’s paper archive. Examples include:

Translating the ‘Shapes and Sounds’ of Composers’ Imaginings [1]

Bradshaw was well-positioned to act as a mediator between composers and audiences. She had a deep understanding of musical composition, performance and analysis, and used her knowledge of all three to interpret the works she encountered and to bring composers’ imaginings to life. Bradshaw believed that these three strands of musical endeavour were inter-related, and mutually nourishing. She appreciated that each was essential for advanced musical understanding, and furthermore, that the true product of this understanding was the communication of meaning. Whether that communication was musical (in performance), linguistic (for example, in academic writing), or pedagogical, Bradshaw saw the need to balance emotional experience with enquiry:

Passionate involvement precedes – must precede – cool appraisal; but when narcissistic pleasure starts to cancel out enquiry, when the sense of striving to understand and to reveal ceases to be the outcome of delight, when wonder becomes complacency, then great art becomes commonplace in the mind of the beholder and creation and recreation lapse into mere repetition. [2]

Bradshaw’s influence on the musical world can be seen in the archive. To trace it, one might begin with her scrapbook programmes (signalling, for example, her involvement with the Darmstadt International Summer Courses) and move to the exchange of ideas with fellow musicians in her correspondence, before visiting the vividly-expressed opinions in her writings.

The catastrophic destruction brought about by two world wars permeated all aspects of social existence; many composers felt that the old musical systems were inadequate for the development of the art. In a parallel to the destruction of societal structures through war, it was as if the hierarchies of the diatonic tonal system had to be broken down also. Composers looked to expand the resources available to them – the boundaries between music and noise blurred, and the number of notes in the conventional system increased with experiments in microtonality.

As musical modernism turned from the tradition of western diatonic tonality, it wrenched audiences from their familiar sound worlds. To the modernist composers, the rules and patterns of diatonic harmony represented predictability and constraint. Bradshaw’s broadcasting demonstrates her use of radio as a medium to promote modern music but also to challenge audiences to question the nature of listening: Why do we listen to music? What function does it have in our lives? She strove to help listeners navigate contemporary music, pointing out features and techniques, and highlighting composers’ search for truth in music.

As an individual whose influence and reach in the contemporary classical music scene was extensive, and well-evidenced in her archive, it is fitting for her papers to sit alongside those of many composers and musicians who so appreciated her support, here at the British Library.