Michael Tippett: love in the age of extremes

Danyel Gilgan, author of The Life Before: My Grandfather's Life Uncovered, writes about the artistic and personal relationship of Wilf Franks and Michael Tippett. 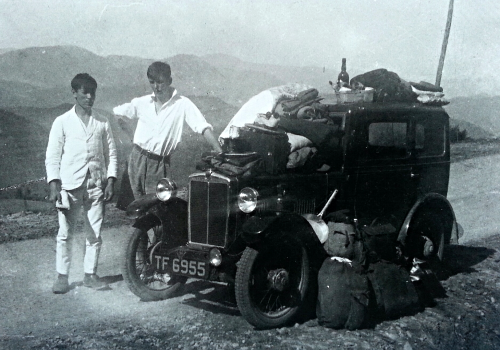 Wilf Franks and Michael Tippett in Spain in 1933. Photo by David Ayerst. Reproduced with permission.

Having spent much of the last seven years researching the life of my late grandfather, the artist Wilf Franks, I discovered many musical links to his life. My new book The Life Before: My Grandfather's Life Uncovered explores his connections to figures such as Ralph Vaughan Williams and Sir John Eliot Gardiner. But it was the writings of another giant of 20th-century music which brought me to the Rare Books and Music Reading Room at the British Library. The figure in question is Sir Michael Tippett, and the Library’s collection of Tippett letters and musical scores provided an extraordinary reservoir of information about the youthful life of my grandfather.

Throughout much of the 1930s, the lives of Wilf Franks and Michael Tippett were intertwined, as together they staged musical and dramatic productions in diverse locations such as Battersea Town Hall and the East Cleveland mining village of Boosbeck in the North East of England. During these years of youthful experimentation, the two young men became involved in an intense and volatile love affair as they explored theories of pacifism and embraced the radical Marxist politics of Leon Trotsky. At this time they also shared a passion for traditional British folk music and the poetry of luminaries such as William Blake and Wilfred Owen.

In one letter Tippett makes a powerful statement about Wilf Franks’ poetic influence on their relationship.

'… he spends an hour or so with me here on the Blake I am going to set, and with a surer instinct for poetry than mine tells me where to get off – in point of fact I am therefore only setting the ‘Song of Liberty’ from The Marriage [of Heaven and Hell]… Wilfred Owen he knows almost word for word and draws it out for me, its meanings, its divine pity and so on – that will stay as long as it means something to us both …[1]'

As well as this connection to Tippett’s setting of William Blake’s ‘A Song of Liberty’, the relationship is poetically linked to another of Tippett’s compositions. In 1935, Tippett completed his String Quartet no.1, a piece that is now considered the first official composition in his canon of works. He wrote the following of the piece:

'Meeting with Wilf was the deepest, most shattering experience of falling in love: and I am quite certain that it was a major factor underlying the discovery of my own individual musical ‘voice’… all that love flowed out in the slow movement of my First String Quartet…[2]'

The original manuscript of String Quartet no.1 is held in the Tippett collection at the British Library (Add MS 59808). On the first page of the document is the simple inscription, ‘To Wilfred Franks Quartet no I in A by Michael Tippett’.  Opposite this dedication, Tippett wrote out the Wilfred Owen poem ‘Happiness’:

Ever again to breathe pure happiness,

The happiness our mother gave us, boys?

So smile at nothings, needing no caress?

Have we not laughed too often since with joys?

Have we not wrought too sick & sorrowful wrongs

For their hands’ pardoning? The sun may cleanse,

And gods will show us pleasures more than men’s.

But the old Happiness is unreturning.

Boy’s griefs are not so grievous as youth’s yearning,

Boys have no sadness sadder than our hope.

We who have seen the gods’ kaleidoscope,

And played with human passions for our toys,

We knew men suffer chiefly by their joys. 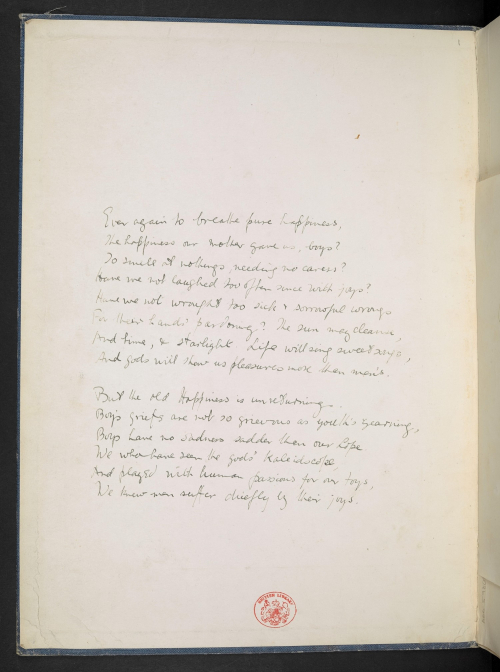 Wilfred Owen’s poem ‘Happiness’. Written here by Michael Tippett on the inside cover of the manuscript of his String Quartet No.1, the composition that is dedicated to Wilf Franks. Add MS 59808. ©The Sir Michael Tippett Will Trust. Reproduced with permission.

The optimistic opening is in contrast to the darker second verse. Owen seems to be contrasting his happy youth to the hell of war, but the poem appears here as a poignant prediction of how the joy of Wilf and Tippett’s early relationship would end in sadness and disarray. Perhaps, even at this mid-point in the relationship, Tippett already knew the love affair would have a painful end.

Politics, too, played an important role in Wilf and Tippett’s relationship. From the early days of the affair both men had a passion for radical Marxist politics. By the mid-1930s they had embraced Leon Trotsky’s political thinking and were starting to involve themselves with London’s emerging Trotskyist movement. At this time Fascism was raising its ugly head across Britain, and Oswald Mosley’s British Union of Fascists (BUF) was preaching hateful, anti-Semitic rhetoric on the streets of London. On Sunday 4 October 1936, Mosley planned to march his men along Cable Street in East London, right through the heart of the local Jewish Community. Thousands of left-wing anti-fascist protesters came to support the local Jewish community’s effort to block the fascist parade. Amongst the crowd were Wilf Franks and the composer Alan Bush. Appeals by the Jewish community to have the march banned fell on deaf ears and the Metropolitan Police were tasked with clearing a path for the fascists. As mounted police began baton charging the crowd, Wilf stood on a soap box shouting ‘Stand firm comrades, stand firm!’ He was grabbed from the crowd by the police and charged with assaulting a police officer, a charge which he always denied. As Wilf sat in a police cell with other arrested men, he would have heard the news that Mosley and the BUF were forced to turn away from the Jewish neighbourhood and march instead towards the west. It was a famous victory against British fascism. Three days later Tippett wrote to Alan Bush:

'Yes, Sunday was historic! Wilf is on remand for criminal assault – police perjury - & the family fortune has fallen heavily over a counsel for him. Thames Police Court Friday morning! So it goes. Love Michael.' 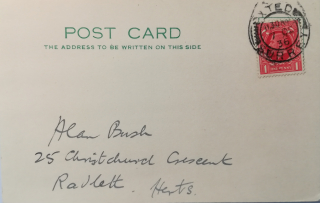 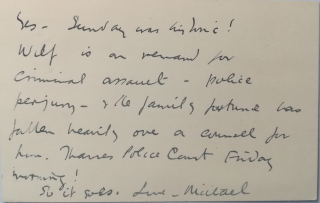 © The Sir Michael Tippett Will Trust. Reproduced with permission.

Tippett’s attempts to get Wilf freed failed when he was sentenced to 28 days hard labour. The composer spent more of his meagre financial resources on a failed appeal against the sentence, as a second letter to Alan Bush shows:

'My dear Alan, I was glad to hear from Wilf by phone that you were in touch with him… I have compromised myself so to speak for the whole amount & shall pay the remainder…[3]'

The love relationship between the two young men came to an end in August, 1938, when Wilf Franks told Tippett of his intention to marry. The news came as a bitter blow to the composer, ‘It was as if a whole dam had opened’[4] he wrote. Tippett was plunged into a personal crisis, and he sought healing in Jungian psychoanalysis. Despite the painful split, Wilf Franks and his new love Meg Masters continued to work with Tippett on creative events such as a 1939 Symphony of Youth in Brockwell Park, South London. At this time Tippett was working on the libretto for a new oratorio. The poetry of Owen and Blake, the anti-fascist, anti-imperialist politics which Franks and Tippett had embraced and the Jungian analysis in which Tippett sought healing, would all find their way into the libretto of the oratorio which became Tippett’s most famous work, A Child of Our Time.

By the time A Child of Our Time premiered in 1944, Wilf Franks and Michael Tippett were fully estranged. It would be some 40 years until the friendship was rekindled. A recently discovered letter sent from Tippett to Franks gives an interesting insight into the composer's feelings towards his old friend at the time of the reunion.[5] The composer wrote, 'As you have my phone no. now, will you keep it close to your heart', Tippett then adds, with a nod to the painful past and with a touch of humour, 'or even throw it once more into the dustbin'. He signs the letter 'Love Mike', the affectionate name that Wilf had always used. Although living at opposite ends of the country, the two men, who both lived into their 90s, remained friends for the rest of their lives.

[5] The recently discovered letter from Michael Tippett to Wilfred Franks is held in the Franks family collection and is quoted here with permission from The Sir Michael Tippett Will Trust.