The Qatar Digital Library (QDL) is a collaboration between the British Library and the Qatar National Library, in which historical records from the former India Office are being catalogued and digitised, along with Arabic manuscripts on scientific topics from the British Library’s collection. Music theory has always been considered a scientific pursuit by Arabic scholars – as it had been by Plato and Pythagoras – on account of the mathematical nature of topics such as intervals, modes, rhythm, transposition, and tonal relationships.

Musical manuscripts digitised for the QDL so far include a copy of a commentary on an influential theoretical treatise, the Book of Cycles (Kitāb al-adwār) by Ṣafī al-Dīn al-Urmawī (d. 1294) (Add MS 7471, ff. 41v-92r), a work on the construction of musical instruments (Or. 9649), a cosmological treatise on music (Add MS 23494), and a recently-catalogued copy of the Kitāb al-inʻām bi-maʻrifat al-anghām (Book of Generosity on the Understanding of Melodies; Or. 13019) by the 16th-century music theorist Shams al-Dīn al-Ṣaydāwī. [Note that although this manuscript has been digitised it is not yet available to view on the Qatar Digital Library.]

The Kitāb al-inʻām is a short text in verse, remarkable for its presentation of an innovative and apparently unique system of music notation. It is also a feast for the eyes: both its text and its many diagrams are copied using a range of brightly-coloured inks which are not merely decorative, but rather an inherent aspect of this notation system. While several other copies of this text are known, the QDL’s high resolution, full-colour digitisation is a first, allowing its fundamental aesthetic and graphic features to be appreciated on an accessible digital platform for the first time. 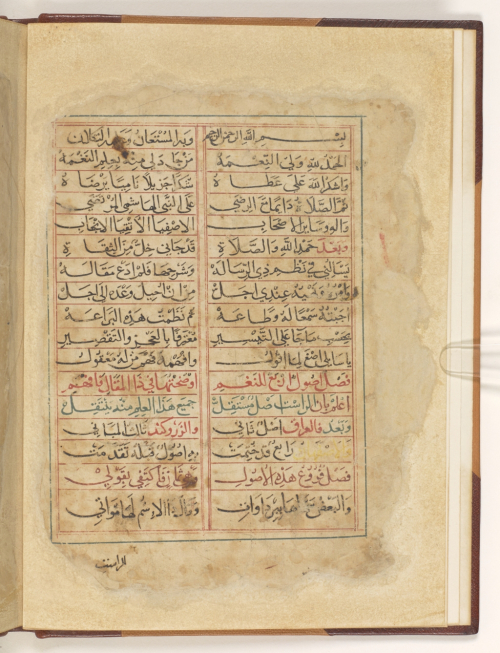 Little is known about the author, although his name indicates origins in Ṣaydā (Sidon) in today’s Lebanon. His dates are uncertain, but he may have died in Damascus in 1506, which would mean that Or. 13019 – dated to 906 in the Islamic hijrī calendar (equivalent to 1501 CE) – was produced within his lifetime, as well as being the earliest known surviving copy. Ownership marks recorded on folio 1r indicate predominantly Syrian owners over the centuries. It was bought by the British Museum in 1966.

Following an introduction [fig. 1], al-Ṣaydāwī opens the treatise by outlining the four fundamental musical modes (called ‘uṣūl’) used in his time: Rāst, ʻIrāq, Zīrāfkand and Iṣfahān. Modes are constructed of sets of tetrachords which may be present within more than one of them, establishing complex familial relationships between them. From each of these four basic modes, two further ‘branch’ modes (furūʻ) are derived, which maintain a musical relationship with their ‘parents’. In addition to these groups of four and eight, al-Ṣaydāwī also enumerates six secondary modes called awāzāt, each of which is likewise related to two of the twelve fundamental and branch modes already outlined. 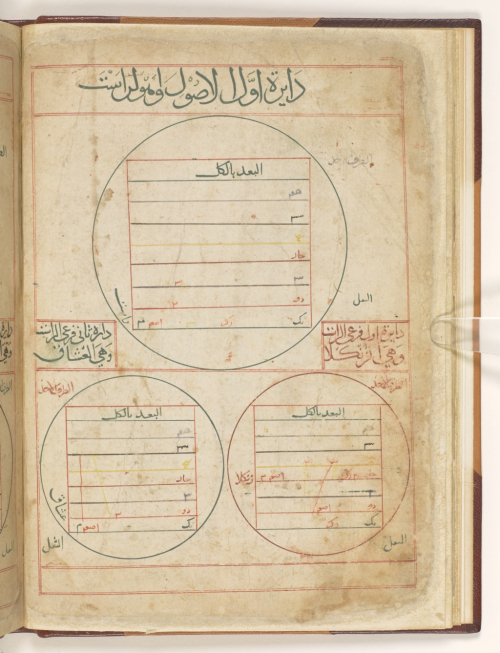 Figure 2: Or 13019, f. 9v, depicting the fundamental mode Rāst, and its branch modes Zankulā and `Ushshāq

To present these modes and describe further aspects of their performance, al-Ṣaydāwī uses a stave-like diagram [fig. 2] of eight labelled parallel horizontal lines enclosed within a circular frame, representing the degrees of the scale (buḥūr). The lowest pitch is indicated on the bottom line, and the highest (an octave above) on the second-highest line (the uppermost line in each diagram is a framing device and not indicative of a note).

Al-Ṣaydāwī follows established convention in using Persian terms to describe these notes as yekgāh (first position), dūgāh (second position), etc. However, he innovates in additionally colour-coding each line, with the eighth line from the bottom the same colour as the lowest, as the notes represented are an octave apart (the uppermost line in the diagrams is only a frame). The specific colours are described in the introduction to the text [fig. 3].

Al-Ṣaydāwī goes on to outline a system for representing notes above and below the basic octave, independently of this graphic stave. To do this, a table [fig. 4] presents colour-coded Arabic alphanumeric abjad letters indicating microtonal intervals. These notes are paired with a ‘question’ and ‘response’ concept indicating further notes, at fixed intervals of separation totalling an octave, and allowing the total range of notation to be expanded. 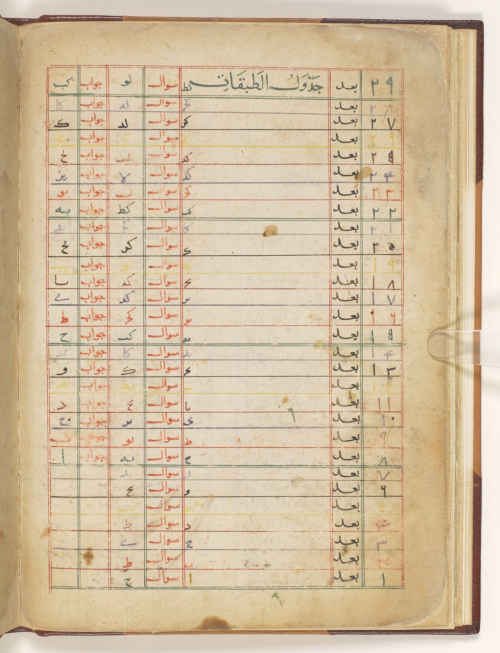 The second unique aspect of al-Ṣaydāwī’s work is a notational system applied to the stave diagram which, in combination with instructions in the text, indicates aspects of the performance of the mode [fig. 5]. The letter mīm (م), standing for ma’khadh (مأخذ, meaning ‘place from which one takes something’) is written on the starting note/line of the mode and in the same colour, on the left of the diagram. The mode’s final note – often also its tonal centre – is indicated with the word rakz (with the sense of ‘setting, fixing’), written on the corresponding line, to the right. 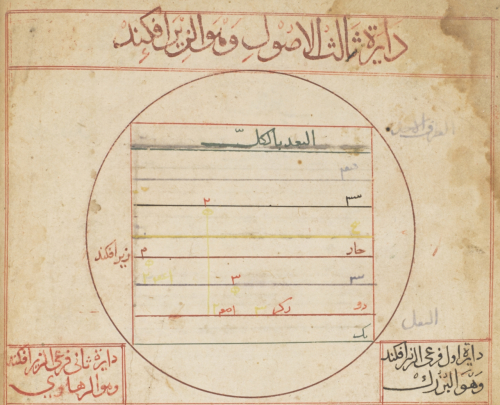 The instruction iṣʻad (اصعد, ‘ascend’) in red, denotes a transition to a higher pitch. Conversely, a yellow letter hāʼ (ھ, from the root هبط, ‘descent’) indicates a transition to a lower pitch. These ascents or descents must be performed note-by-note (bi-al-tartīb) if the letter ‘tā’’ (ت, in red) is written next to the note towards which the pitch ascends or descends, whereas the player should jump directly to that pitch if iṣʻad or hāʼ is written with a long ‘tail’. Other abbreviations indicate additional aspects of performance such as prolongation, staccato articulation, and trill-like ornamentation.

This work presents difficulties of interpretation due to the poetic text and some ambiguity in terminology. For example, yekgāh, meaning the first note of the scale, also indicates the particular mode which starts on that note, i.e. rāst, while buḥūr also has variant meanings. Similarly, while the word maqām these days means ‘mode’ in general, in al-Ṣaydāwī’s time it still retained a more literal meaning of ‘placement’. Furthermore, the meaning of some of the notational abbreviations is unclear; some of the diagrams in the extant copies appear unlabelled and unfinished; and Or. 13019 lacks at least one folio (between the present folios 11v and 12r).

Al-Ṣaydāwī’s musical notation remains a fascinating and enigmatic theoretical experiment, unique of its time. While it permitted a wide range of notes to be succinctly conveyed, their relationships to each other expressed, and an unprecedented level of codified performance detail to be indicated, no later texts are known to have developed this system further.

Passionate music from a hot country: a musical visit to Iraq-Kurdistan

The British Library's World and Traditional Music section supported ethnomusicologist, Rolf Killius, on a field trip to record music in Iraq-Kurdistan over June/July 2016. This is his report. 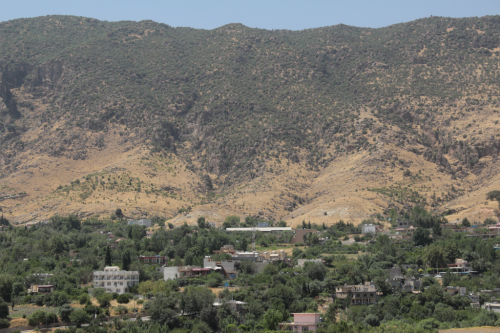 It is hot. No, it is extremely hot. Today the temperature is 45° Celsius; the air is bone-dry, no trace of wind. I am in Sulaimani, the second urban centre in Iraq-Kurdistan. This part of Iraq belongs to the Kurds and is de-facto an independent state run by a Kurdish government.

Traditional singers and musicians have gathered in the Zardosht Café. Zardosht is the Kurdish term for Zoroastrianism, an age-old religion known in the wider region. Since the coming of the Islamic period, it has become a minority religion, often frowned upon. These days the Zardosht belief is making a kind of come-back. Here in Kurdistan the faith is essentially Kurdish and promotes traditional folk music.

The group starts to play: The zarab (goblet drum) player provides rhythm while the Korg keyboardist adds harmonies and melodic phrases. Occasionally the saz (plucked lute) virtuoso contributes drone and melodic sounds. But the musical highlight is the charismatic lead-singer Ata Azizy; he alternates – or even competes – with the balaban player, Jowanro, in expressing intricate melodic lines. A balaban is a traditional single-reed wood instrument; it is very similar to the Armenian duduk. Its sound is soothing and exciting at the same time. Their way of singing and playing, including the guttural stops, is possibly what makes the music “typically” Kurdish. 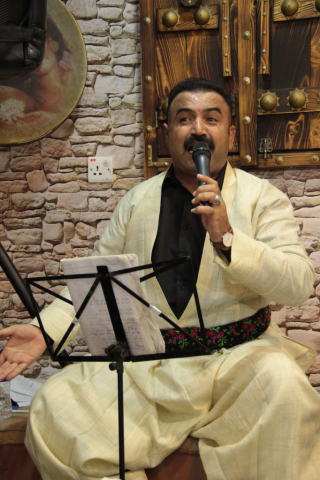 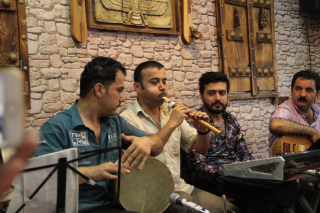 With the support of the British Library's World and Traditional Music section, I was able to visit Iraq-Kurdistan and record traditional music during live events and in pre-arranged recording sessions. I was curious: how does a new country treats its rich traditional music culture?

I stay for the ‘after-party’ at the Zorgasth Café. Here the singer, Rafat Germiany, and the same balaban player perform howrama. Though this musical genre is remotely connected to Zoroastrianism, it is known as a typical Kurdish vocal style. The voice and the wind-instrument alternate again. 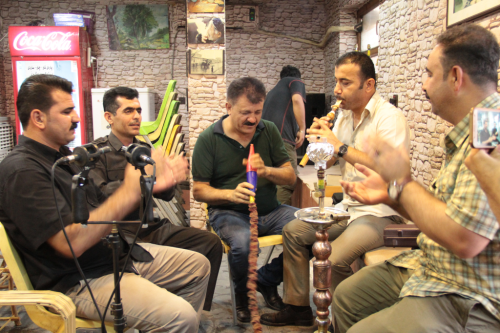 For me the most remarkable thing is the large, mainly young crowd (only men). They watch the performance with increasing anticipation. It shows that the music is still meaningful to a younger audience and therefore has a future. One participant told me that this café was the only public space where a female singer was allowed to perform these days.

Everybody mentions the traditional vocal style called heiran from the Erbil region, Erbil being the country’s capital and the other urban centre. Mr Delzar, a friend, invites me to his home village far from Erbil, just below the Qarachokh mountain range. Today his ‘village’ consists of several farm-houses managed on a part-time basis and re-created only recently. The original Kurdish villages of this region were destroyed by Iraqi troops, the last time by Saddam Hussain in 1988. Only in the last few years – the region was only recently secured by the Peshmerga (Kurdish liberation army) – have some of the original villagers and their descendants come back to farm again.

A seasoned Kurd arrives at Mr Delzar’s farm-house and immediately starts singing. Mr Mahyadin Sherwani is a farmer and self-taught heiran singer. He explains to me that the songs of the heiran genre describe the rugged countryside of Kurdistan and its people.

I first experienced traditional Kurdish vocal music many years back in the Kurdish region of eastern Turkey. I listened to the always slightly over-amplified and highly reverberated recordings from cassettes played on the crackling PA-system of a local bus. There, listening to this music and viewing the hills flying past, I imagined how this music was born in the Kurdish countryside.  I have the same feeling today, listening to this talented singer in this Iraq-Kurdistan village. 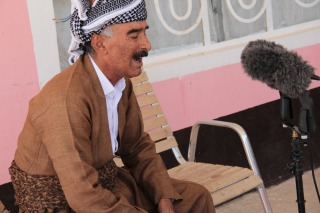 I have already mentioned the saz. During my last week in Iraq-Kurdistan I was invited to a performance in the heart of Erbil of the saz player and musical instrument shop owner, Bakr Sazvan. He has his shop just below the ancient citadel set on a mound towering over the city. He played a number of electrifying pieces, setting his business aside for a full hour.

The saz is a pear-shaped plucked instrument, with five or six strings organised in three courses. For the Kurds the saz is an essentially Kurdish instrument though it is also used by Turkish and Iranian musicians.

Especially intriguing is how Bakr Sazvan plays, combining melodic phrases played on the higher pitched strings, and striking the lower pitched strings in order to create the accompanying drone sound. 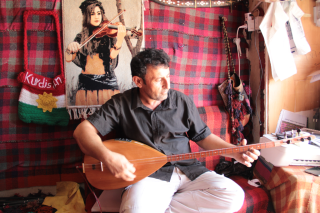 Listen The Saz player Bakr Savan in his workshop

As I pack my bags for the return journey to London I ponder about Kurdish traditional music: in comparison with many other regions of the world I’ve visited, the music of the Kurds is still alive and kicking! As these people are very keen to demonstrate traditional music and to preserve their culture, they invited me to come again for a much longer stay. I happily accepted.

(with thanks to the musicians, interpreters, fixers and friends who assisted on the trip)

The recordings made during this project will be added to the Rolf Killius Collection (C815). Some of Rolf's recordings from rural India are online on BL Sounds.