The Mozarts in London 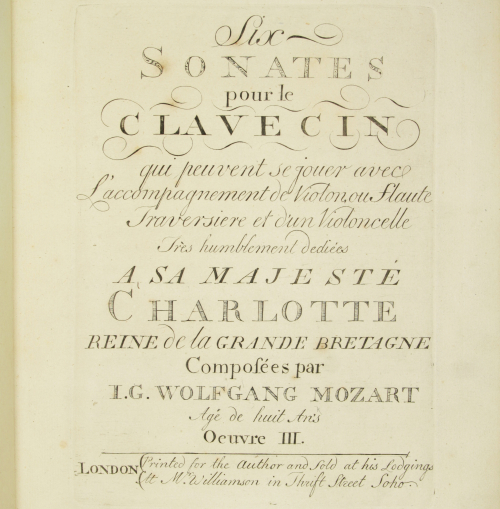 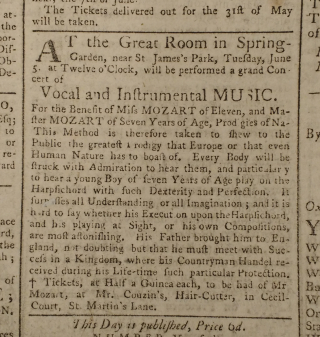 Youth's Delight on the Flagelet: Samuel Pepys and his lessons with Thomas Greeting

Nearly 350 years ago, the English diarist Samuel Pepys wrote in his entry for Thursday 28th February 1667 that he had employed a man named Thomas Greeting to teach the flageolet to his wife.  According to the entry, this was something of an impulsive arrangement: Greeting had gone with the flageolet-maker Drumbleby to deliver a new instrument to the diarist, who appears to have leaped upon the opportunity to arrange instruction for Mrs. Pepys.

Pepys’s musical enthusiasms feature prominently in the diary, particularly his passion for playing the flageolet and recorder.  He seems to have been well-connected within the world of professional musicians, so this association with Thomas Greeting, who was perhaps the most renowned flageolet tutor book author of the period, is not surprising.

Two copies of Greeting’s tutor books are held within the British Library’s collection of English 17th-century printed music: an enlarged third edition of his first tutor book, The Pleasant Companion (shelfmark K.11.e.8.) and a copy of his second tutor book, published in 1682/3 (shelfmark K.4.a.20). Both consist of 13 pages of instruction for the flageolet, followed by (different) sets of tunes, with fingerings supplied for each note. 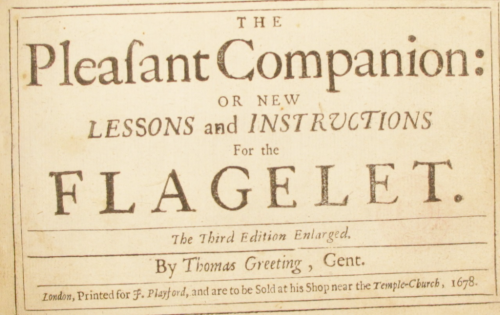 Title-page from the third edition of The Pleasant Companion, British Library K.11.e.8

A closer look at the copy of the second tutor book, The Second Part of Youth's Delight on the Flagelet, reveals two significant imperfections: the insertion of two manuscript pages which have been erroneously supplied from a 1675 edition of The Pleasant Companion – a title-page, and the final page of the ‘Directions for Playing on the Flagelet’.

There is also another, entirely different addition which is far more noteworthy: two monograms of Samuel Pepys in his autograph, which have been inscribed on the blank verso of the last page of music.

The two monograms of Samuel Pepys, in his hand, which appear in British Library K.4.a.20

But does the fact that this volume once belonged to Samuel Pepys shed any new light on his music-making activities? It is already well-known that Pepys was a keen musician, although there is little evidence in his diary that Elisabeth Pepys shared his passion. Her flageolet studies seem to have been rather sporadic, probably indicating that the lessons arranged by her husband were his enthusiasm rather than hers. A month after her instruction had commenced, Pepys still seemed optimistic about Elisabeth’s progress:

Being returned home, I find Greeting, the flageolet-master, come, and teaching my wife; and I do think my wife will take pleasure in it, and it will be easy for her, and pleasant.

But by 17th May he was complaining that she was not doing enough practice and feared that her lessons would seem a ‘bad bargain’ to Greeting.  ‘I did think that the man did deserved some more consideration,’ wrote Pepys, ‘and so will give him an opportunity of 20s. a month more, and he shall teach me, and this afternoon I begun, and I think it will be a few shillings well spent.’

On 9th September, he admits that she has been exceeding his expectations, and three days later he noted that her sight-reading had improved:

[…] and mightily pleased with my wife’s playing on the flageolet, she taking out any tune almost at first sight, and keeping time to it, which pleases me mightily.

It seems that after this point the lessons may have ceased for a while, but a year later Pepys wrote that Greeting had called round to play some Matthew Locke duets with him, and that he had booked his wife in for lessons again, ‘for I have a great mind for her to be able to play a part with me’.

This entry probably holds the key to the real reason behind Elisabeth’s flageolet lessons with Thomas Greeting: namely, that her husband considered that playing duets with him was a logical and entirely reasonable extension of her wifely duties. But where does the British Library copy of The Second Part of Youth's Delight on the Flagelet fit into the picture? The date of the publication is certainly significant. Despite the lack of this copy’s original title-page, the term catalogues reveal that this publication was only printed in the years 1682 and 1683 – well after Elisabeth’s death in 1669, which indicates that Pepys continued playing the flageolet himself after this date. Although this might seem unsurprising on the face of things, it is actually the only real evidence we have to suggest this, since Pepys had also stopped writing the diary in 1669 because of his deteriorating eyesight.

Since the copy bears no annotations besides the two monograms, it is impossible to ascertain whether Pepys would have actually used this tutor book for instruction. Since he would have been far from a beginner by this point, he may have bought it simply to supply himself with a new set of tunes to play, since the songs and dances in this publication are entirely different to those contained within The Pleasant Companion. It is also worth noting that the book includes several pieces by John Banister  – another musical acquaintance of Pepys.

Equally though, the book may have been merely a casual or symbolic purchase – perhaps a gesture of support to his friend, Thomas Greeting, or even a memento of his late wife’s less-than-enthusiastic studies. Nevertheless, the existence of this copy does provide a telling indication that Samuel Pepys’s interest, and presumably his enjoyment of the flageolet, continued until long after its last mention in his diaries.