Music notetaking and composers' thematic catalogues in the 18th century

The Library’s current exhibition Writing: Making Your Mark features a famous Music collection item in the sub-section on Notetakers in the People and Writing section: Mozart’s catalogue of his own works, listing works he composed between 1784 and 1791 ─ just weeks before his death (Zweig MS 63). The manuscript is titled: Verzeichnüss aller meiner Werke vom Monath Febrario 1784 bis Monath 1…  (Catalogue of all my works from the month February 1784 until the month 1…)

The catalogue was used as a notebook by Mozart for recording his music compositions, which he even carried with him when he travelled. Apart from the dates and titles Mozart also recorded other information about the works he listed, such as the instrumentation, the movements they consisted of, performers they were written for or first performed by, dedicatees, dates of first performances and other details.

The entries for each work listed were written on two pages. On the left-hand page Mozart would list the year, month, and even day a work was completed, in addition to the title of the work and any associated information. On the right-hand page he would write the opening bars of music for the corresponding entry on the left-hand page. The music was noted in order to aid the identification of each work, as most works had generic titles such as aria, sonata, quartet etc. making it impossible to distinguish between them from their titles alone. Even today it remains standard practice for scholars compiling composers’ thematic catalogues retrospectively, to record the opening bars of each musical work wherever possible. In addition, composers’ thematic catalogues today also include a unique identifier for each musical work, which for Mozart’s works, whose thematic catalogue was compiled by Ludwig von Köchel (1800-1877), consists of the letter K. from Köchel’s surname plus a number.

Each page in Mozart’s catalogue usually listed five works. The music for each work was written on two staves. In manuscript music notation staves were drawn using a tool called rastrum (plural rastra), which was a five-nibbed pen that was used for centuries for drawing music staves on paper. There also existed multi-nibbed rastra for drawing multiple staves at once.

The image below shows the pages that are currently on display at the Writing: Making Your Mark exhibition, which list entries for works composed between 16 December 1785 and 10 March 1786, namely Mozart’s Piano Concerto, K.482; his comic opera Der Schauspieldirector, K.486; his Piano Concerto K.488; a duet for the revised version of his opera Idomeneo, K.489; and two vocal pieces also for the revised version of Idomeneo, K.490. 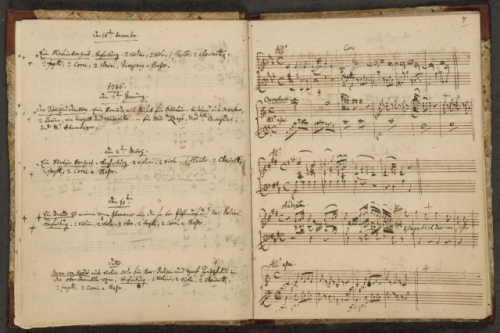 Also shown here are entries made a few years later, between December 1788 and April 1789 for comparison (f. 20v-21r). Note the slight difference in ink colour for each entry which reflects the difference in time of writing, and also the less carefull or hastier appearance of Mozart’s handwriting. The entries here are for his 12 Minuets for Orchestra, K.568; the aria Ohne Zwang, aus eignem Triebe, K.569 (a lost work); The Piano Sonata K.570; the 6 German Dances, K.571, and the Variations for piano on a Minuet by the cellist Jean Pierre Duport, K.573. At the end of the page Mozart also made a note for the arrangement that he made of Handel’s Messiah, K.572. 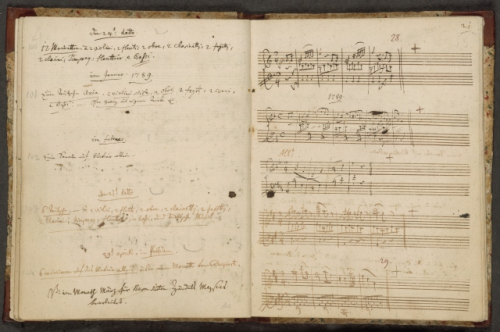 The manuscript has been digitised and is available to view online on the British Library Digitised Manuscripts: http://www.bl.uk/manuscripts/FullDisplay.aspx?ref=Zweig_MS_63 Further information about this manuscript is also available on the British Library Turning the pages: http://www.bl.uk/turning-the-pages/?id=0d3ac4d1-793c-4021-b178-9c666c90f2bc&type=book

Other important items in our collection from this time which complement the one on display are a notebook belonging to Beethoven (Zweig MS 14) and another thematic catalogue in the hand of the composer Luigi Boccherini (Zweig MS 18). Both collection items have been digitised and can also be viewed on Digitised Manuscripts at: http://www.bl.uk/manuscripts/FullDisplay.aspx?ref=Zweig_MS_14 and http://www.bl.uk/manuscripts/FullDisplay.aspx?ref=Zweig_MS_18

Beethoven’s notebook was used by him to record his expenses during his trip from Bonn to Vienna in November 1792 where he travelled in order to study with Haydn, and where he was to remain the rest of his life. Beethoven’s handwriting is notoriously difficult to read, especially in his sketches and documents that he kept for his personal use, but scholars have been able to fully transcribe the contents of this impressive volume.

In this notebook the 22-year-old Beethoven listed detailed expenses for food, drinks, clothing and other expenditure incurred during his journey (some of these are written in a different hand) and also after his arrival in Vienna, including expenses for lessons taken with Haydn which can be seen in the image below: 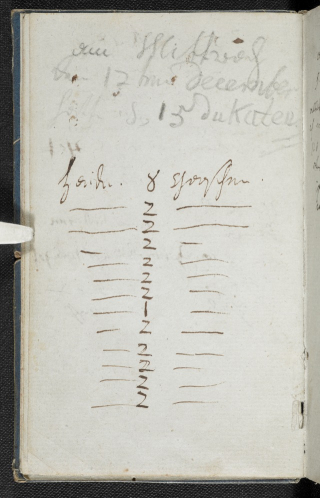 There are two further entries in the notebook that mention Haydn. In the image below the last two lines that are written in pencil list expenses for coffee, presumably during a music lesson: ‘Kaffee 6 x für haidn und mich’ i.e. ‘Coffee 6 x [6 kreutzer] for Haydn and myself’. How extraordinary to have a record of Beethoven and Haydn discussing music over coffee! 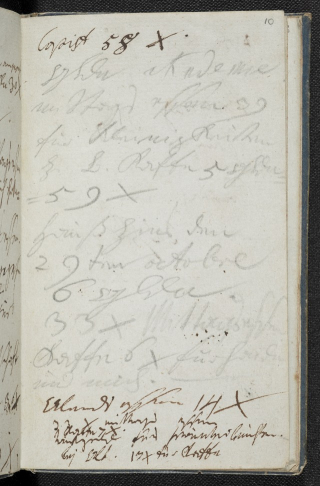 The final collection item shown here is another partial thematic catalogue of works written by the composer Luigi Boccherini (1743-1805). In contrast to the previous two collection items which were created for personal use this is an official business document, stamped at the top and accompanied by a notarial certificate. The catalogue was prepared as part of Boccherini’s dealings with the publisher Ignace Pleyel (1757-1831) in 1796. Pleyel had demanded Boccherini draw up this legal document in order to secure himself as the rightful owner and publisher of the works listed in the catalogue which Boccherini had sold to him. This document was meant to secure his exclusive rights to publish Boccherini’s works, as piracy in music publishing was not uncommon in the 18th century.

Here too Boccherini lists the opening bars of each work, though as this is not a personal document it lacks further details about works as we find in Mozart’s thematic catalogue. Note that opera (plural opere) in Italian means work, so opera 44 in the first entry means work no.44.

These three collection items, which where created only years apart, are unique examples of records that composers made in the 18th century in order to manage their professional affairs, whether these were for personal or official use. Composers’ thematic catalogues in particular are also invaluable today for the identification and dating of composers’ works.