An open and shut case

Until relatively recently, publication practises and dissemination of scholarly works had not changed a great deal since the first journals were launched in the 17th century. However, the advent of computers and, more specifically, a worldwide network of connected computers, enabled sharing of research articles in a way not previously possible. Before the internet we were reliant on publishers to distribute research articles, as printed copies of journals had to be posted to libraries and private subscribers. Now, while publishers remain responsible for packaging research articles as digital works, the dissemination of the article can be done via a variety of other services.

This massive technological leap helped to shift the model of how we share scholarly literature in an equally spectacular way. It enabled something called Open Access.

‘Open access literature is digital, online, free-of-charge, and free of most copyright and licensing restrictions’ (Open Access, by Peter Suber, The MIT Press).

Open access is hugely beneficial for furthering research. And that, in turn, benefits society with advances in healthcare and new technologies, and greater availability of information to inform policies and decision-making. The removal of those barriers imposed by the traditional publishing model – cost to the reader, and copyright restrictions – means that the results of research are more widely available and useful, wherever and whoever you are.

The Wellcome Trust led a progressive movement by research funders by being the first in the world to mandate that papers arising from research they had funded must be open access – and that they must be made available in Europe PubMed Central. They were joined by a growing number of government and charity research funding organisations (for example, those that support Europe PMC),which also made open access publication a requirement of their funding.

Europe PMC is a free life sciences and biomedical information resource that allows you to use keywords to search for research of interest, across nearly 28 million article summaries (abstracts) and patents. Over 2.5 million articles in Europe PMC are free or open access, and the proportion of published work that is open access is growing every year. 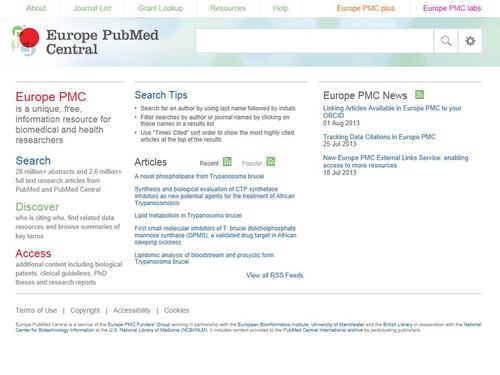 The British Library has been involved in Europe PMC since its inception in 2006. In this digital era, Europe PMC is one way that the Library is providing users off-site with access to scientific information. As engagement manager, I want to let people know about Europe PMC as a useful resource but I also help to ensure that Europe PMC delivers features that will be of benefit, by seeking and understanding community requirements. You can stay up to date by following me on Twitter (@EuropePMC_news) and looking out for more detailed descriptions of developments on the Europe PMC blog.

Of course, access to research does not necessarily equate to understanding of some of the complex ideas described in research articles. Europe PMC and the Science team at the British Library recognise that to achieve maximum benefit from research discoveries, there is work to be done to translate the technical language and scientific jargon into ‘plain English’. With that in mind, we launched a science-writing competition, Access to Understanding, where entrants were asked to do just that. Look out later in the year for an announcement about the 2014 competition.