Decision making in the twilight of uncertainty

Johanna Kieniewicz writes on her impressions from the Living With Environmental Change partnership’s annual assembly.

At the Living With Environmental Change partnership’s annual assembly, Defra’s Chief Science Adviser, Dr. Ian Boyd, presented a stark statistic: in a recent Defra focus group, two thirds of the participants reported that they distrusted scientists. Although we didn’t discover the context for this revelation, many of us walked away from the meeting thinking about how we could do better. How can we ensure more policy-relevant science? How can we communicate it better? And how can we reassure the general public that uncertainty in science is perfectly normal and is not a reason for distrust?

At this same meeting, I was delighted to present on the Science Team’s Envia project. Envia is a tool to improve the discovery and access of environmental information, and it fits the aims of this meeting nicely: that is, to provide researchers, policymakers and practitioners with the evidence and tools they need to make sound decisions in an uncertain world. With a general theme of ‘decision making in the twilight of uncertainty’, the LWEC Assembly brought together a wide range of academics, representatives from research councils and government bodies such as Defra and the Environment Agency, to discuss challenges pertaining to uncertainty and how they might be overcome. Perhaps most importantly, how can we best equip our decision makers with the evidence they need to make sound decisions pertaining to climate change, bovine tuberculosis, or our energy future—when the repercussions of actions taken in any of these areas are far from certain? 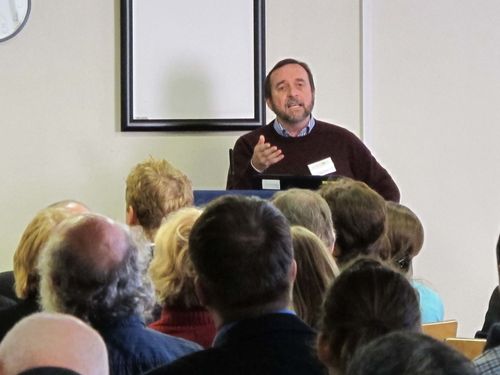 So, while we at the British Library would like to think that we are doing our part around developing an evidence base that is suitable for use by researchers and practitioners alike, we recognise this is one small part of a much bigger picture. Ultimately, this information must be drawn together, synthesised in a way that enables policymakers to make sound decisions based on all the available evidence. And areas of uncertainty should be laid out clearly. Boyd emphasised the importance of scientists presenting balanced arguments, where all evidence is laid bare.  Although we, as scientists (who are also citizens), might personally advocate a particular solution, when communicating in a professional context we must remain unbiased. To be clear, there needs to be the appropriate weighting given to evidence – if 95% of the evidence points one way, we wouldn’t expect the small proportion of contrary evidence to be given the same level of attention. In order for the public to trust scientists, they need to know that we aren’t reading the evidence to see only what we would like to see in it.

With presentations looking at how individual research projects are dealing with uncertainty, including perspectives from the social sciences, here are a few nuggets of wisdom that I thought it would be useful to pass on: The audience at the LWEC Assembly took these messages to heart. We in the Science Team at the Library will be thinking about how some of these ideas can be reflected in what we do. And hopefully we aren’t doing too badly. Our Envia pilot project is already improving the way in which flooding researchers and practitioners can find information that is relevant to their work. DataCite, for which we are the UK lead, enables and encourages the citation and sharing of research data. On the biomedical front, we recognise that even when a paper is openly available, that does not mean it is accessible (from the perspective of intelligibility). Our recently launched Access to Understanding science writing competition encourages early career researchers to summarise academic articles in an engaging and accessible manner. And our upcoming Beautiful Science exhibition will be looking at the visualisation of scientific data, encouraging audiences to consider how science is communicated visually. So while we can’t crack the uncertainty in climate models, we would like to think that we are helping researchers and practitioners get the evidence they need for their work and communicate more effectively to policymakers in an uncertain world.

If you are interested in looking into this in a bit more detail, here are a few useful resources for you!

Sense about Science Guide – Making Sense of Uncertainty: Why Uncertainty is a part of science.

Posted by The Science Team at 9:32 AM