The Evolution of Evolution: Picturing the Tree of Life

Johanna Kieniewicz introduces the section of Beautiful Science that explores the Tree of Life.

In our Beautiful Science exhibition, we explore the evolution of evolution, with a section of the exhibition dedicated to the ways in which we have pictured the tree of life—simultaneously image and metaphor for our relationship and connection to life on Earth.

We start out at the beginning, with an illustration of the universe by Renaissance alchemist Robert Fludd. The ‘Great Chain of Being’  is an ancient Greek concept that classifies life on earth into a hierarchical order with respect to the rest of the universe. A great ladder links God and other divine beings to astronomical bodies, man, animals, plants and minerals. Each animal is fixed on a rung in order of perfection (upwards towards man). This sort of hierarchical organisation of life laid the groundwork for the development of biological classification systems and ultimately evolutionary trees. 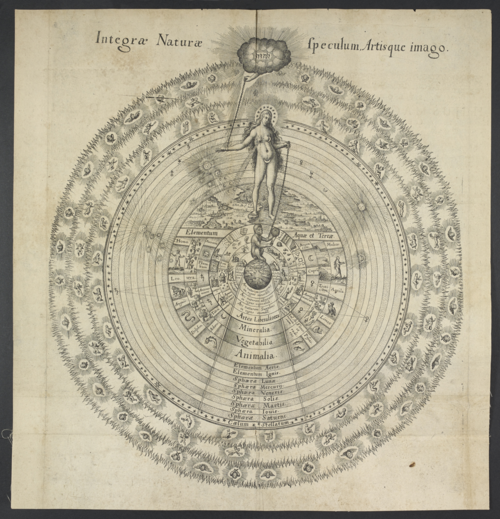 In On the Origin of Species (1859, 1st ed) , Charles Darwin famously used the metaphor of a tree to articulate his ideas around evolution.

‘The affinities of all the beings of the same class have sometimes been represented by a great tree… The green and budding twigs may represent existing species; and those produced during former years may represent the long succession of extinct species. From the first growth of the tree, many a limb and branch has decayed and dropped off; and these fallen branches of various sizes may represent those whole orders, families, and genera which have now no living representatives, and which are known to us only in a fossil state… As buds give rise by growth to fresh buds, and these, if vigorous, branch out and overtop on all sides many a feebler branch, so by generation I believe it has been with the great Tree of Life, which fills with its dead and broken branches the crust of the earth, and covers the surface with its ever-branching and beautiful ramifications.’ 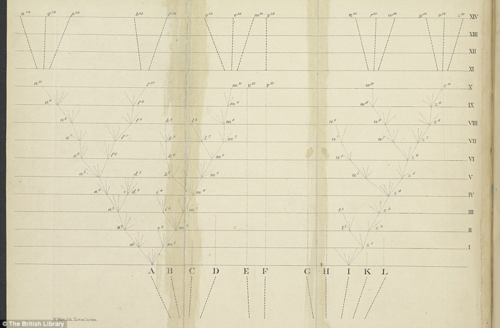 Darwin's diagram picturing his ideas of evolution from On The Origin of Species, Charles Darwin, 1850

German scientist (and talented illustrator) Ernst Heckel was greatly inspired by Darwin’s ideas and sought to devise a great number of trees organising all life on Earth. In The Evolution of Man, Haeckel illustrates the evolutionary history of humans with a great tree, whose trunk represents our ancestral history, as our progenitors moved through stages, such as primitive worms, amphibians and apes. This tree reflects Haeckel’s (albeit not terribly Darwinian) belief that evolution was a process of perfecting, and that humans represented the pinnacle of evolution. Although the diagram reflects the attitudes of its time, it may be seen as a link between the early attempts to hierarchically organise life and contemporary approaches based on ancestral relationships and genetics. 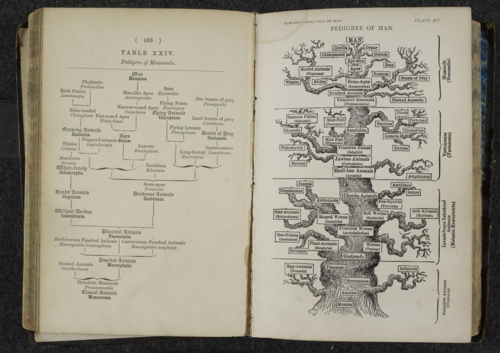 The Pedigree of Man. Ernst Haeckel, The evolution of man. London, 1879.

Whilst the relationships pictured in early evolutionary trees were generally based on inference and shared traits, today’s phylogenetic trees are based on vast amounts of genomic data. In Beautiful Science, we show a ‘molecular time tree’ depicting the evolutionary relationships of all 9,993 living species of birds, illustrating when individual species diverged. The oldest species diverge closest to the centre of the circle, with more recent diversification closer to the edge.  Although modern birds first evolved some 145 – 66 million years ago, this diagram shows that they began to diversify exceptionally rapidly about 50 million years ago. This is particularly apparent for the songbirds, waterfowl, gulls and woodpeckers. 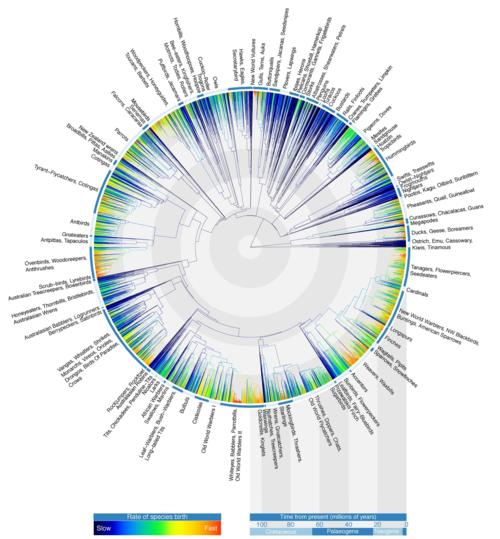 And, indeed here we are dealing with such vast amounts of information that one might begin to wonder whether there were any way in which we could meaningfully depict all of life on Earth on an A4 sheet of paper. There have been some attempts—but Imperial College London researcher James Rosindell has come up with an ingenious solution. One Zoom Tree, an interactive tree of life, allows viewers to zoom into the tree of life and explore the evolutionary relationships between tens of thousands of mammals, birds, reptiles and amphibians.  It  uses a branch of mathematics known as fractal geometry to create an attractive visualisation that can be explored by zooming in, to get ever more detail.  The data includes sounds from the British Library’s collections and evolutionary data from scientific literature including the ‘Avian Tree of Life’ showing how the same data can be pictured in different ways. 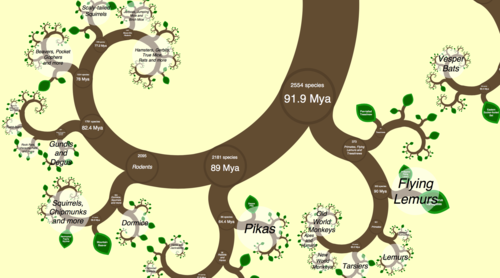 Highly engaging, One Zoom Tree shows how far we’ve come in our ability to rationalise our relationship to the rest of life on Earth.  As you move along the trunk of the tetrapod tree, you see where different branches diverge, and can see relationships between different species. Did you know that the elephant’s closest relatives are hyraxes and sea cows?

Darwin wrote at the end of On the Origin of Species,

“It is interesting to contemplate a tangled bank, clothed with many plants of many kinds, with birds singing on the bushes, with various insects flitting about, and with worms crawling through the damp earth, and to reflect that these elaborately constructed forms, so different from each other, and dependent upon each other in so complex a manner, have all been produced by laws acting around us. . . There is grandeur in this view of life, with its several powers, having been originally breathed by the Creator into a few forms or into one; and that, whilst this planet has gone cycling on according to the fixed law of gravity, from so simple a beginning endless forms most beautiful and most wonderful have been, and are being, evolved.”

These new ways of picturing phylogenetic data are allowing us to better understand this beautiful, messy, complex tangled bank of life on Earth- and equip us with new ways for protecting its incredible biodiversity.

Beautiful Science, sponsored by Winton Capital Management, is on display at the British Library until 26 May 2014 in the Folio Society Gallery. Admission is free.

Posted by The Science Team at 9:42 AM