Over the past few years Team ScienceBL have watched with interest over the building site located at the north end of the British Library’s St Pancras site. The building under construction is the Francis Crick Institute, which when it opens its doors in 2015 will be a leading centre for biomedical research employing over 1000 scientists.

The Francis Crick Institute - viewed from the ScienceBL office window

We are excited that the Francis Crick Institute will be our newest neighbour and were particularly pleased to collaborate with the Crick on this year’s post-docs’ retreat. The event was hosted at the British Library Conference Centre and brought together about 200 post-doctoral researchers from the Crick’s partner institutes for an interactive day of science, careers and networking. This is the third such retreat and the second time we have hosted the event here at the British Library.

The programme was organised by a committee of post-docs from the Crick’s partner institutes and included a range of sessions, covering everything from careers advice to the parasitic behaviour of cuckoos. There was plenty of time for scientists from all six institutes to get to know each other over lunch and in the coffee breaks as well as during a dedicated post-doc networking session. One thing that stood out for me was the non-linear career trajectories that were followed by many of the speakers. Especially enlightening in this regard were talks from Dr Nessa Carey and Prof Mark Lythgoe, both of whom had had varied and non-conventional career paths before ending up where they are now. This was a very refreshing insight for early career researchers who are considering their career options. 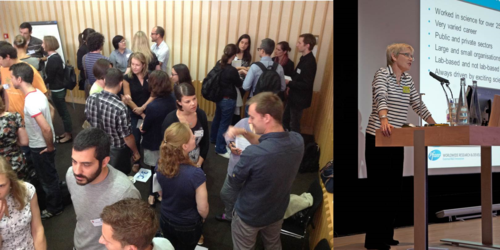 The ScienceBL team were pleased to be invited to host a session entitled ‘Open Access for Early Career Researchers’. From our work with biomedical researchers we know that it is not always clear what is meant by the term Open Access and so in this session we wanted to shed some light on this complicated and often misunderstood area. Our own Anna Kinsey (EuropePMC Engagement Manager) kicked off the session by breaking down some common misconceptions about Open Access and explaining what it means for researchers. Anna went on to explain how EuropePMC can help biomedical researchers access a wide range of Open Access content. The Open Access session also included a thought-provoking talk from Steve Royle (Senior Cancer Research UK fellow at Warwick University) who shared his perspectives on Open Access publishing from the point of view of an early career researcher. Steve pointed out some of the pros and cons of publishing your research Open Access and explained why he felt that it is important for early career researchers to embrace this new development in publishing practice.

The Crick-BL retreat was finished off with a drinks reception in the Library’s terrace restaurant overlooking the Crick building before the post-docs headed off on an urban orienteering trail around the St Pancras area. We think we can safely say a good time was had by all and we look forward to working with the Crick in future years!

Posted by The Science Team at 1:48 PM