My Internship with the British Library Science Team

I applied to undertake a NERC policy internship, hoping to be presented with the opportunity of working at one of eight fantastic organisations.  When I received an email to offering me an internship with the British Library, I was thrilled.  Not only did it feel like a huge achievement to be offered any of the schemes, but the British Library is also a great institution that many of my peers find invaluable to their research.  That said, I was as yet unsure exactly how my time would be spent with the Science Team.  Well, I’m pleased to report, it has turned out to be a hugely varied and rewarding three months.

Without a doubt, the biggest responsibility I’ve had during my time at the Library has been to organise an event for the Science Team’s long running TalkScience series. I am thrilled by the amount of creative control I was entrusted with – from picking the topic and speakers, to tweaking the format of the discussion.  The event took the form of a panel discussion, titled Extreme Weather: Climate Change in Action?, and my aim was to bring together four panellists from distinct spheres (science, policy, press and communication psychology).

When the day itself came around, it felt hugely personal, and I fully expected to be too nervous to hear anything our panellists discussed.  Thankfully, this wasn’t the case, and I was delighted by how broad the conversation was – discussing not only the science linking extreme weather to climate change, but also why improvements in scientific understanding haven’t led to significant changes in public attitudes.  This was also one of the first TalkScience events to be filmed, so feel free to judge the outcome for yourself! 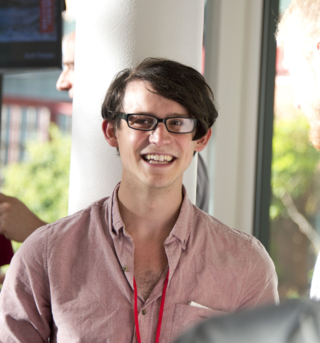 Enjoying the outcome of my hard work at TalkScience!

While organising TalkScience occupied a significant portion of my time, it was by no means my only responsibility at the Library.  The most substantial other task I was given upon my arrival was to begin a project to investigate how various organisations research science policy.  What appeals to me most about this project is its breadth – the number of organisations (from small charities to government departments) and disciplines (from medical to environmental) it could include is truly mind boggling.  Although over the course of my internship I was only able to interview individual from a handful of organisations, this project has already provided me with great insight into the numerous ways science policy is researched, and the – often universal – problems the researchers run into.

My time at the library has been filled with new conversations, completely different from those I encounter in my Physics department (where I’m studying for my doctorate in climate science).   Talking to the other delegates at the 2014 Science Communication Conference opened my eyes to just how broad the area of science communication is, incorporating everything from freelance bloggers, to professional publicists.  Participating in Why is Science Beautiful? – a workshop that brought together artists and scientists – led to debates on the fundamental differences and similarities between artistic and scientific representations, empowering me to see collaborations between these disciplines in a whole new light. 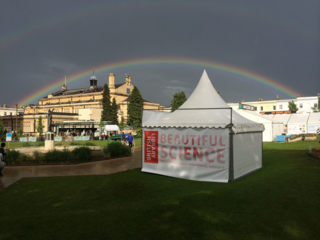 Our tent at the Cheltenham Science Festival

By far the most challenging and engaging conversations I’ve had, however, have been with school children in the Library’s Beautiful Science tent at the Cheltenham Science Festival, where we displayed highlights from a recent exhibition.  Children provide instant feedback.  If your communication isn’t up to scratch, it is instantly rewarded with yawns and vacant stares.  Nothing before has forced me to raise my game so promptly.

All in all, the past three months that I’ve spent at the British Library have been wonderfully varied, providing me with insights into both science policy and communication.  My academic work focuses on climate change, and this is an area where both policy and communication present challenges that are just as great as those we face in the scientific community.  I am certain that the skills and understanding I have gained from this internship will be invaluable for the work I continue to do on climate change – in whatever form that may take.

Are you a NERC, BBSRC or AHRC- funded PhD student interested in science policy? Applications for the policy placement scheme are open until August 18th. Find out more.

Posted by The Science Team at 1:42 PM

I'm looking forward to interviewing for a science policy internship, with the British Library position firmly in mind. I can't say how much more excited I am now that I've read about your experience! The things you got up to sounds like a what's what of the kind of things I love doing outside of my research. Many thanks for posting!