Our latest Beautiful Science video looks back a fantastic evening in which we welcomed Professor David Spiegelhalter and Dame Sally Davies to the Library for a discussion with Michael Blastland about the way in which public health messages are communicated.

In our recent Beautiful Science exhibition, we brought together some classics of data visualisation in the field of public health, showing the impact that powerful images can have in transforming the way we think about our own health and that of our society. But is John Snow's map of cholera deaths, or Florence Nightingale's rose diagram of deaths in the Crimean War really better than a table of numbers, like John Graunt’s Table of Casualities, based on his amalgamation of the data contained within the London Bills of Mortality? When it comes to our health, how and why do we make decisions to reform, or not reform our unhealthy behaviours?

Discussing this important question are:

Michael Blastland, writer, broadcaster and author of the Tiger that Isn’t

Isaac Newton is calling you…

Rachel Huddart takes a call from one of history’s most famous scientists.

Visitors to the British Library will have probably seen the statue of Isaac Newton crouched over the piazza. Newton has been part of the Library since we opened in St Pancras in 1997 but has always stayed pretty quiet, until now.

As part of the ‘Talking Statues’ project which is running in London and Manchester, Newton has finally been given a voice by the playwright Timberlake Wertenbaker and the actor Simon Russell Beale. Anyone with a smartphone can scan the plaque on Newton’s plinth and receive a phone call from the great man himself, who talks about his early life, his scientific and mathematical discoveries and his work as Master of the Royal Mint. 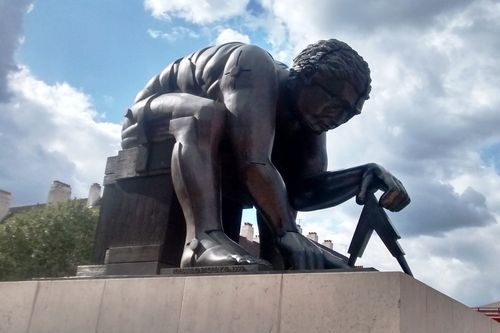 Within the Library’s collections, there are several documents from Newton’s adult life. Amongst his scientific papers, there are early editions of his famous book Philosophiæ Naturalis Principia Mathematica, where Newton described his laws of motion and his law of universal gravitation, as well as the less well-known but impressively titled volume: A New and most Accurate Theory of the Moon's Motion; whereby All her Irregularities may be solved. The British Library’s collection also contains Arithmetica Universalis, which is based on Newton’s lecture notes from his time as Lucasian Professor of Mathematics at Cambridge University and his book The Method of Fluxions, which details Newton’s work in the development of calculus. As Newton himself points out, we still use his discoveries every day; from satellites orbiting the Earth (using his law of universal gravitation), to the smartphone you use to hear his statue speak (which relies on calculus). 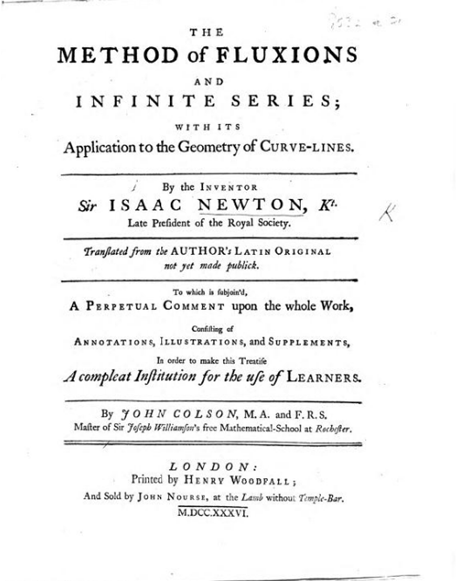 Title page of The Method of Fluxions (Copyright: British Library Board)

When I started work at the Library, Newton’s statue struck me as a strange way to honour one of our greatest scientists. He doesn’t stand proudly over the piazza, gazing out at the visitors, but is bent over his compass, seemingly oblivious to everything around him. There isn’t even any sign of the famous apple. Surprisingly, the sculptor who created the statue, Eduardo Paolozzi, used a picture that criticises Newton as his inspiration. William Blake’s study of Newton, which is on display in Tate Britain, shows Newton sitting on a rock, absorbed in his work and ignorant of the colour and beauty on the rock that he sits on. The print is believed to show Blake’s disdain for Newton’s scientific thinking at the expense of nature and creativity. Paolozzi saw the work as a connection between the arts and science and between two great historical figures, despite their differences.

At the moment, Newton is the only statue at the British Library to be given a voice but it won’t be too long before he is joined by the statue of William Shakespeare which stands in the entrance hall of the Library. Talking Statues are running a competition to give members of the public the chance to write the script for Shakespeare and three other statues involved in the project. The winning monologues will be recorded by a famous actor and Shakespeare will be chatting to the public before Christmas.

Counting Sheep: The Science of Sleep

Despite the fact that we spend a third of our lives asleep, the fundamental purpose of sleep is still poorly understood. Back in March we hosted an interactive evening event in collaboration with our friends over at UCL Neuroscience exploring the stuff that dreams are made of. Talks by Professor Russell Foster (University of Oxford) on the crucial role of our eyes in influencing sleep cycles, and from Professor Vince Walsh (UCL) on the benefits of sleep, were beautifully interspersed by a dream-inspired opera from Impropera. Audience members also explored how sleep is represented in art, took part in a myth-busting quiz about sleep, and listened to relaxing sleep sounds from the British Library’s audio collections.

If you missed it then you can now watch a highlights video here and find out more about the presenters and performers in the event programme.

Stay tuned for more videos of Beautiful Science events in the coming weeks.

Posted by The Science Team at 9:20 AM

TalkScience @BL – Biotech on the Farm: Food for Thought?

As a fairly committed meat eater, going vegetarian is quite low down on my ‘to do’ list. But researching the subject for our next TalkScience event might force me to have a rethink. Our love of meat is fast becoming a serious issue. As the need for us to switch sustainable agriculture becomes more apparent, the myriad effects of livestock on the environment and, consequently, on our future food supply, are becoming too big to ignore. It has been calculated that, if the entire population of the UK switched to a vegetarian diet, it would have the same effect on the environment as taking half of the nation’s cars off the road. 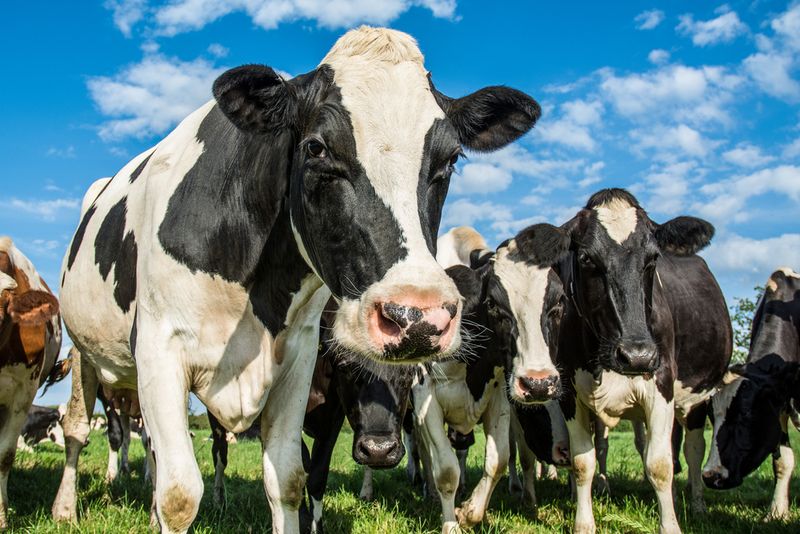 Cows in a field. A good source of food or an environmental menace? (Copyright stefbennett: Shutterstock)

Is this environmental damage too much to pay for access to cheap meat? Should we cut out all the burgers, roast dinners and kebabs from our diet for the sake of the planet? Can biotechnologies, like genetically modified livestock or the “stem cell burger”, help strike a balance between our desire for meat and our responsibility to look after the environment? Are these biotechnologies safe for us to eat and, even if they are, would we want to eat them?

Join us on 30th September for our 26th TalkScience event where we will discuss the future of meat production. Join Catherine de Lange(New Scientist) chairing our expert panel including Professor Helen Sang(Roslin Institute) and Vicki Hird (Friends of the Earth). Tickets cost £5 and are available to book from the Box Office.

Posted by The Science Team at 9:30 AM

In March 2014, Festival of the Spoken Nerd: stand-up mathematician Matt Parker, geek songstress Helen Arney, and experiments maestro Steve Mould hosted an evening at the BL exploring the laughs, graphs and gaffs of science. This highlights video gets to the chart of the matter, as the Nerds plot a course through the highs and lows of visualising data.

The Nerds were joined by an outstanding set of guest geeks including citizen science gurus Erinma Ochu, Jonathan  Swinton, and the BL’s own data visualisation experts Richard Ranft, Christina Duffy, Nora McGregor and Johanna Kieniewicz who gave the audience an opportunity to get down and dirty with data in live experiments, and hear the back story to the Beautiful Science exhibition.

From human Venn diagrams and chicken-based infographics, through vocal visualisations and sunflower maths, to a mathematically-accurate love song (with greater than 95% confidence) - prepare to eat humble pi!

Check out the event programme to find out more about those involved.

And watch out for our next Beautiful Science event video, coming soon...

As regular readers of this blog will know, earlier in 2014 we hosted the British Library’s first science-led exhibition: Beautiful Science. From classic diagrams from the Library’s collections to contemporary digital displays, Beautiful Science explored how the visualisation of scientific data is crucial for making new discoveries and for communicating those discoveries effectively. Nearly 70,000 people visited the Beautiful Science exhibition over its three month run at the Library, with thousands more experiencing the exhibition at Cheltenham Science Festival.

Beautiful Science also comprised a spectacular season of events that ranged from serious debate to comedy, from family fun days to data visualisation workshops, from competitions to hands-on experiments.

If you missed out on the fun, or just want to remind yourself of what happened, then you can watch a highlights video of the season.