From bombers into airliners…

This week we bring you the first blog post in a series about the science, technology and medicine that emerged from the First World War. Richard Wakeford investigates:

Amid all the attention given to the First World War, its impact on the years that followed is often overlooked. Science played a major role in the war and from 1919 many of the wartime developments in science and medicine came to have peaceful uses. This was no more keenly felt than in the field of civil aviation.

Britain, France and Germany had all entered the war with light reconnaissance aircraft weighing a few hundred pounds and flying for a hundred miles or so. But by the end of the war Britain had heavy bombers that could fly to Berlin with a one ton bomb load. Aeronautical engineering on a scientific basis had started at Farnborough and the National Physical Laboratory with research on aerodynamics in wind tunnels and the use of aluminium in lightweight airframe construction, but in many ways these heavy aircraft were no different from those that entered the war, they were just bigger. What did make the difference were the powerful new engines – and if one engine can be singled out it was the Rolls Royce Eagle. 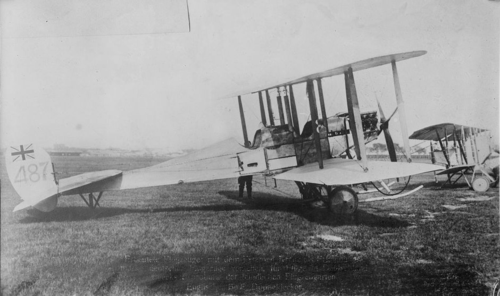 A BE2 in France 1915 (Image: Wikimedia Commons, public domain image)

Henry Royce, one of this country’s greatest engineers, was in the summer of 1914 building the Silver Ghost, the top of the range luxury car. But by October he had converted the Ghost’s straight-six engine to a V12 aero engine and laid down the groundplan for a generation of engines that culminated in the famous Merlin that powered the Spitfire, the Lancaster and the Mustang in the Second World War. Aircraft of the 1914 vintage such as the BE2 had an engine delivering only 80 horsepower, by 1918 the Vickers Vimy gave, what was for that time, a massive 720 horsepower. 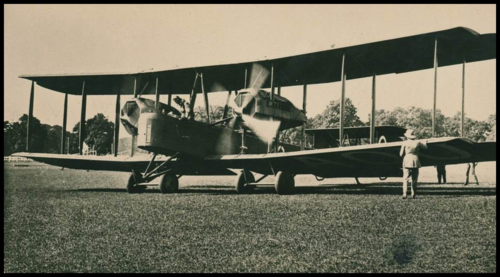 Sir Ross and Sir Keith Smith's Vickers Vimy after the flight to Australia in 1919 (Image: Wikimedia Commons, uploaded to Flickr by bidgee)

Once the Armistice was declared, firms like Vickers and Handley Page were left with cancelled government contracts and fleets of unused aircraft. They responded by inaugurating regular passenger services to the continent and by showing that their planes were reliable enough to fly long distance routes to the Empire. Before the war the Daily Mail and other newspapers had set up prizes for flying achievements. In 1909 Bleriot had flown 30 miles across the Channel to win the prizes but by 1919 the Atlantic was the new challenge. So on July 14 Alcock and Brown took off from Newfoundland and 16 hours later landed in Ireland, a non-stop flight of 1890 miles. (The original aircraft can still be seen at the Science Museum). The strength and reliability of the Vimy was further tested by brothers Ross and Keith Smith and two mechanics in their flight to Australia a few months later, flying 11,130 miles in stages from London to Darwin.

"Yesterday I was in America... and I am the first person in Europe to say that”
Captain John Alcock June 15 1919

The international scheduled flights that also started in 1919 did not attempt these heroic distances but provided a shuttle service between European cities. Flights from London to Paris started at Hounslow Heath (just a runway’s length from today’s Heathrow) and soon after operations moved to Croydon which became London’s international airport until the Second World War. All the paraphernalia of modern flying, with air traffic control, night flying, customs sheds, and dedicated weather reports were pioneered in the early years of  Croydon but in 1924 Cricklewood aerodrome, the home of Handley Page, became the scene of the world’s first fatal civil air accident. For a few years Britain led the world in aviation, introducing the world’s first purpose designed airliner, the Vimy Commercial in 1919, but its lead was soon overtaken by more advanced aircraft designs from USA and Germany. Croydon airport closed in 1959, Vickers and Handley Page disappeared within the British Aircraft Corporation (today’s BAE Systems), leaving Rolls Royce as the only name to survive from the early years of flight.