Francis Owtram explores how Indian Ocean tsunami research is being enhanced by the Qatar Digital Library (QDL), a new bilingual, online portal of archival material relating to Gulf history and Arabic science. This is the first post in a series about the potential of the QDL to provide easier access to historic information for use in contemporary scientific research.

This month marks the 10th anniversary of the 2004 Boxing Day tsunami which wreaked havoc around the Indian Ocean leading to the loss of over 250,000 lives. Following this calamitous event there has been increased international effort to understand and predict sources of future tsunamis in the Indian Ocean. To do this many scientists study seismic behaviour from historic eruptions however a key challenge is gaining access to original observational data. Digitised historic material such as that found within the Qatar Digital Library is therefore a useful source of information that can assist this important research.

To predict future tsunamis in the Indian Ocean, significant scientific attention has focused on historic activity at the Makran subduction zone, a giant fault slanting beneath the Arabian Sea coast of Pakistan and Iran. 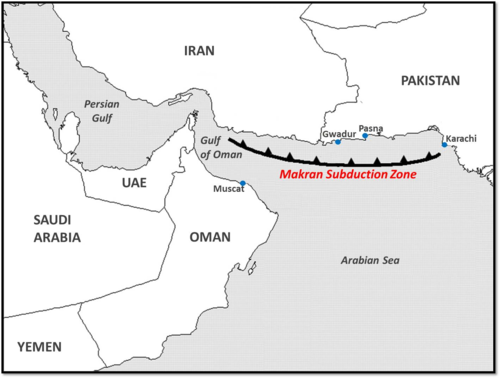 Of particular interest is a massive quake that took place on 28 November 1945 and caused a tsunami that killed over 4000 people in the Indian sub-continent, Iran and Oman. Along with interviews of survivors, original documents can provide vital information on this historic event.

When Professor Din Muhammad Kakar, a geologist at the University of Balochistan in Pakistan, contacted the British Library requesting information on the 1945 earthquake, attention turned to the new Qatar Digital Library portal. The Optical Character Recognition (OCR) software embedded in the portal was able to pull out references to the 1945 earthquake and tsunami in reports submitted by British Political Agents posted in the area.

In one document political agent Ralph Hallows recorded that a small island was thrown up off the coast of Gwadur by ‘volcanic activity’ (left image). Dr Gemma Smith, a geophysicist at the National Oceanography Centre, Southampton, notes that: "Rather than a magmatic volcano, this is likely to refer to a mud volcano produced by the movement and uplift of sediment under high pressures. A similar phenomenon occurred during a recent (2013) earthquake in this region, lending increased credibility to these historical reports of islands appearing offshore".

Another report records the much greater damage inflicted by the earthquake and ensuing tsunami further along the coast at Pasna. This document records that the underwater cable link between Muscat and Karachi was damaged affecting communications (right image). Search terms such as ‘earthquake’ and ‘tidal wave’ can reveal further instances of seismic activity including an earthquake in 1911. 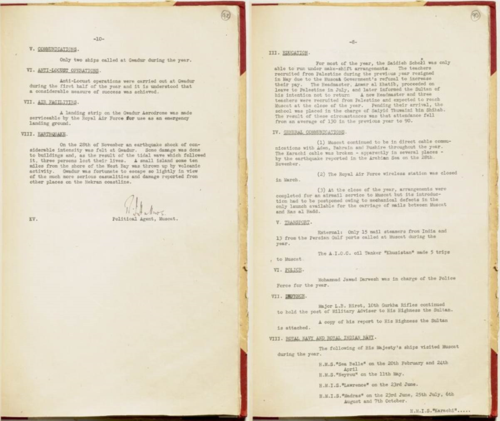 The value of historical data

Dr Smith explains the value of these detailed historical records: "There's quite a lot of uncertainty surrounding historical seismicity in this region, specifically regarding which fault zone any particular historical earthquake is sourced from, as there are many active plate boundaries in the surrounding area. In light of this complexity any additional historical earthquake records (especially those with good locational information) can be very helpful. Other particularly useful content would be any specific information regarding the level of damage to structures as this can assist with magnitude estimation".

Being able to predict future quakes more accurately enables assessment of potential impacts on the environment and can also inform disaster planning such as Professor Kakar’s earthquake preparedness lessons carried out in schools in Pakistan. This case study illustrates how historical data can be useful to contemporary scientists. The meticulous record keeping and detailed observations in reports held within the QDL archive, combined with the powerful OCR technology, mean that the QDL portal is a particularly rich resource for this type of work.

The Qatar Digital Library (QDL) provides access to previously undigitised British Library India Office Records archive materials relating to Gulf history as well as Arabic scientific manuscripts. The portal was launched earlier this year by the British Library Qatar Foundation Partnership. Up to 500,000 images of items from the British Library’s India Office Records are now freely available online for the first time, with content ranging from archives, and maps, to sound recordings and photographs. Another key part of the QDL is the selection of Arabic manuscripts from the British Library Collections dealing with scientific subjects such as medicine, mathematics, astronomy, engineering and chemistry. The first 40 of these manuscripts were put online in October and an announcement including a list of these can be found here. There are now 50 scientific manuscripts on the portal, containing over 120 different texts.

Posted by The Science Team at 2:49 PM

Wishing you a Merry Crystal-mas from DataCite UK

As 2014 draws to a close, it has been another busy year for us here at the Library running DataCite UK. Over the past 12 months the number of organisations that are now using DataCite DOIs in the UK has gone up to 26.

One highlight from earlier in the year was the minting of 3millionth DOI, which you can find here: http://doi.org/10.5517/CCPHZ37. This was minted as part of the work by the Cambridge Crystallographic Data Centre to assign DOIs to their crystallographic datasets. This has been a particularly nice milestone to have as 2014 has been the International Year of Crystallography.

In this year of crystallography, CCDC are by no means the only crystallography database getting DOIs for their data. Both eCrystals (http://ecrystals.chem.soton.ac.uk/) based at Southampton and the SPECTRa project at Imperial (https://spectradspace.lib.imperial.ac.uk:8443/handle/10042/13) are doing the same thing. 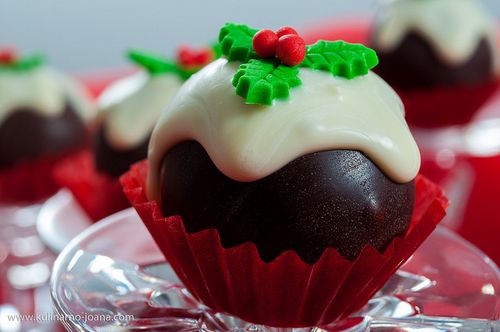 Theobromine is a key flavour compound in milk and dark chocolate, and the reason you can't feed it to your pets: theobromine is particularly toxic to animals. Image from Flickr, CC-BY-NC-SA. https://www.flickr.com/photos/jhard/11399049754