The Knowledge Quarter, with the British Library as its nucleus, is the name given to a London hotspot of technology, knowledge, art and science organisations and - this should be the exciting bit - of interdisciplinary and interpersonal collaboration, and of pulling together resources in new ways. But when George Osborne launched the Knowledge Quarter in December 2014 he was perhaps running to catch up with what has long been hatching here. Laurence Scales looks at three examples from the last 125 years of scientists in the area crossing boundaries.

You may have thought that statisticians never bothered in practice with all that coin tossing. Not true! Karl Pearson (1857-1936) ‘occupied part of the vacation of 1892 with 2400 tosses of ten shillings at a time’.

In the wake of Darwin the mechanism and rules of biological inheritance remained obscure and an effort was launched by the Royal Society to probe the subject by conducting statistical inquiries into the measurable characteristics of plants and animals. To this end Pearson established a biometric laboratory at University College London. Unfortunately, in Pearson’s case the quest for understanding nature also became entwined with his Victorian prejudices and he veered off into eugenics. However, in his statistical work he looked for patterns in raw data, investigated covariance (correlation) and revived interest in Bayes’ rule (trying to work backwards from measured probabilities to select between hypotheses). 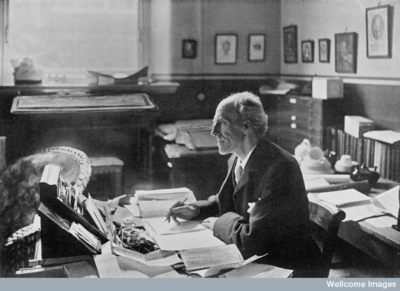 Pearson recruited skilled human computers armed with mechanical calculators and, when war broke out in 1914, he was able to redeploy them outside biology, providing the government with graphs concerning shipping and imports on which the war effort depended. His team also took on aeronautical and ballistic calculations. Solving these problems required not just brute force but simplification and efficiency.

Pearson had thus developed some of the basic tools of data mining or ‘big data’ analysis, the projected domain of the Alan Turing Institute which has a place reserved in the Knowledge Quarter. The Francis Crick Institute behind the British Library will, no doubt, be using such algorithms to mine data from medical records.

About a kilometre north west from the British Library is the last home of molecular biologist J. D. Bernal (1901-1971). In 1943 Bernal worked for Combined Operations Headquarters, a collaboration of army, navy and air force then focused on planning the 1944 invasion that liberated Europe. This may just sound like an exercise in military might but preparations also necessitated the use of every possible source of information.

A lesson from that campaign is that collaboration is not always the automatic and harmonious outcome of proximity. Chief of Combined Operations, Lord Louis Mountbatten, knew that he had not only to shake his headquarters service chiefs out of their grooves but also inject new knowledge and imagination to solve military problems. Bernal was one of those he recruited for the purpose. Habitual secrecy also had to go: Bernal could not provide a good answer until he was sure he was being asked the right question. 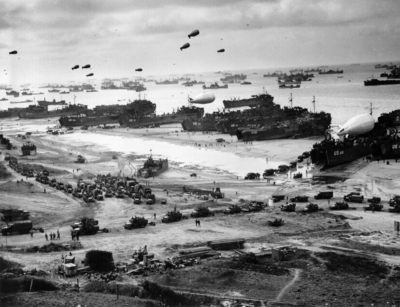 Bernal possessed extraordinary knowledge and intellect, not limited to molecular biology. (But he once remarked, when pressed, that he knew nothing at all about the fourth century in Romania.) He set about investigating, without having access to the Normandy beaches, the physics of waves and sand and the shoreline geology of the area. An important source was the British Museum (the British Library’s former home). He began by consulting a pre-war guide book. Eventually, his desk was even strewn with reports in Latin. The Romans used certain areas of Normandy as a source of peat for fuel, and peat meant peat bogs, unsuitable ground for assault vehicles. The invasion plans of 1944 reflected this accordingly and were largely successful – something else you might not have known that the Romans did for us.

In 2013 visitors to the London Canal Museum, a few blocks north east of the British Library, were invited to don a hard hat to descend into the dank Victorian ice wells. For a few weeks the caverns which once stored Norwegian ice to preserve London’s fish and freeze its ice cream were home to Covariance, a sparkling art installation inspired by subterranean particle detectors and sponsored by the Institute of Physics. (Both organisations are near neighbours and now KQ partners). 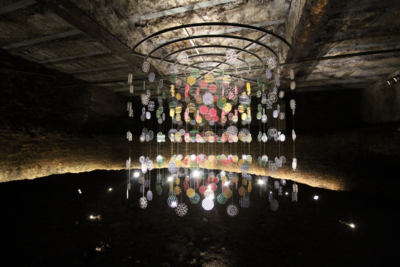 Covariance was a way for both parties to engage with new audiences and the museum also used IT to make the artwork accessible for those unable to visit or scale a ladder. We don’t yet know whether any new ways of processing particle data have emerged from looking at the artist Lyndall Phelps’ glistening ‘diamantes’. While the ice wells may well have turned some young minds towards ice cream, it might just also have turned a few in new directions.

Laurence leads unique and eclectic London tours focused on the history of discovery, invention and intelligence, most recently one devoted to Geeky Ladies.  He is a graduate in engineering and has worked in various technological industries.

When Computers Were Human by David Alan Grier,2005

The Theory That Would not Die by Sharon Bertsch McGrayne, 2011

The Watery Maze: The Story of Combined Operations by Bernard Fergusson, 1961

Posted by The Science Team at 5:16 PM

DataCite Case Study: ForestPlots.net at the Unviersity of Leeds

In June last year, we held a DataCite workshop hosted by the University of Glasgow. We've now turned our speaker's use of Digital Object Identifiers (DOIs) for rainforest data into a video and printed case study.

You can still find a short summary of that event here. Our thanks go to Gabriela Lopez-Gonzalez for taking the time to come and film with us.

We hope that this case study will help institutions promote the idea of data citation and use of DOIs for data to their researchers, and that this in turn will encourage more submission of data to institutional repositories.

A DataCite DOI is not just for data

During January we had also been trying to spread the word that DOIs from DataCite aren't necessarily just for data. We've been working with the British Library's EThOS service to look at how UK institutions might give DOIs to their electronic theses and dissertations.

There was an initial workshop to divine the issues in November 2014, and on 16th January we held a bigger workshop, bringing more institutions together to look at how we might start to establish a common way of identifying e-theses in the UK.

The technical step of assigning a DOI to a thesis is relatively straightforward. Once an institution is working with DataCite (or CrossRef) they can use their established systems to assign a DOI to a thesis. But the policies surrounding the issue and management of this process are more complex. We're hoping that these workshops have helped everyone to pull in the same direction and collaborate on answers to common questions.

This work has given rise to a proposal to look at how to improve the connection between a thesis and the data it is built on. By triggering the consideration of sharing the data supporting a thesis, maybe we can "get 'em young" and introduce good data sharing practice as early in the research career as possible. Connecting the thesis and its data also increases the visibility of both, helping early career researchers to reap the benefits of their hard work sooner.

Watch this space to see what happens next!

Posted by The Science Team at 3:24 PM