With the Access to Understanding awards ceremony just about wrapping up, we can now announce the winners…

First place was awarded to Philippa Matthews for her entry ‘Rolling back malaria: A journey through space and time’, which described research exploring the changing patterns of malaria risk across Africa. The piece was praised by our judges for its enthusiasm, clear writing style, and sense of narrative; “using the facts to tell the story” with a “sense that the research team were on an expedition”. Congratulations Philippa! 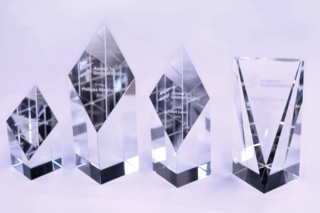 Second place went to Juliet Lamb for her entry ‘Who you are, or who you’re with? Age predicts disease risk’. The judges felt that it was “confidently written” and did a “great job of clarifying the use of mathematical models in research”. And third place was awarded to Peter Canning for his entry ‘Breaking through cancer’s acid shell’ which “didn’t shy away from the hard science” of drug absorption in the acidic environment around tumours.

And finally, the People’s Choice Award – a key part of our competition – read by you and voted for by you. The overwhelming response to the award, with over 1600 votes across all entries, yet again demonstrates the public appetite for accessible science writing. This year’s winner with over 400 votes was Sabrina Talukdar with her entry ‘The persistent perils of puberty’. One reader commented that it was a “well written piece, making the original paper very accessible to lay people” which is exactly what Access to Understanding is about.

The standard of entries this year was very high, and it’s great to see the enthusiasm, talent and motivation of all the scientists who entered the competition.

You can read all of the shortlisted articles on our website, with topics ranging from body clocks to tinnitus. If you want to delve deeper, every article is also accompanied with a link to the original research paper freely available from Europe PMC – the European gateway to biomedical research.

Posted by The Science Team at 8:30 PM

Congrats to all the winners! :)