The Importance of Understanding Number Entry

EThOS at the British Library and our partners Research Councils UK and Vitae recently ran our inaugural #ShareMyThesis competition. The competition challenged PhD students past or present to summarize why their research is/was important in 140 characters or less. For more information see the competition webpage here.

The overall winner was Sarah Wiseman who succinctly conveyed the importance of her PhD research at UCL in the following tweet:

#ShareMyThesis Typing numbers wrongly in hospitals can kill people. Understanding why it happens can help design better systems and stop it!

Have you ever dialled a phone number incorrectly and ended up talking to the wrong person on the end of the line? Most people have, and it can be a little embarrassing (although occasionally it has been known to result in romance). Now, have you ever typed a number wrongly when setting up a bank transfer? That’s a bit more annoying, and many people have lost a lot of money by sending it to the wrong person. But that’s only money. Sometimes the consequences of number entry error can be even more severe: when a doctor or nurse types a number incorrectly into a medical device the patient can receive a serious overdose. This, unfortunately, is not a rare occurrence, and there are regularly cases reported in the news of a number entry error resulting in the harm or even death of a patient.

Often in the media the response is to blame the nurse or doctor for being sloppy. This reaction means that medical workers can themselves become victims of the incident as they are portrayed as being solely responsible for the otherwise avoidable death of a patient.

Although they have different consequences, the reasons we make errors when typing numbers in the hospital is no different from when we dial the wrong phone number. Sometimes we just make an error when entering numbers because humans are fallible and are even more so when asked to work in high-stress environments such as the hospital. Blaming the medical workers involved in these cases will not help to prevent future errors from happening. 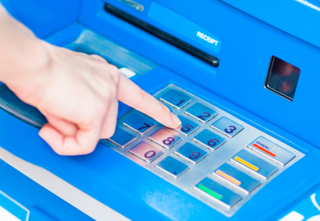 One way to reduce the number of these tragic incidents from occurring is to improve the design of medical devices. It has been shown that some number entry interfaces found on medical devices, such as those used to administer drugs to patients, can be unpredictable. Other interfaces obscure key numbers from users, making it difficult for them to notice any errors they’ve made. In safety critical situations it is important the device interfaces are as intuitive and easy to use as possible.These systems are poorly designed partly because we haven’t understood how people type numbers. It is for this reason that I focussed on understanding how users transcribe numbers in my PhD thesis. During my research I was able to show that there are patterns in the numbers entered by medical workers when programming some devices, and that these patterns affect the way that the numbers are transcribed. These common numbers have so far been overlooked when testing number entry interfaces. By incorporating this information into the testing process, interfaces can be examined in more realistic ways.

It isn’t just testing practices that could be improved however; the design of the number entry interfaces themselves can also be altered. Further research in my PhD showed that adapting the interfaces to match these regularly used numbers significantly reduced the number of key presses required, which could reduce the opportunity for error.

These were just a few insights from my PhD work, but they highlight that current practices in number entry research and design stand to be updated and improved. Knowing more about the number entry task can allow for more thorough and accurate testing of interfaces. This would mean that they could be made as error proof as possible. Hopefully by incorporating the number entry research that both myself and others are doing, medical devices in the future can be designed with the user in mind. In doing so we might be able to reduce the occurrence of avoidable, and life altering errors.

Sarah completed her PhD with Anna Cox at UCL’s Interaction Centre. Her work was funded by UCL Psychology and Languages Department with additional funding from EPSRC through the CHI+MED project. Her thesis is available here. Sarah is now working as a post doctoral researcher based at both University College London and the Open University. At the OU she is working on a project that aims to explore how technology can improve accessibility to the arts for people with visual impairments. At UCL she is continuing her PhD topic by researching number entry error and the possible causes.

A medieval potion, described in a 1000 year-old manuscript kept at the British Library, has recently been shown to have 'astonishing' antibiotic properties, capable of defeating the 'superbug' MRSA. Boudewijn Dominicus looks at the science behind this 'ancientbiotic'.

Medieval medicine is often seen as a bit of an oxymoron. With practices such as bloodletting commonplace1, many would say this reputation is deserved. Indeed the word for ‘leech’, a creature synonymous with medicine of the era, is derived from the Anglo-Saxon word for physician ‘laece’2. 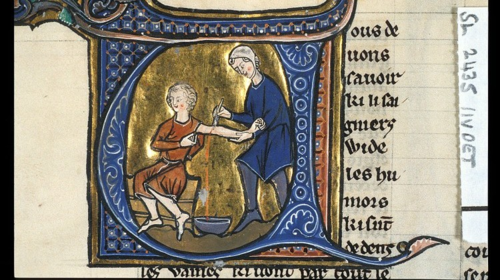 Although many treatments were ineffective or even harmful, careful analysis of Old English medical texts has revealed that not all of them were as backwards as we imagine. For example, there is evidence that honey was used as an antiseptic – its high sugar content and low levels of hydrogen peroxide destroying bacterial cells3.  Another example was the use of the herb marrabium vulgare (horehound) to treat coughs – horehound is still used today in some throat lozenges4. Some of these treatments required specific identification of herbs, careful preparation and appropriate administration. Such examples show that Anglo-Saxon physicians were willing to experiment, see what worked and from that, occasionally, find an effective cure – formulating simple compound drugs using a prototypical scientific method.

But now, researchers from the University of Nottingham have discovered a medieval treatment for eye infections which puts even some modern medicines to shame. The eye salve described in Bald’s Leechbook, a 9th century medical manuscript held by the British Library, was tested by a team of microbiologists at Nottingham University’s Centre for Biomolecular Sciences and was shown to kill one of today’s most notorious antibiotic-resistant bacteria: Methicillin-resistant Staphylococcus aureus (MRSA). 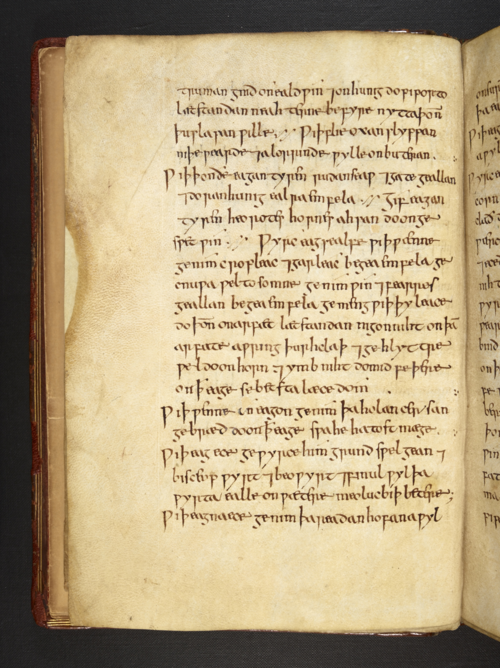 Dr Christina Lee, an Anglo-Saxon expert from the University’s School of English, translated the recipe which was made from a mixture of garlic, onions, wine, and bovine bile salts, all of which were then brewed in a brass cauldron and let sit for nine days:

The microbiologists made three batches and tested them on cultures of three commonly found and hard to treat bacteria, Staphylococcus aureus, Staphylococcus epidermidis and Pseudomonas aeruginosa in both synthetic wounds and in infected wounds in mice. The results were then compared to a control treatment using the same recipe, but without the vegetable compounds. On their own the ingredients had no measureable effect, but when combined the mixture was startling effective: only about one in a thousand bacteria survived application. Vancomycin, the current antibiotic of choice against MRSA, has approximately the same level of antibacterial activity.

The scientists then diluted the eye salve, investigating its effectiveness at different concentrations and exploring its possible mechanism of action. Interestingly, they found that when the medicine was too dilute to kill Staphylococcus aureus, it interfered with bacterial cell-cell communication (quorum sensing). Quorum sensing is essential to the formation of biofilms; a means by which bacteria aggregate together to form a cell colony. Biofilms can promote bacterial antibiotic resistance by forming a dense outer film around a colony which is impervious to antimicrobials such as antibiotics and detergents. As such, many microbiologists think that blocking this behaviour could be a means of combatting antibiotic resistance.

Bald’s remedy certainly confirms that this approach is promising. Many of the microbiologists involved were surprised by the efficacy of the treatment. Dr Freya Harrison, who led the work in the laboratory at Nottingham, commented that they were “hopeful that Bald’s eyesalve might show some antibiotic activity, because each of the ingredients has been shown by other researchers to have some effect on bacteria in the lab – copper and bile salts can kill bacteria, and the garlic family of plants make chemicals that interfere with the bacteria’s ability to damage infected tissues. But we were absolutely blown away by just how effective the combination of ingredients was.”

The next step is to investigate why the combination confers such powerful antibiotic activity; in isolation each individual ingredient has little effect. Understanding how and why these ingredients interact may inform the development of new drugs which could help us combat the ‘evil that is antibiotic resistance’.