Over the Ice: Polar Exploration from the Air

This summer our colleagues over in the Eccles Centre for American Studies are hosting their annual Summer Scholars Seminar series - several of which have a scientific flavour. In this post Marionne Cronin from the University of Aberdeen discusses how aviation changed the nature of polar exploration ahead of her talk on 7th August. Tickets are available here. 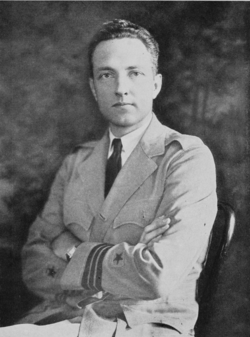 For Americans, the spring of 1926 was an exciting time in long-distance aviation.  The newspapers were full of thrilling tales of pioneering flights, including three aerial expeditions aiming for the North Pole.  The excitement came to a head on 9 May 1926, when Richard E. Byrd, a young American naval aviator, returned to his expedition’s base at King’s Bay, Spitsbergen (Svalbard), after a flight of just over 15 hours, proclaiming that he and his co-pilot Floyd Bennett had become the first people to reach the North Pole by air.  Byrd’s announcement triggered a patriotic outpouring in the American press, with headlines trumpeting the United States’ polar conquest.  Byrd returned home a national hero, where he was met by cheering crowds and public accolades, including the Congressional Medal of Honor.

But what exactly were these crowds cheering?

In part, they perceived Byrd’s feat as evidence of America’s technological progress and as a symbol of their nation’s modernity.  Celebrating the mechanical triumph, however, also risked undercutting the heroic nature of exploration, particularly when the flight was compared to previous expeditions, which had produced images of intrepid fur-clad explorers battling their way across the dangerous polar ice.  By lifting the explorer high above the ice and shielding him within the body of a machine that carried him towards the pole, the airplane seemed to make the process far too easy to be considered heroic.  Much as it jeopardized the explorer’s heroic status, the airplane also threatened to domesticate the Arctic, thereby destroying its imaginative potential as a space for heroic adventure.  In particular, the use of aircraft seemed to shatter the Arctic’s image as a theoretically untouched wilderness cut off from the modern industrialized world.

How was it, then, that Byrd continued to be seen as an exceptional man, even when ensconced in the machine’s protective shell soaring high above the polar ice?  The process of creating a polar hero in this context was not straightforward and the result was not a single stable image.  This heterogeneity, however, offers a window into how Americans in the interwar period sought to reconcile a celebration of mechanical progress with ideas about heroic masculinity.

On the one hand, many narratives rehearsed various longstanding romantic images of polar exploration in order to buttress Byrd’s heroic status.  But, perhaps more interestingly, several of these narratives also reimagined the practice of exploration itself.  These accounts extended the landscape of exploration vertically, imagining the skies as a new field to explore.  By underscoring the dangers present in the Arctic atmosphere – its extreme temperatures, unpredictable weather, and unknown aerial currents – newspaper stories created a new environment that could test both the polar explorer and his machine.  Much as the deep oceans and space would emerge as new frontiers later in the century, in these accounts the air became a new wilderness for a modern society to explore.  These stories also drew on popular interwar images of aviation, which imagined it as a technology of wonder and grace that enabled aviators to escape the quotidian mundaneness of everyday life and to enter a new, transcendent world.  Thus, much like the polar explorers of earlier eras, the pilot became a daring pioneer who stepped into the unknown and was transformed into a heroic figure.

To remain a polar hero, however, Byrd needed to be more than a mere passenger on this aerial adventure.  Instead, his ability to control the machine, to bend its power to his will, became a key component of what it meant to be an aerial explorer.  In particular, coverage emphasized the flight’s mental challenges, specifically the intense concentration demanded by the mathematical calculations required to navigate over the polar ice.  Thus, aerial exploration became as much a mental as a physical challenge.  By demonstrating the mental ability necessary to control the machine, Byrd acquired the power to penetrate previously inaccessible areas, to see further than terrestrial explorers, and therefore to pierce the Arctic’s secrets.  At the same time, risks from technology itself, in the form of mechanical failures, offered a new set of hazards for the technological explorer to overcome.  The technology itself thus became a site of exploration as the venture into new arenas tested both the explorer’s and the machine’s limits. The explorer’s willingness to brave these dangers and his ability to control the machine under difficult conditions became important signs of his heroic masculinity. 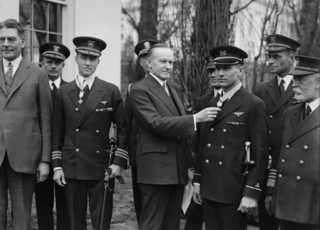 Through the newspaper stories covering Byrd’s flight, we can see their authors exploring the question of how to successfully incorporate the machine into exploration narratives without abandoning the hero’s central place.  By reimagining the nature of exploration and reconceiving of the air as a new frontier, these authors sought to create an image of heroic exploration that could accommodate the presence of the machine.  In doing so they articulated a vision of the technological explorer that would influence later depictions of figures such as Charles Lindberg and the first astronauts, and would continue to influence perceptions of heroic masculinity across the 20th century.

Dr Marionne Cronin is a Postdoctoral Research Fellow in the Northern Colonialism Programme at the University of Aberdeen, where her research investigates the place of technology in the culture of polar exploration. She is currently working on a book examining how interwar polar explorers’ use of new technologies – particularly airplanes – was incorporated into popular images of heroic exploration, masculinity, and modernity. She will be an Eccles Centre Visiting Fellow in North American Studies in June-August 2015.

If you want to learn more about science in extreme environments you can watch the video of our recent TalkScience event here.