From fiction to fact: the science of Animal Tales

Alice Kirke investigates the facts behind the fiction of the British Library’s Animal Tales exhibition.

The Animal Tales exhibition at the British Library explores what our portrayal of animals within literature tells us about ourselves. The natural environment and its inhabitants have inspired generations of writers, but how do some of our favourite, anthropomorphised fictional creatures compare to their real-life counterparts? I set out to discover what the science says about the creatures lurking among the pages.

Valued for their companionship, skill in hunting vermin, and role in numerous ‘funny cat videos’ on YouTube, the domestic cat was first classified as ‘Felis catus’ by the Swedish botanist and zoologist Carolus Linnaeus in 1758. The exhibition features French philosopher Michel de Montaigne’s Essays,[1] in which he famously asked ‘When I am playing with my cat, how do I know she is not playing with me?’ People have kept cats as pets for thousands of years. Though they are commonly thought to have first been domesticated by the Ancient Egyptians, who considered them to be sacred, there is evidence of earlier domestication dating from around 9,500 years ago.[2] There are many theories and misconceptions about the behaviour of these enigmatic pets. As predators, cats are very focussed on their environment leading to the common misreading of their behaviour as aloof, and although they are seen as ‘independent’ they are in fact social animals. Cat communication includes a variety of vocalizations as well types of cat-specific body language.[3] 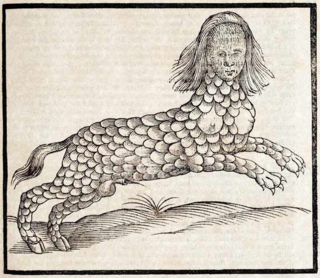 A 17th century depiction of Lamia from Edward Topsell's The History of Four-Footed Beasts L.R.301.cc.3.

Snakes have a sinister reputation in literature and culture. In ancient Greek mythology Lamia, the mistress of Zeus was transformed into a terrifying serpentine demon by Zeus’ jealous wife Hera. In Keats’ poem Lamia[4], displayed in the exhibition, the protagonist appears in her beautiful human form before being transformed back into a serpent at her wedding feast. To an extent, this was a comment on science itself; knowledge of the natural world destroyed its beauty.

Snakes are perhaps so often portrayed as evil in literature because some species are dangerous to humans, but snakes are diverse creatures- there are over 3,000 species of snake in the world, with at least one type of snake on every continent except Antarctica. There is debate among evolutionary psychologists over whether the fear of snakes is innate. Since those with a phobia of snakes would be more likely to stay away from them and avoid the dangers of being bitten, they had a better chance of surviving and passing on their genes. Recent research suggests that although the fear of snakes is a learned behaviour, people do have a knack for spotting them; when shown images of snakes surrounded by objects of a similar colour babies and young children detected snakes faster than other objects.

Frequent scare stories in the UK press about invasions of deadly spiders prey on a common fear of arachnids. There are over 40,000 different species worldwide, and although the vast majority are venomous most are not dangerous to humans. Arachnologists, experts who study spiders emphasise their diversity in terms of their appearance, habitats and behaviour.

Due to their wide range of behaviours, they have become symbolic of various attributes, including patience, cruelty and creativity in art and mythology.  The character of Anansi, a spider who often acts and appears as a man in West African and Caribbean folklore, has taken on a variety of different traits over time. Anansi Company,[5] featured in the exhibition, is a modern version of tales about Anansi and his friends which are central to Caribbean culture. 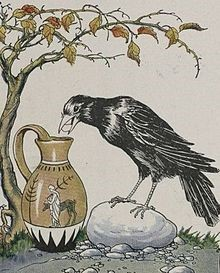 The Crow and the Pitcher, illustrated by Milo Winter in 1919

In common English, corvids including crows, ravens, rooks, jackdaws, jays and magpies, are all known as ‘the crow family’.  Ted Hughes’ Crow draws on mythology surrounding the much maligned creature, which is often connected with death.[6] In Irish mythology, crows are associated with Morrigan, the goddess of war and death, and the collective name for a group of crows is a ‘murder’. However, they have also been linked with prophesy, cunning and intelligence. In one of Aesop’s fables, a thirsty crow spied a pitcher containing a small amount of water, which was out of reach of its bill. The crow began dropping pebbles into the pitcher one by one, thereby raising the level of water and enabling it to drink. A 2009 study published in Current Biology which replicated Aesop's fable, found that four captive rooks used stones to raise the level of water in a container, allowing a floating worm to move into reach, showing that the goal-directed behaviour of Aseop’s crow is reflected in actual corvid behaviour. European magpies have demonstrated self-awareness in mirror tests, and crows and rooks have been shown to have the ability to make and use tools, previously regarded as a skill specific to humans and a few other higher mammals. This scientific research suggests that crows are one of the most intelligent animals in the world.

Animal Tales showcases many more familiar yet enigmatic creatures. The wealth of material in the Library collections can be used to trace animals in literature as well as the latest scientific research about their characteristics- come and see the exhibition and follow up with some research into your favourite fictional beasts!

Posted by The Science Team at 5:23 PM

Really awesome pieces in this exhibition!