In honour of British Science Week Jonathan Pledge explores the work of Donald Michie, a code-breaker at Bletchley Park from 1942 to 1945. The Donald Michie papers are held at the British Library.

Donald Michie (1923-2007) was a scientist who made key contributions in the fields of cryptography, mammalian genetics and artificial intelligence (AI). 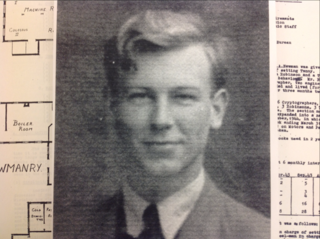 In 1942, Michie began working at Bletchley Park in Buckinghamshire as a code-breaker under Max H. A. Newman. His role was to decrypt the German Lorenz teleprinter cypher - codenamed ‘Tunny’.

The Tunny machine was attached to a teleprinter and encoded messages via a system of two sets of five rotating wheels, named ‘psi’ and ‘chi’, by the code-breakers. The starting position of the wheels, known as a wheel pattern, was decided by a predetermined code before the operator entered the message. The encryption worked by generating an additional letter, derived from the addition of each letter generated by the psi and chi wheels to each letter of the unencrypted message entered by the operator. The addition worked by using a simple rule represented here as dots and crosses: 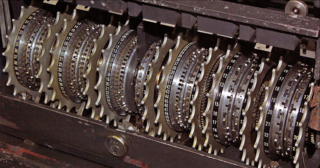 In order for messages to be decrypted it was initially necessary to know the position of the encoding wheels before the message was sent. These were initially established by the use of ‘depths’. A depth occurred when the Tunny operator mistakenly repeated the same message with subtle textual differences without first resetting the encoding wheels.

A depth was first intercepted on 30 August 1941 and the encoding text was deciphered by John Tiltman. From this the working details of Tunny were established by the mathematician William Tutte without his ever having seen the machine itself; an astonishing feat. Using Tutte’s deduction the mathematician Alan Turing came up with a system for devising the wheel patterns; known as ‘Turingery’.

Turing, known today for his role in breaking the German navy’s ‘Enigma ‘code, was at the time best known for his 1936 paper ‘On Computable Numbers’ in which he had theorised about a ‘Universal Turing Machine’ which today we would recognise as a computer. Turing’s ideas on ‘intelligent machines’, along with his friendship, were to have a lasting effect on Michie and his future career in AI and robotics.

Between July and October 1942, all German Tunny messages were decrypted by hand. However changes to the way the cypher was generated meant that finding the wheel setting by hand was no longer feasible. It was again William Tutte who came up with a statistical method for finding the wheels settings and it was the mathematician Max Newman who suggested using a machine for processing the data. 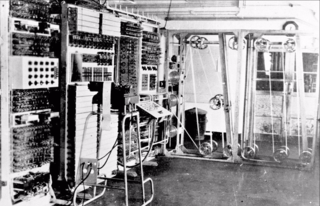 Colossus computer [c 1944]. By the end of the War there were ten such machines at Bletchley. Crown Copyright.

Initially an electronic counter dubbed ‘Heath Robinson’ was used for data processing. However it was not until the engineer Thomas Flowers, designed and built Colossus, the world’s first large scale electronic computer, that wheel patterns and therefore the messages could be decrypted at speed. Michie too, along with Jack Good, played a part, discovering a way of using Colossus to dramatically reduce the processing time for ciphered texts.

One of the great ironies is that much of this pioneering and critical work remained a state secret until 1996. It was only through Donald Michie’s tireless campaigning that the General Report on Tunny, written in 1945 by Michie, Jack Good and Geoffrey Timmins, was finally declassified by the British Government; providing proof of the code-breakers collective achievements during the War. 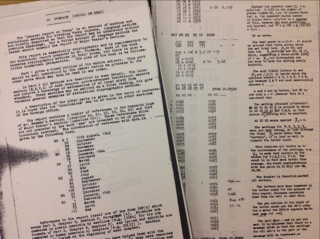 Donald Michie at the British Library

The Donald Michie Papers at the British Library comprises of three separate tranches of material gifted to the library in 2004 and 2007. They consist of correspondence, notes, notebooks, offprints and photographs and are available to researchers through the British Library’s Explore Archives and Manuscripts catalogue at Add MS 88958, Add MS 88975 and Add MS 89072.

Posted by The Science Team at 2:42 PM

Excellent article - Donald Michie went on to found the Turing Institute in the 1980s.