The Thinking Machine: W Ross Ashby and the Homeostat

The British Library holds the personal archive of W. Ross Ashby - psychiatrist and expert in cybernetics (the study of the control of systems using technology). In this guest post Hallvard Haug, postdoctoral fellow at Birkbeck, University of London, examines the figure of W. Ross Ashby and his key invention the homeostat - a machine capable of adapting itself to the environment. A shorter article on W. Ross Ashby is featured on the British Library Untold Lives blog.

Ross Ashby (1903-1972) was a central figure of the post-war cybernetics movement in the UK, especially due to the popularity of his books Design for a Brain (1952) and  An Introduction to Cybernetics (1956). Ashby kept a thorough record of his thoughts throughout his adult life, and a collection of his papers has been donated to the British Library by his family. 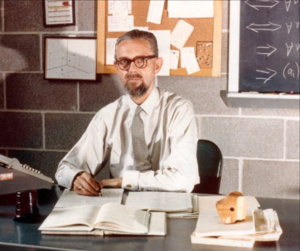 The centrepiece of the collection is Ashby’s notebooks which he kept from 1928 up until the year of his death. Among students of cybernetics these are legendary, and for good reason. Over the course of nearly 50 years, Ashby took meticulous stock of his thoughts on the material nature of the brain, and the notebooks show the workings of a highly systematic and deeply creative mind. Written in a precise hand, the journals brim with insights, speculations, calculations, graphs, drawings, newspaper clippings and circuit diagrams. Ashby also kept a meticulous topical record complete with content pages, cross referencing, summaries of entries, as well as two different sets of indexes — also included in the collection (Add MS 89153/27-30). Eventually, the notebooks ran to 7189 pages and spanned a total of 25 volumes. 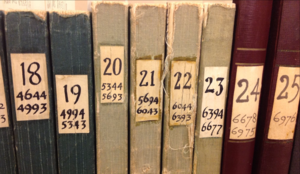 At first, the notebooks were a pastime; eventually, however, the ideas Ashby explored became original enough to be publishable and in time these notes became the focus of his working life as his cybernetics work. The most famous of his innovations was the homeostat, a machine which demonstrated and embodied his theory of learning and adaptation in a mechanical apparatus which, entirely on its own, regains stability when perturbed. The development of the homeostat is documented thoroughly in the notebooks, from its first entry on 19 November 1946:

"I have been trying to develope [sic] further principles for my machine to illustrate stability, + to develope ultrastability" (Add MS 89153/9).

In the coming years, it was the centrepiece for his cybernetic activities.

The homeostat — a bulky and somewhat baroque machine built from military surplus parts — had a single purpose: to regain stability in response to perturbations in its environment. It is hard to convey precisely how the homeostat worked: set up as four identical units connected to each other via electrical inputs and outputs, each unit was topped with electrically conducing vanes dipped in water troughs. Like oscillographs, the vanes moved back and forth in the trough, reacting to the electrical input from their environment — the output from other blocks in the setup — and each block had an electrical output determined by the position of the vane in the trough. If the vane was directly in the middle of the trough, the electrical output was zero; if, however, it was positioned any other place in the trough, it provided electrical output to the other blocks, affecting the positions of the vanes it was connected to. Thus, when the machine was set in action by pushing a vane out of position, the vanes on all four units would react by moving back and forth, in reaction to their respective environments. 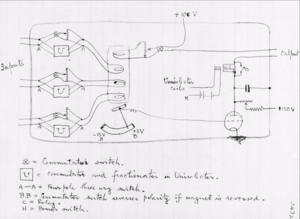 Image of Ashby’s hand drawn diagram for the final version of the Homeostat from page 2432, Journal 11. (

What made the homeostat so interesting, however, was its ability to return to equilibrium once a vane had been upset. Each of the units was constructed to also produce electric feedback to their respective vanes, depending on the conductivity of the vane. This feedback was determined according to a random table, and the machine would cycle through the table as long as the electrical output was not zero. Eventually, however, the vanes, cycling through random states, would come to a halt as each block found the appropriate feedback configuration. For Ashby, the return to equilibrium that the homeostat demonstrated was equivalent to the brain’s — whether human or animal — capacity for learning. The return to equilibrium demonstrated by the homeostat also showed how what only seems purposeful can come about by randomness, and Ashby believed this principle of feedback mechanisms spontaneously restoring equilibrium was a governing principle in nature. Indeed, in 1945 he noted that he had decided to follow in Darwin’s footsteps: like with the homeostat’s return to equilibrium, he viewed a species’ evolutionary adaptation to its environment as a return to equilibrium, and is only apparently purposeful. This tendency towards what Ashby called ‘ultrastability’ was referred to by Norbert Wiener as no less than ‘one of the great philosophical contributions of the present day.’ Eventually, Ashby was invited to present it at the ninth Macy conference for cybernetics in 1952. 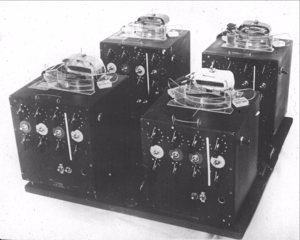 Image of the Homeostat taken from Ashby’s lecture slides. (

The influence cybernetics exerted on both the sciences and humanities in the 1950s and ’60s was considerable: its central insights touched upon, transformed and occasionally dominated disciplines ranging from computer science, artificial intelligence and genetics through psychology and sociology, and also influenced intellectual movements such as structuralism. Its universal character gained it great popular appeal, but also meant cybernetics never had a comfortable institutional or disciplinary home, with only a few university departments dedicated to it. Despite its popular appeal, Ashby has remained something of an obscure figure. The autobiographical notebook ‘Passing through nature…’ gives a rare insight into his private thoughts, and suggests that it was at least partly due to Ashby’s reticence towards being in the public eye:

"My fear is now that that [sic] I may become conspicuous for a book of mine is in the press. For this sort of success I have no liking. My ambitions are vaguer.

I am something of an artist, not with pencil or paint, for I have no skill there, but with a deep appreciation of the perfect. […] I have an ambition some day to produce something faultless." (Add MS 89153/33)

Against his inclinations, Ashby set out to spark public interest in his ideas in the 1940s, and for a brief period the homeostat was the topic both of popular magazines and radio shows, promoted as an ‘artificial brain.’ Ashby kept a record of his success, pasting newspaper clippings in the notebooks. The journals are a treasure trove for insight into the trajectory of ideas: from the premature attempts at precisely stating a problem, to the mature implementation, years later, of a successful theory and its subsequent dissemination.

Hallvard Haug is a Wellcome ISSF postdoctoral fellow at the Centre for Medical Humanities at Birkbeck, University of London. His interest in W. Ross Ashby stems from his PhD research on the history of human enhancement technologies, which included a section on cybernetics.

The British Library acquired the W. Ross Ashby archive in 2003. It consists of notebooks, correspondence, notes, index cards, slides and offprints and is available to researchers through the British Library Explore Archives and Manuscripts catalogue at Add MS 89153. The estate of W. Ross Ashby also maintains a website The W. Ross Ashby Digital Archive which contains digitised copies of much of this material as well as a biography and photographs. It can be found at www.rossashby.info

Andrew Pickering, The Cybernetic Brain: Sketches for Another Future (Chicago: 2010).

Posted by The Science Team at 8:30 AM