“Like light shining in a dark place”: Florence Nightingale and William Farr

On the anniversary of Florence Nightingale’s death, Katie Howe explores her scientific legacy.

Perhaps best known as ‘the lady with the lamp’ Florence Nightingale was also an accomplished scientist and social reformer.

In 1854, with Britain in the midst of the Crimean conflict, Nightingale was appointed to lead a party of nurses to a military hospital in Scutari (in modern day Istanbul). When she arrived she discovered a lack of coordination between hospitals and no standardised or consistent reporting of mortality rates and causes of death. Nightingale set to work gathering extensive information on all aspects of hospital care.

After returning from the Crimea, Nightingale used her new found celebrity status and personal connections to enlist the help of the eminent Victorian epidemiologist and statistician William Farr in analysing the vast quantities of data she had collected.

Their correspondence, which is held at the British Library, reveals a respectful professional relationship, with Farr often signing off,

“I have the honour to be your very faithful servant.”

In May 1857, when Nightingale sent Farr the death rates calculated from her Crimean war data, he replied,

“Dear Miss Nightingale. I have read with much profit your admirable observations. It is like light shining in a dark place. You must when you have completed your task - give some preliminary explanation - for the sake of the ignorant reader.” (Add MS 43398 f.10) 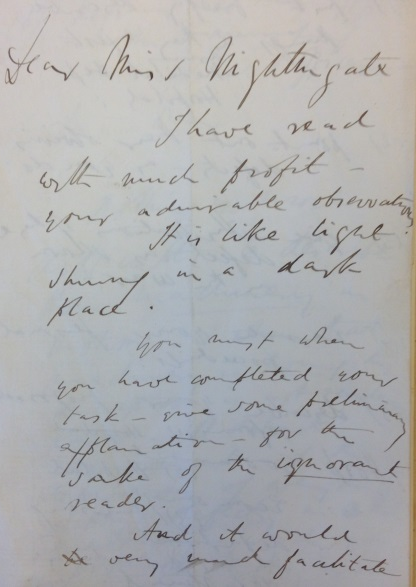 So Florence Nightingale was not only the literal ‘lady with the lamp’, but her statistical work also illuminated worrying trends in army mortality rates.

After receiving further data from Nightingale in November the same year, Farr wrote: 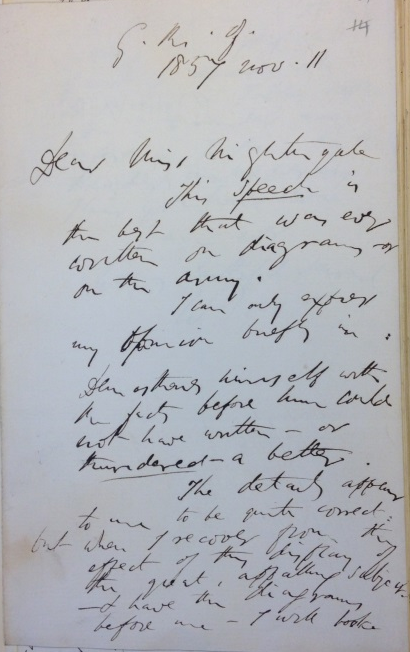 As a result of this productive collaboration with Farr, Nightingale learned that the majority of deaths in the Crimean War were not due to battle wounds but to preventable diseases like typhus and cholera.

To get this important message across to high-ranking government officials who had no statistical training, Nightingale knew she needed a powerful visual message. She represented the cause of death in a revolutionary new way. Rather than using a table or list as was common at the time she created this striking rose diagram.

Each of the 12 wedges represents a month of the year and changes in the wedges’ colour reveal changes over time. At a glance it was easy to see the deaths from epidemic diseases (blue) far outweighed deaths from battlefield wounds (red) and deaths from other causes such as accidents or frostbite (black).  After sanitary reforms such as the introduction of basic sanitation, hand washing and ventilation, deaths dropped dramatically. Compare the right rose (April 1854-March 1855) with left rose (April 1855-March 1856). 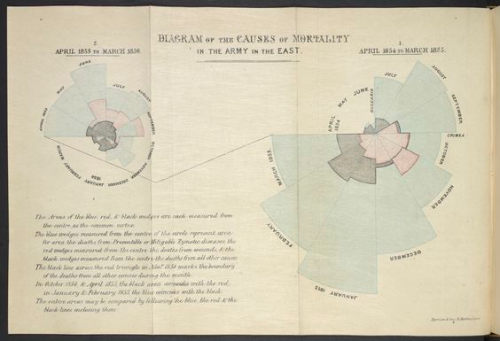 Her rose diagram was so easy to understand it was widely republished. Ultimately this striking visualisation and the accompanying report convinced the government that deaths were preventable if sanitation reforms were implemented in military hospitals. Nightingale’s work provided a catalyst for change, driving better and cleaner hospitals and the establishment of a new army statistics department to improve healthcare.

Posted by The Science Team at 5:04 PM