On 22nd October 1814, Joseph Constantine Carpue (1764-1846) performed the first plastic surgery operation in Britain, reconstructing the nose of an army officer whose nose had collapsed due to long-term mercury treatments for a liver complaint. The operation lasted fifteen minutes, with no anaesthetic. Three days later, the patient’s dressing was removed, and on observing the successful results a friend of the patient exclaimed: “My God, there is a nose!” 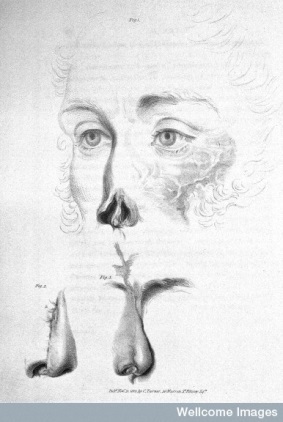 Illustration by Charles Turner from Carpue’s book, digitised by the Wellcome Library and released under Creative Commons CC BY 4.0 licence.

Carpue was inspired to perform the operation after reading reports of successful nasal reconstructions in India, using skin flaps from the cheek or forehead. The most famous of these was a 1794 report in the Gentleman’s Magazine, describing the reconstruction of the nose of a man named Cowasjee. Cowasjee had been mutilated by the forces of Tipu Sultan during the Third Anglo-Mysore War for working for the British. 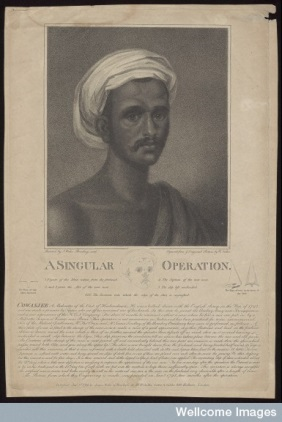 Cowasjee’s case published by James Wales, digitised by the Wellcome Library and released under CC BY 4.0 licence.

Nasal reconstructions had been practised as a relatively routine procedure in India for centuries. This was driven by the common use of nasal mutilation in India as a means of punishment or private vengeance for various forms of immorality. The procedures are described in two well-known early Indian medical works, the Suśruta Saṃhitā, thought to date to the middle of the first millennium BCE, and the Aṣṭāṅgahṛdayasaṃhitā, believed to date from the sixth century CE*.  By the nineteenth century the technique had been handed down through separate families in three different parts of India.

Rhinoplasty by transfer of skin flaps from other body parts had also been practiced in Italy in the sixteenth century, most famously by the Bolognese surgeon Gaspare Tagliacozzi (1545-1599). The Indian technique probably spread to Italy via Arabic scholarship - it is probable that the Suśruta Saṃhitā was translated into Arabic in the later 8th century CE on the orders of the Vizier Yahya ibn Khalid. However, it had declined following Tagliacozzi’s death, due to a mixture of professional politics in Italy, misconceptions about the nature of the procedure, and moral disapproval of an operation that was often performed to repair damage done by syphilis. (Even in his own book, Carpue felt at pains to insist that the mercuric treatment that had damaged his first patient’s nose was not for syphilis.)

Carpue published a book in 1816 on the subject, discussing his predecessors and inspiration and then describing two cases of nasal reconstruction that he had performed. The second was on a named patient, a Captain Latham whose nose had been injured during the Battle of Almuera, in the Peninsular War. Carpue’s work inspired further practice by the German surgeon Carl Ferdinand von Gräfe, who is credited with coining the term “plastic surgery”.

With thanks to Pasquale Manzo (Curator, Sanskrit Collections) for information on British Library holdings of ancient Indian medical texts.