PhD placement student Mandy Kleinsorge looks back on our most recent TalkScience@BL event.

The use of animals in research is as controversial as ever. It is well-known that animal research has brought about some great discoveries in the past1, such as the development of Herceptin and Tamoxifen for the treatment of breast cancer or the discovery of bronchodilators to treat the symptoms of asthma. Today, the UK regulations for research involving animals are among the tightest in the world. In consequence, it is illegal in the UK (and in Europe) to use an animal in research if there is a viable non-animal alternative2. Despite this, the number of experimental procedures on animals in the UK has been steadily increasing over the last years3 and funding of non-animal research accounted for only 0.036 % of the UK national R&D science expenditure4 (2011). Apparently, three quarters of Britons agreed that there needs to be more research carried out into alternatives to animal experimentation5 (2012).

On 13th October, we invited experts in the field to the British Library to publicly discuss the current state of alternatives to animals, as well as the efforts that are made to improve the welfare of animals that are still needed in scientific research. The concept of reducing or even substituting animals in scientific experiments (or at least improving the conditions under which these experiments are conducted) is not new. In 1959, Russell and Burch established the principles of the Three Rs (Replacement, Reduction and Refinement)6 which came to be EU-wide guidelines for the more ethical use – or non-use – of animals in research. Today, a number of organisations campaign for openness and education as to why animals are needed in some areas of research, but also as to where we might not actually need them anymore. One of those is the National Centre for the Replacement, Refinement & Reduction of Animals in Research (NC3Rs) who we collaborated with on our TalkScience event ‘Replace, Reduce, Refine: Animals in Research’. The event was chaired by Stephen Holgate, Professor of Medicine at the University of Southampton and Board Chair of the NC3Rs. 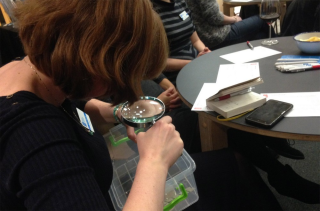 The first speaker of the evening was Robin Williams (Head of the Biomedical Sciences Centre at Royal Holloway, University of London). Robin uses Dictyostelium, a social amoeba and therefore non-animal model, to conduct research into neurological diseases like Alzheimer’s. He even brought some amoeba for the audience to look at! Besides bringing awareness to the fact that this organism can actually represent a viable alternative to animal experimentation, he also drew attention to two big problems that researchers using animal alternatives are facing. Acquiring funding and publishing scientific papers are the most important tasks of senior researchers and both of these are complicated by a limited acceptance of non-animal models. Although 3Rs practice is increasingly advocated in the UK, the peer review process regulating funding and publication of research projects is a global endeavour. Robin therefore called for a shift in attitude towards alternatives to animals on a world-wide level.

Our second speaker, Sally Robinson (Head of Laboratory Animal Science UK at AstraZeneca), shed some light into the use of animals in pharmaceutical research. Sally stressed the importance of using the most appropriate model – animal or non-animal – to answer the scientific question. This is not as trivial as it sounds, and is key to obtaining meaningful results and minimising use of animals where possible. The welfare of the animals used in drug development is equally important, as Sally illustrated with the refinement of dog housing. By optimising pen design7, the welfare of laboratory dogs can be drastically improved, and so can the quality of scientific research they’re involved in. Furthermore, Sally herself had a leading role in the challenging of the regulatory requirement for acute toxicity tests in drug development8, which ultimately changed international legislative guidance and reduced the number of animals needed in pharmaceutical research. 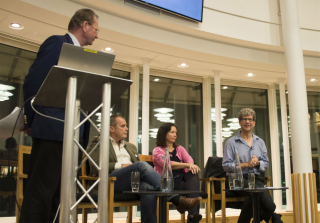 Our last speaker was Robin Lovell-Badge (Head of the Division of Stem Cell Biology and Developmental Genetics at the Francis Crick Institute). He opened his talk by endorsing openness in animal research. This is a welcome and necessary trend of the past few years – after animal research had been conducted behind closed doors in the UK for decades for fear of violent actions. The ‘Concordat on Openness on Animal Research’9 was initiated in 2012 and has been signed by 107 UK organisations to date. Robin explained which animals the newly built Francis Crick Institute will work with and why, and how Home Office guidelines on animal research have helped inform the design of their state-of-the-art facilities. He also mentioned some of their work that doesn’t involve animals, like research using induced pluripotent stem (iPS) cells. These iPS cells resemble embryonic stem cells and can be generated from any living cell of a human donor. They are able to differentiate into virtually every cell type of the body, presenting an alternative source of human tissue for drug screenings and the modelling of diseases10. This fairly new technology might even be useful as an alternative to animal experiments in the future.

In discussion with the audience it became clear that the UK is leading the world in the realisation of the 3Rs. However, there is still room for much improvement in furthering the 3Rs. While better experimental design using robust biostatistics and in-depth training of scientists handling animals is vital, increased acceptance of negative data would avoid unnecessary duplication of experiments using animals. 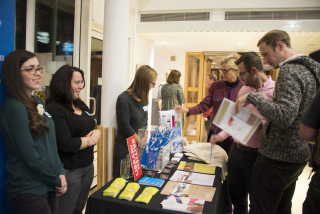 The discussion continued after the event.

When asked whether an animal-free research in the immediate future was possible, the panel agreed that it wasn’t. A lot more research into alternatives as well as a change in people’s mindsets is needed beforehand. But how do we exert pressure for this change? Do we need animal activists to do this, one audience member asked. Good question. It is definitely necessary to bring different types of people together to have more balanced and open discussions about this emotive topic. So, thanks to the speakers and the audience of this TalkScience event for joining us to disuss this important issue.