In the final episode of “Treasures of the British Library” series (tonight at 9pm on Sky Arts) we explored the ancestry of trumpeter Alison Balsom. Alison is descended from the 18th century clergyman and polymath Stephen Hales (1677-1761) and she was keen to find out more about this remarkable man.

The first item I showed Alison was Hales’ seminal work “Vegetable Staticks” or to give it its full title “Vegetable Staticks: or an account of some statical experiments on the sap in vegetables: being an essay towards a natural history of vegetation”. Alas, it was not an age of punchy titles. Hales was interested in understanding how plants give off and take up water and in this book he outlines the many meticulous experiments that seek to understand these processes. Hales even invented the ‘pneumatic trough’ (see below) and used this to collect gases given off by plants. He didn’t however analyse the composition of this gas, since at that time air was understood to be a pure element. It was not until many years later that Joseph Priestley and Antoine Lavoisier discovered oxygen was a component of air, making use of Hales’ pneumatic trough to collect, analyse and separate gases. 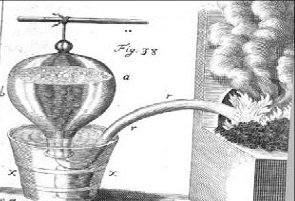 Some of Hales’ conclusions were remarkably prescient outlining the process of photosynthesis many years before its chemical basis was elucidated. One key quote draws parallels between the function of the leaves of plants with animals' lungs.

Two pages later Hales also postulates that light might be a form of energy which is needed by the plant to survive. 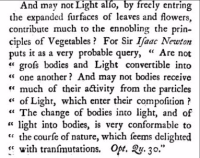 Alison and I then went on to look at Hales’ “A Description of Ventilators”. One of Hale’s social projects was the invention of ventilating systems for ships and prisons where overcrowding meant that stale air and unhygienic conditions were rife. Hales’ invention was essentially a giant set of bellows which removed the noxious air. The ventilator was initially used to dry grain for preservation but was eventually rolled out to ships, hospitals and prisons where it saved many lives. 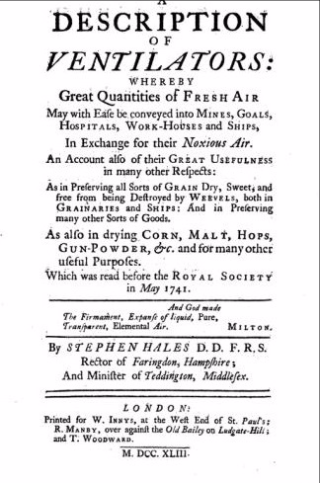 Stephen Hales. A Description Of Ventilators

Last but not least we came to Reverend Hales’ “A Friendly Admonition to Drinkers of Gin, Brandy and Other Spirituous liquors” which was published anonymously in 1751. Hales was a strong supporter of the Gin Acts of the early 18th century where gin sales were subject to high taxes in an effort to reduce consumption. In the tract he outlines the many physiological consequences of consuming as he called them, “most intoxicating and baneful spirits”. Readers are warned that liquors ‘frequently cause those Obstructions and Stoppages in the Liver, which occasion the Jaundice, Dropsy and many other fatal diseases” and “impair the mind as much as the body”.  However the message was as much moral as it was medical with Hales condemning drunkards and the great sin of drinking throughout. 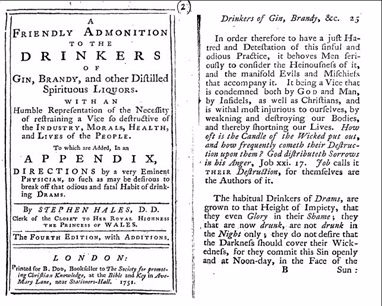 Although Hales trained as a clergyman and did not have any formal scientific training his achievements rival many of the well-known scientists of the day. Despite this Hales does not tend to feature alongside famous scientists in the history books so we were pleased to be able to shed some light on this interesting character as part of the Treasures of the British Library series.

With thanks to Tanya Kirk and Duncan Heyes for help sourcing Stephen Hales material from the British Library collections.

Posted by The Science Team at 5:41 PM