9 famous scientists and their PhD theses

If you are currently working towards a PhD you might worry that your thesis is destined for life as a handy doorstop, or to gather dust on a forgotten Library shelf. But this work can be a stepping stone - either to a career in academia or something else altogether. With this in mind we decided to check out the British Library’s electronic theses service EThOS to see what treasures we could unearth from influential scientists while they were lowly graduate students.

From 1970-1974 Brian May, Queen’s famous guitarist, studied for a PhD investigating interplanetary dust in the solar system. He abandoned his studies when Queen started to have international success. Many years later he returned to Imperial to complete his PhD studies. His final thesis was awarded in 2008 and was entitled A survey of radial velocities in the zodiacal dust cloud. 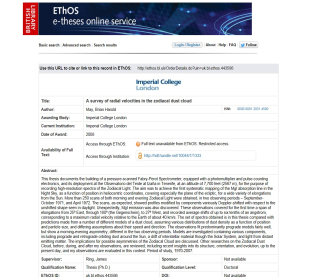 Peter Higgs, who shot to fame in 2013 after his discovery of the Higgs Boson (or God particle) was honoured with the Nobel prize in Physics, started his scientific career studying for a PhD - mysteriously entitled “Some problems in the theory of molecular vibrations”.

D-Ream singer turned astrophysicist Brian Cox started his academic career with a PhD studying in high energy particle physics at the University of Manchester. Things could only get better from there... (sorry!) Rosalind Franklin is famous for producing the X-ray diffraction images of DNA that led to the discovery of its double helical structure. Her PhD research focussed on the molecular structure of coal and other organic materials.

Jocelyn Bell Burnell discovered radio pulsars while studying for a PhD at the University of Cambridge in the 1960s.  A visualisation of one of these pulsars was famously used as the cover art for Joy Division's best-selling album Unknown Pleasures. 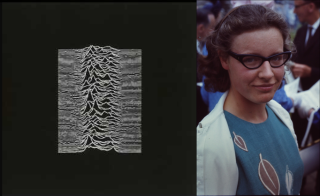 Theoretical physicist Stephen Hawking obtained his PhD from the University of Cambridge in 1966 after being diagnosed with motor neurone disease in 1963.  His PhD thesis, properties of expanding universes describes his theory for the creation of the universe and was inspired by Roger Penrose's work on space time singularities.

Sir Mark Walport investigated the “biology of complement receptors” for his PhD at the University of Cambridge. Complement receptors are key part of our immune system and are responsible for the detection of pathogens. He now serves the lofty position of Chief Scientific Advisor to the UK Government is former director of the biomedical research funder the Wellcome Trust.

Sir Paul Nurse is now President of the Royal Society and Director of the Francis Crick Institute. His PhD at the University of East Anglia investigated the organisation of amino acids in a species of yeast called Candia Utitlis.  Nurse continued to work on yeast after his PhD and in 1976 discovered the molecules which control the cell cycle in fission yeast. This discovery was honoured with the Nobel Prize in Physiology or Medicine in 2001.