Philip recently attended an event for other Oxford University chemistry alumni, and one of the speakers drew attention to a recent publication from, among others, Oxford chemists, regarding the production of hydrogen from paraffin waxes by microwave degradation using a ruthenium catalyst.

Hydrogen has often been suggested as an environmentally-friendly replacement energy source for fossil fuels in transport vehicles and other applications requiring high energy density. (Note that hydrogen is not a “fuel”, as it must be made using energy from other sources, which can be environmentally-friendly or not.) However, there are significant problems with this, notably involving the safe storage of a highly-inflammable and explosive gas which is much lighter than air. 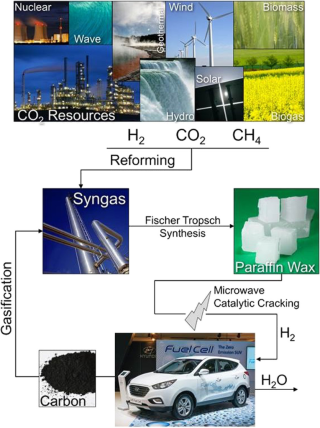 This publication suggests that wax could be carried on vehicles and used to create hydrogen gas in situ, the waste carbon being used to make more wax via syngas production and the Fischer-Tropsch process, where carbon monoxide and hydrogen is converted into hydrocarbons as a potential source of petro-chemicals that does not involve releasing fossil carbon into the atmosphere. While this publication is still a long way from a working industrial-scale process, it offers a very hopeful potential avenue for less-polluting technology.

Posted by The Science Team at 1:05 PM