Following the birth of the world’s first baby by In Vitro Fertilisation (IVF), Louise Brown, in 1978, the research on human embryos that had made this possible became the subject of scrutiny and unease from both the public and politicians. This led the government to task Dame Mary Warnock with the chairing of a committee consisting of medics, social workers, lawyers and clerics in 1982, to set out a guideline for the legislation on IVF and embryo research in the UK. The report was enacted in the 1990 Human Fertilisation and Embryology Act. One of the report’s most lasting and controversial recommendations was a limit on research on human embryos in vitro beyond fourteen-days – the so-called ’fourteen-day rule’. 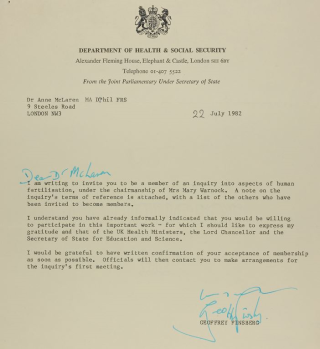 Detail of the letter to Anne McLaren inviting her to take part in the Warnock Committee. (1982). (Add MS 89202/8/1). Crown Copyright/estate of Anne McLaren.

This law has been in force for more than twenty-five years. For scientists, there had been no need to contest it, since scientists had not come close to culturing an embryo anywhere near to the fourteen-day limit. The equilibrium was only disrupted at the end of last year, when a research group at Cambridge University led by Magdalena Zernicka-Goetz claimed to have developed a method of culturing live human embryos for thirteen days, only stopping their experiment at this point to comply with the fourteen-day rule. This possibility has recharged the debates over the desirability of embryo research and the extent to which it should be regulated.

In the face of these reopened debates on the ethics of embryo research, it is important to understand the premises and arguments that shaped the current legislation. These arguments, at first glance, appear to be predominantly scientific.

Developmental biologist Dame Anne McLaren (1927-2007) was the only research scientist serving on the Warnock Committee, and played an important role in providing the lay-committee with a scientific understanding of the processes of embryo development that proved definitive in the committee’s efforts to convince ministers of the validity of the fourteen-day rule. McLaren made the case for the rule by arguing that the fourteenth day was a clearly distinguishable step towards individuation in the development of the embryo. Fourteen days, for example, sees the onset of gastrulation, a point at which the embryo can no longer divide into identical twins. Fourteen days also falls well before the beginnings of what will become the central nervous system, and so there is no chance that the embryo could experience pain. 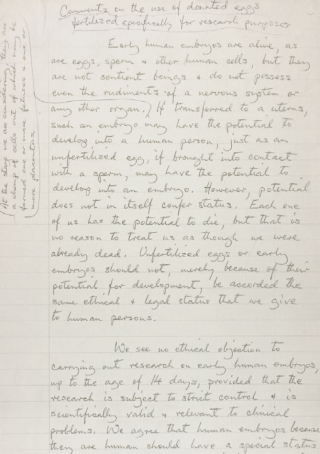 Title page of Anne McLaren’s draft for ‘Comments on the use of donated eggs fertlilized specifically for research purposes’. (c. 1982). (Add MS 89202/8/1) Copyright the estate of Anne McLaren.

Yet, as Lady Warnock has stressed, fourteen days is by no means a landmark set in stone. McLaren could have made a well-substantiated scientific argument for a different cut-off point- the embryo, for example, is just as incapable of experiencing pain at twenty-eight days. As Lady Warnock stated at a 2016 Progress Educational Trust conference on the topic, it was merely important to set a time limit, to provide clarity through law, so that the public would feel reassured that research would not progress untethered. The fourteen-day rule did therefore not express a moral distinction for the human embryo based on biological facts, but emphasised a specific part of the biological process in order to make a practical compromise – as Warnock writes in the committee’s report: ‘What is legally permissible may be thought of as the minimum requirement for a tolerable society’ (1985, p.3).

Understanding the arguments McLaren made in the 1980s will shed light on what is required of legislation today—that it should take into account the current political climate and public sentiment, perhaps before making arguments about the ethics of research based on biological facts.

Anne McLaren’s scientific publications and books, along with an oral history interview conducted in February 2007, are available to readers via the British Library Explore catalogue.

This post forms part of a series on our Science blog highlighting some of the British Library’s science collections as part of British Science Week 2017.

Posted by Marieke Bigg. Marieke is an MPhil student in sociology at the University of Cambridge and works under the supervision of Prof. Sarah Franklin. Marieke’s MPhil dissertation and PhD will both explore the contributions made by Dr Anne McLaren to the debate over human fertilisation and embryology in the 1980s.