The 100 most reported and shared science articles of 2016 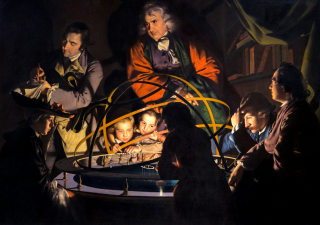 "A Philosopher Lecturing on the Orrery" by Joseph Wright of Derby. Since the 18th century, astronomy has remained popular among non-scientists.

Altmetric.com have recently published the list of the top 100 scholarly articles most mentioned in news and social media in 2016.  The subjects can be roughly assigned as:

Predictably, health and medicine articles were most of interest to the non-scholarly media, and social media, with many articles relating to high-profile issues such as obesity and the emergence of the Zika virus, or which could be considered to inspire "might someday lead to a cure for [condition]" stories. Environmental stories were unexpectedly low on the list. Two articles seemingly owed their popularity to a celebrity effect - President Obama's article on the Affordable Care Act, and an essay by the wife of the actor and comedian Robin Williams on the neurological problems that contributed to his suicide. Biology stories were dominated by ones on the always popular topic of prehistoric life, especially life that could be represented as particularly relevant to human ancestry.

However, a few articles hit the headlines after arousing interest specifically within the scientific community, notably the American Statistical Association's statement stepping into the "p-value" debate about the reliability and meaningfulness of statistical significance testing in science, and the announcement of the long-awaited conclusive detection of gravitational waves. Two stories about the scientific publishing process itself got into the top 100 - the New England Journal of Medicine's controversial "research parasite" editorial on data sharing and a BMJ satirical piece on the perennial battle between authors and peer reviewers.

So, what does this mean to us as scientific librarians? Most clearly, that at the extremes altmetrics are clearly dominated by what the general public is interested in rather than necessarily what is most important to the development of science. While we are always looking for new information to help us decide what to acquire, this list probably will not affect our purchasing much!