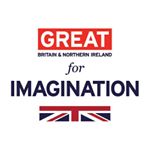 This week saw the launch of the GREATforImagination campaign, part of the GREAT Britain campaign to promote the UK as a place to buy from, invest in, and study in. GREATforImagination celebrates the 400th anniversary year of the publication of the first British patent to be retrospectively identified in the 19th century, after the foundation of the Patent Office (now the Intellectual Property Office), as a patent for an invention in the modern sense.

GREAT Britain asked us, as the holder's of Britain's historic patent collection, to come up with some key historical British patents for the different industries that they cover each week, which they'll be promoting one invention from per weekday as the campaign continues. We're tweeting each day with a link to the GREATforImagination release on each invention, and a link to the patent if it's available free online on Espacenet. The inventions are a mix of the historical ones and new ones from the cutting edge of British industrial innovation. The first week deals with clothing and cinema, and next week will cover technological developments from curiosity-driven science.

When GREAT Britain first asked us to start coming up with patents, we searched history books while they consulted industrial sources, to find inventions that were either a success at the time, or anticipated technologies that became important in the future once the world had caught up with them. There won't be any "weird patents" or "stupid patents" here, but ideas that stood the test of time.

Posted by The Science Team at 4:39 PM