A tribute to Anne McLaren 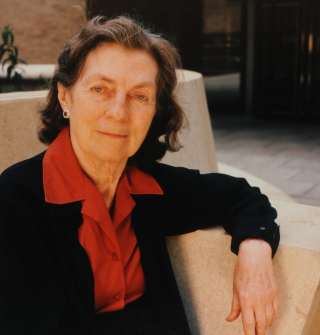 To publicise the upcoming event: Anne McLaren: Science, Ethics and the Archive, to be held at the British Library on 20 July, 6.30-8.00 pm, we present a guest-post by Professor Marilyn Monk, UCL Emeritus Professor of Molecular Embryology, with her personal recollections of Anne McLaren.

It is a great honour to have this opportunity to give my own personal tribute to Anne McLaren. Anne was my role model and my mentor over so many years. Not only in my scientific life - although her influence here was huge - but she was such a tower of strength and support for me over many difficult times. ‘Water under the bridge Marilyn. Water under the bridge’, she would say, encouraging me to move on.

I worked closely with Anne in her Medical Research Council Mammalian Development Unit for 18 years from 1974 to 1992 and I remained in contact with her thereafter. I would often email or phone Anne – ‘what do you think of this Anne?’ – questions about science, about life, about new ideas. And she would always respond with words of wisdom and support.

Right from the beginning Anne accepted me unconditionally. My first encounter with Anne was my phone call to her in Edinburgh in 1974. At that time, Anne was in Animal Genetics at Kings Buildings in Edinburgh and I was in the Molecular Biology Department working on DNA replication and repair in bacteria and on slime mould aggregation. But, in 1974, our MRC unit in Molecular Biology in Edinburgh closed with the retirement of our director, Bill Hayes. The MRC told me that I could relocate to another MRC unit that interested me and that would have me. I visited many MRC units and talked to various people who were encouraging but nothing seemed to be right for the interests and expertise in research I had at the time. Then Harry Harris at the Galton Laboratory suggested I contact Anne McLaren as she was just about to move from Edinburgh to London to start up a new MRC Mammalian Development Unit at the Galton. I knew nothing at all about development - let alone mammalian development. A move to mice and their embryos would be a huge leap both intellectually and technically.

In any case, I plucked up courage to phone Anne in Edinburgh in 1974. I remember everything about that moment when I phoned Anne because I was holding onto my last hopes of continuing as a scientist. I introduced myself, told her my problems, and asked her if she would consider taking me on in her new MRC Unit in London. I told her I knew nothing about mice – I had only worked with bacteria, viruses and amoebae. She said, ‘Yes of course you can join me. You must!’ I was flabbergasted. So overjoyed I could not speak. She did not even know me. She didn’t ask to meet me. But she had no reservations. She’d give me a chance. But this says it all about Anne - a tower of strength and support, particularly for women scientists (in my experience, it can still be difficult, even today to be a woman in science).

But as well as being a tower of strength, Anne was patient, tolerant, allowing, and very wise. And of course - very intelligent. I would prefer to talk about science and life and new ideas with Anne than anyone else I know. And Anne was a great listener. She always liked my ‘What if’ ideas and 'Why' questions. She thought that some of them were 'whacky' (her word) but always interesting.

Another great quality of Anne’s was her wicked sense of humour and sense of fun. Over the years, she would only have to raise one eyebrow in my direction over some happening, or strange remark from an unsuspecting visitor, and it would be difficult for me not to collapse in giggles. I always knew what she meant by the raised eyebrow. I felt privileged to be a secret accomplice to the raised eyebrow.

I know there are so many others who will have had the same wonderful experiences of Anne and will be feeling the way that I do. In the days and weeks after Anne died, so many people shared that they had just been in touch with her about this or that – about meeting soon for a meal and a talk about science and about life, or asking her advice on various issues, or arranging some new initiative. I have realised that Anne was looking after all of us pretty much all of the time. She made each one of us feel special.

Her energy and engagement with life and people was phenomenal. In addition she had extra-ordinary self-discipline and I had a lot to learn from her here. I never once saw Anne nod off in a seminar. She listened carefully to everything everyone said and her responses were always measured, incisive and invariably ‘spot on’. She never said a bad word about anybody that I can remember. She never complained.

When I joined Anne’s Unit, I was already a molecular biologist of some 15 years. But as such, I was used to working with millions of cells, bacteria or amoeba. We used to call it bucket biochemistry. The huge challenge was to bring molecular biology to the few cells of the embryo and even to the single cell. And we did it. I guess the hallmark of my research with Anne was to make the molecular techniques a million times more sensitive so we could look at specific enzyme activity, specific gene expression, and specific gene mutation or modification in just a few cells, and even a single cell, of the embryo. Once these single-cell molecular technologies were established, we could apply them to different developmental and biological questions and many insights into mammalian development followed during the years I was at the Galton. We began with establishing the cycle of X chromosome activation and inactivation as a model for gene expression and its regulation in early development. From there, we made many new discoveries such as the late origin of the germ line (anti Weissman doctrine). differential methylation of the active and inactive X chromosomes (beginning of mechanisms of epigenetics), imprinting and transgenerational inheritance of acquired characteristics (Lamarkian inheritance) and the discovery of methylation erasure in early development and again in the germ line thus bringing development back to tabula rasa - totipotency. Clinically we applied our single cell molecular biology to pioneering experiments for preimplantation diagnosis of genetic disease. My colleagues and co-workers during these years in Anne's Mammalian Development Unit were Mary Harper, Asangla Ao, Andrew McMahon, Mandy Fosten, Susan Lindsay, Maurizio Zuccotti, Mark Grant, Michael Boubelik.and Cathy Holding. Anne always gave me a completely free rein and encouraged me in whatever I wanted to do. I still miss her.

Posted by The Science Team at 5:03 PM