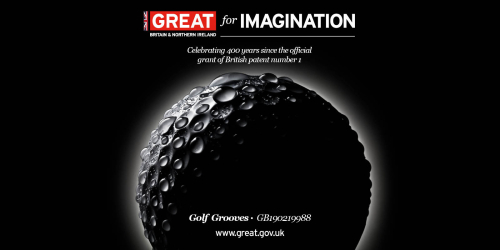 Today's GREATforImagination patent is GB19988 of 1902, the grooved golf club head by Edgar Burr (1866-1908). The grooves allow water and debris to slip away from the ball, so that it can be spun as effectively as a clean and dry one. Adding spin to a golf ball can change its trajectory and cause it to roll in a specific direction once it hits the ground. According to the golfer Edward "Ted" Ray, in his 1922 book "Golf Clubs and How to Use Them", grooved clubs did not become truly popular until the early 1920s, and there was considerable argument in both the UK and USA as to whether they were permitted under the laws of the game. 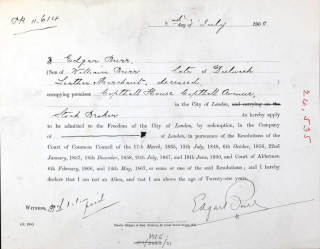 Very little about Burr's life is recorded in golf history books, but our curators have searched census and births, marriages, and deaths records, and digitised newspapers, to discover some details. Burr described himself on the patent as a stockbroker, but he was also an amateur golfer at the Bushey Hall Club, and wrote a column on the game for the Globe newspaper. His father was a leather worker, and he married in 1896. He was granted the Freedom of the CIty of London in 1900. Unfortunately, his invention does not seem to have made him much money, as he was declared bankrupt in 1906. He died suddenly from gastritis in Sandwich, where he had gone to compete in a golf event.

Thanks to Margaret Makepeace of our East India Company Records team and Untold Lives blog, for her work in researching Burr's life.

Posted by The Science Team at 4:30 PM