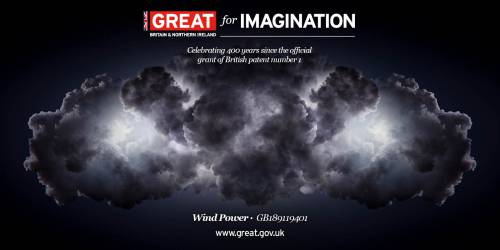 Today's GREATforImagination invention is the first ever wind-powered electrical generator, created by the Scottish engineer and physicist James Blyth (1839-1906). Blyth was the son of an innkeeper, but took advantage of a scholarship to gain a good education and an academic career. In 1887, while a professor at Anderson's College in Glasgow (an ancestor of the modern Strathclyde University), he constructed a windmill attached to a dynamo to light his cottage in his home village of Marykirk. He may have been inspired to use wind to generate electricity by negative comments on the subject by his fellow Glaswegian, the now more famous physicist William Thomson, later Lord Kelvin. He offered to allow his current to be used to light the main street of the village, but superstitious local residents reportedly considered the mysterious electric light to be "the work of the devil"!

Blyth patented his windmill design, which had a vertical axle and cup-like structures to catch the wind, as GB19401 of 1891. Unfortunately, this is not available free online, but you can read it here at the British Library if you have a reader pass. He argued in his patent that this design had aerodynamic effects that would prevent the mechanism from being damaged by overspeed in strong winds, although it was still vulnerable to damage from very powerful gusts.

Blyth subsequently constructed a larger wind generator to provide electricity to the Royal Asylum mental hospital at Montrose, which lasted until 1914. He strongly supported renewable power, although environmental science and pollution were little understood at the time. His main argument was that wind power was cheaper than fossil fuels.

As well as his work on wind power, Blyth was prescient in arguing that gas discharge lamps were more efficient in creating light than filament light bulbs, although the technology of the time was not really up to constructing useful ones. He also contributed to the development of microphones and telephones. The University of Strathclyde continues to be a significant centre in wind energy research.

Posted by The Science Team at 2:51 PM