Staff Visit to the Zoological Society of London (ZSL) Library

On 6 th September a group of staff from the British Library visited  ZSL and found a rich diversity of zoological collections that complements and overlaps with our own.

History of the ZSL: The Zoological Society of London (ZSL) and London zoo was established by Sir Humphry Davy and Sir Stamford Raffles and founded in 1826.

Daily Occurrences:  The Library includes items on the history of ZSL, the most fascinating is a series of volumes called “Daily Occurrences” that record the comings and goings of animals at both London and Whipsnade Zoos, from both of the zoos foundation to the present day. 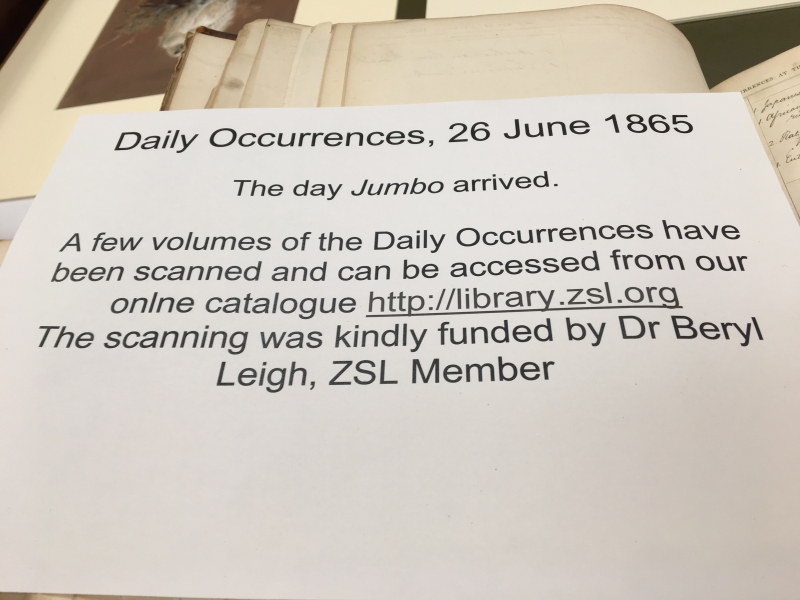 These early daily zoo diary entries in print and more recently e-format, document the life and professional practice of the zoos. Dr Beryl Leigh, a ZSL member and former BL curator has recently sponsored the digitization four of these early print records that could become a valuable data set for future researchers to analyse. ZSL are seeking funding to digitise more to make them available online.

Role of the ZSL: librarians, curators and scientists work together on research projects across the globe to advance our knowledge of wildlife, nature conservation and zoo management.

The ZSL has published it’s zoological research since 1830 in the proceedings of  the Zoological Society of London, along with other key titles and reports:

Building: ZSL Library moved from a central London site to its present location in 1910 and this shell was refurbished in the 1960s and includes the main library and 2 floors of basements with rather precarious rolling shelves.

Collections: focus on zoology and animal conservation, comprises 200,000 items on our shelves, including 40,000 books, 5000 journal titles, the archives of ZSL. The  collections include rare books, illustrated folios, lithographs, paintings and these historical and descriptive type specimen  information remain of great scientific value even today. More about the ZSL archives can be found at:  https://www.zsl.org/about-us/zsl-library-collection/the-zsl-archives

Online Catalogue: many prints, drawings  and paintings are digitised as thumbnail images on the catalogue in order to enhance the records :

https://library.zsl.org/Z10300UK/OPAC/Search/AdvancedSearch.aspx Books, journals and archives can be searched using the online catalogue. It also contains links to digitised resources

Social media: Library maintains a monthly blog and tweets about events and new acquisitions of note and the diverse blogs created by the library staff and curators illustrate the wide range of work carried out by the ZSL. For further details see:

Library services: ZSL Library is one of the major zoological libraries in the world, along with the zoological collections of the Natural History Museum (http://www.nhm.ac.uk/our-science/departments-and-staff/library-and-archives.html  )and British Library (https://www.bl.uk/subjects/science  )

There is a free access (with proof of address and photo ID on your first visit), and free scanning and copy service after researchers agree to sign a copyright form. 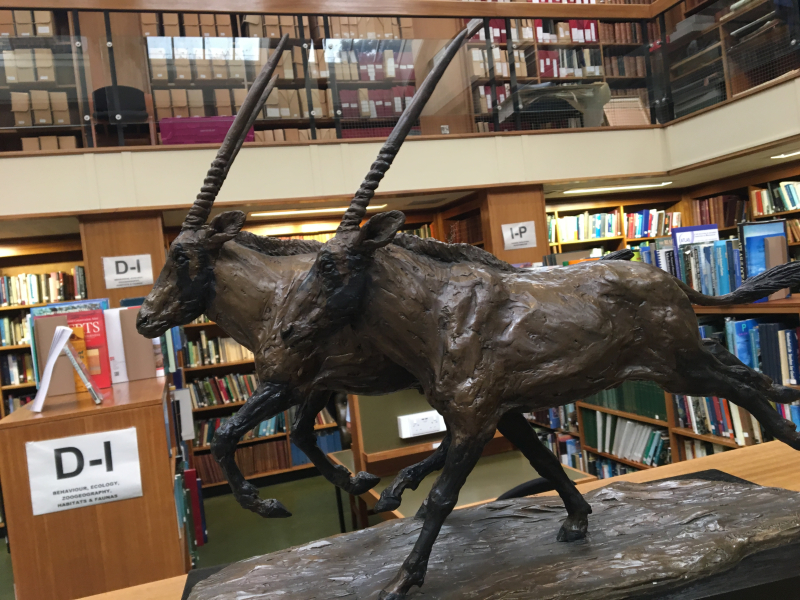 Ann gave an erudite talk on the library and its collections and shared with us representative examples of their historical and contemporary collections. The watershed date for the historicals is prior to 1940 and are reference only while members can loan the modern collection items.

The library is also open for visiting scholars:

the library online catalogue at: http://library.zsl.org/Z10300UK/OPAC/Index.aspx

Some memorable items from the show and tell display included the following: 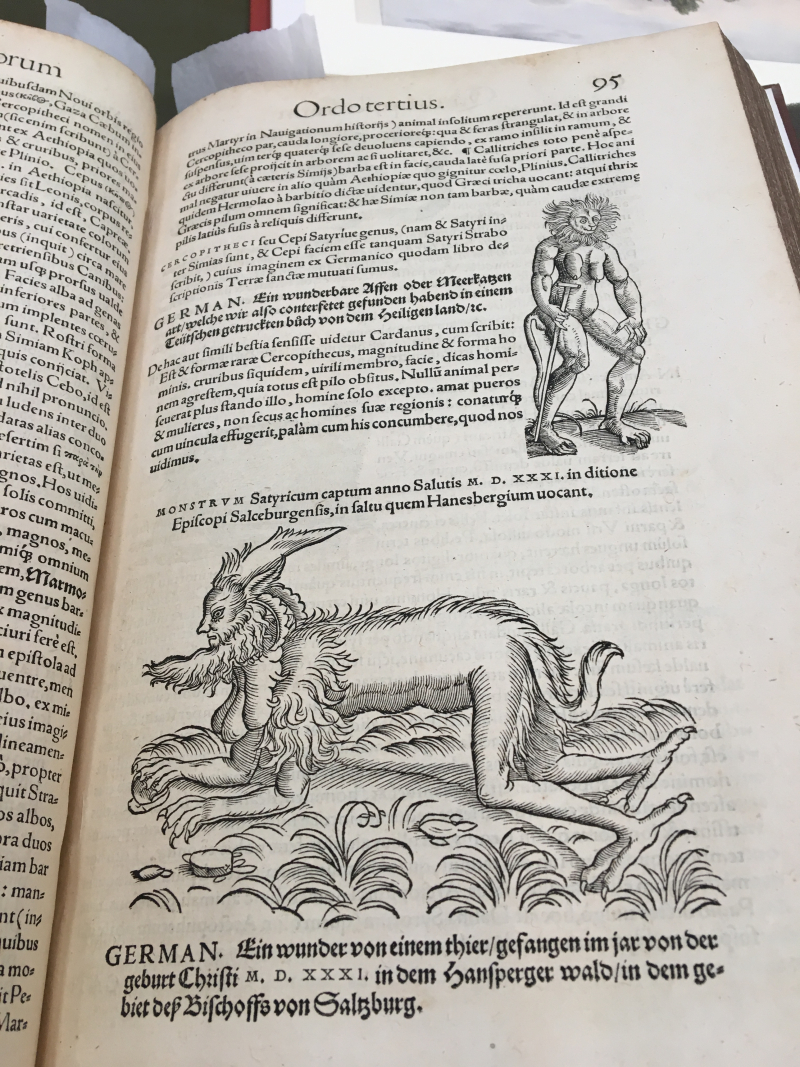 Conrad Gessner: a Swiss naturalist, who attempted to describe all of the animals, actual and mythological at the time, and his 5 book work, Historiae animalium, is one of the oldest in the collection.  These books describe mammals, birds, fish and reptiles, some accurate, but some hybrid, like this ‘giraffe’ below. This is also one of our oldest books in the library includes the unicorn.

The US National Library of Medicine has digitized these texts online under historical anatomies on the web at:

One of the first librarians, a Mr Fish of the ZSL Library organised its collections using an adapted BLISS classification scheme ( http://www.blissclassification.org.uk/ ) These eary items need to be brought out of storage so we felt very privileged to be able to survey these illustrations and leaf through the pages. An appointment is needed to view such rare items. 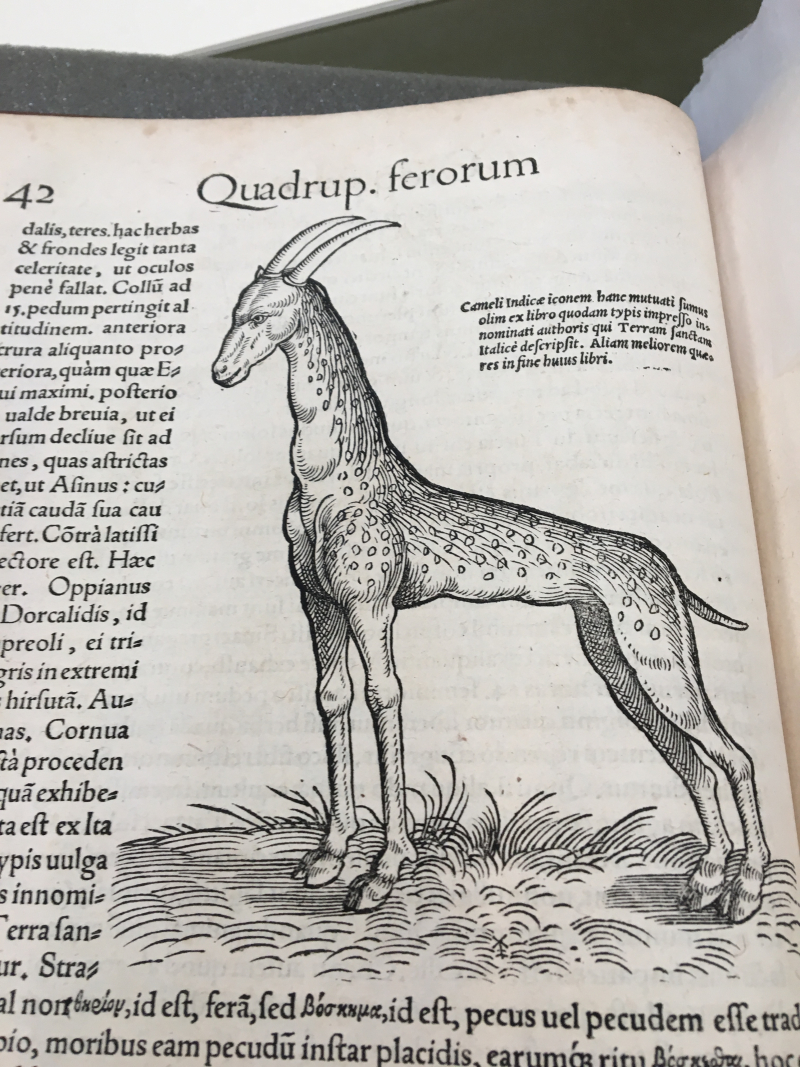 Brian Houghton Hodgson: (1800-1894),spent most of his life investigating and drawing the birds and mammals of Nepal, the Himalayas in general and Northern India. He wrote more than 140 zoological papers, ranging from descriptions of single species to checklists of the fauna and donated most of these to the ZSL. Further details at:

The British Library curated and offers public access to the Hodgson’s papers through the Asian and African Studies reading room , papers can also be found at the Royal Asiatic Society, the Zoological Society of London and the Bodleian Library in Oxford. The Hodgson papers preserved in the African and Asian Studies Reading Room of the British Library were deposited in the India Office Library in 1864 following earlier deposits (between 1838 and 1845) of Buddhist Sanskrit manuscripts and the complete Tibetan Kanjur and Tanjur. 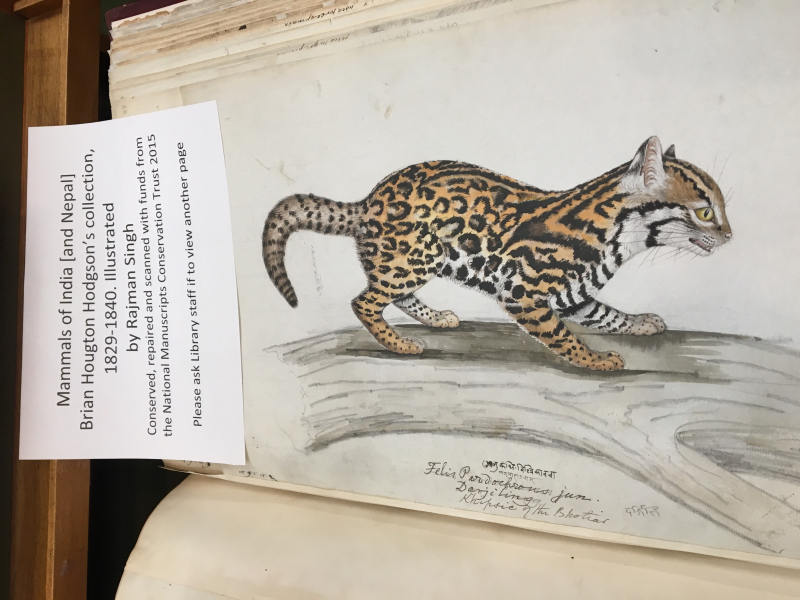 Digitised catalogues of these collections can be traced through the Digital Himalaya project designed in 2000 by Alan Macfarlane and Mark Turin as a strategy for archiving and making available ethnographic materials from the Himalayan region and based at the Department of Social Anthropology at the University of Cambridge.  From July 2014, the project has relocated to the University of British Columbia, Vancouver, Canada, and is engaged in a long term collaboration with Sichuan University, http://www.digitalhimalaya.com/hodgson/ 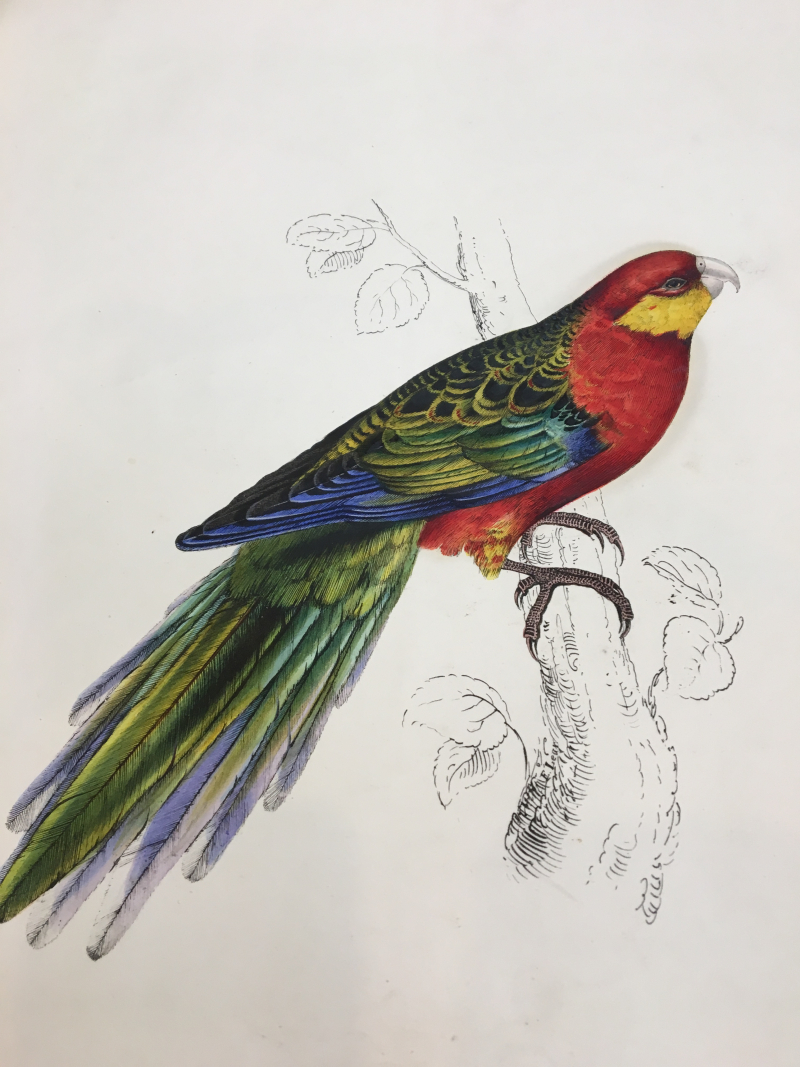 Illustrations of the family of Psittacidae, or parrots, the greater part of them species hitherto unfigured… / by Edward Lear (1812-1888). – London : Lear, 1832. Labelled as Platycercus stanleyi (Stanley parrot)

Edward Lear: is better known for his nonsense poems, including “How Pleasant To Know Mr. Lear” “There Was An Old Man in a Tree” , “The Owl And The Pussy-Cat” , “The Jumblies, ”The Pobble Who Has No Toes etc  yet he was a renowned zoological artist and created numeruos lithographic prints to be found in the ZSL collections. As a talented artist his skills influenced the style of others, such as the ornithologist John Gould and his wife Elizabeth.  One of Lear’s most beautiful works is his volume on the family of parrots, of which the illustrations were based on the birds in ZSL’s parrot house

Further details and illustrations by Edward Lear can be found at: 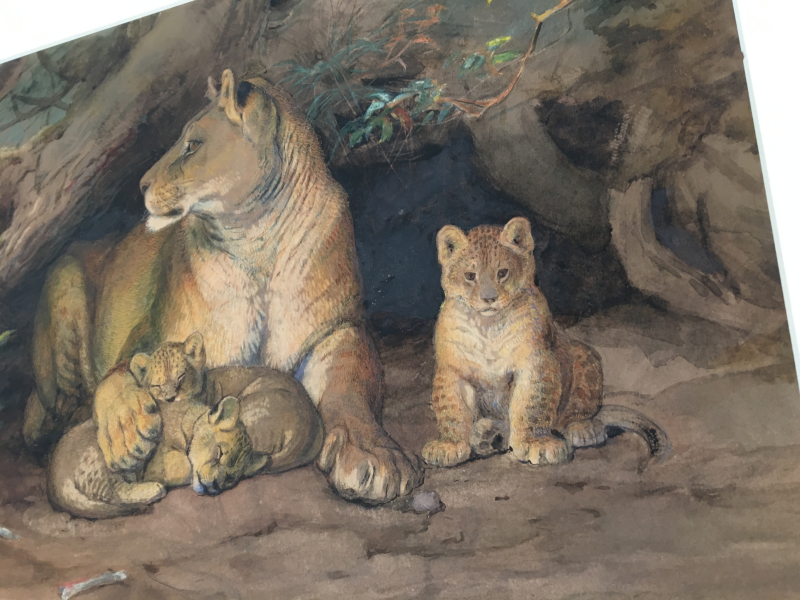 John Gould FRS (1804–1881), the artist, scientist, ornithologist, taxidermist and collector, collaborated with Charles Darwin in identifying the birds from the second voyage of HMS Beagle and from the Galápagos Islands. His work was published between 1838 and 1842 as part 3 of “Zoology of the Voyage of H.M.S. Beagle”, edited by Charles Darwin and held in the library.

Gould was born in Lyme Regis, Dorset, son of a gardener and in 1818 Gould became foreman in the Royal Gardens of Windsor.He visited Australia with his wife in 1838-40 which led to the publication of “The Birds of Australia that included 600 plates in seven volumes, describing 328 species new to western science and named by Gould himself. He also published “A Monograph of the Macropodidae”, Family of Kangaroos (1841–1842) and “The Mammals of Australia (1849–1861) in 3 volumes.

Gould’s links to Austrialia are honoured by the Australian Museum based in Sydney, itself part of the google digital and virtual  tour platform which explores natural history artifacts and specimens  in museums around the world, including the Natural History Museum, London, the American Museum of Natural History and the Museum fur Naturkunde, Berlin. Further details can be found at:

A contemporary book in the show and tell display was the book entitled “Women in science: 50 fearless pioneers who changed the world” by Rachel Ignotofsky, published by Wren & Rook, London available in print and online, which focused our attention on the interesting role of women scientists at the ZSL.

A leading light was Joan Procter, curator of the zoos reptiles from 1923, who died very young at 34.  Dr Joan Beauchamp Procter (1897-1931) was a brilliant student who kept exotic reptiles as pets, including a crocodile and later contributed to the design of ZSL London Zoo’s aquarium and Reptile House and discovered and described a new species, namely the Peninsula Dragon Lizard. She adopted and tamed one Komodo dragon as a pet and would walk around the zoo with it greeting visitors.

These examples show case the wealth of knowledge and biographical stories hidden in the archives and collections of the ZSL which I would encourage researchers and students of the biosciences to explore further.

Photographs and text by Paul Allchin,

Posted by The Science Team at 4:16 PM