Alphonse Normandy was born in Rouen in 1809 as Alphonse le Mire. He became a medical doctor but was more interested in chemistry, studying at Heidelberg University with the well-known chemist Leopold Gmelin (now famous for the database of inorganic compounds named after him, which grew out of an 1817 textbook he wrote). He moved to London in 1838. From the 1840s he changed his name to "Normandy" after the region where he was born. He lived for some time in Judd Street near the British Library, where he has a blue plaque at number 91. He died in 1864.

He is mostly remembered for his invention of desalination devices, distilling seawater to produce fresh water. He patented his still design as GB13714/1851 with one Richard Fell. The patent is not online but you can see it if you come to the British Library with a reader pass. It uses two-effect distillation where the heat released in the condensation of the initial steam boils a second load of water, using energy more efficiently and effectively doubling the output. The device also captures formerly dissolved air released during the heating of the water and reintroduces it to the steam, creating aerated distillate and reducing the "boiled" taste. In 1863 an Amendment to the Passengers Act of 1855 declared that passenger ships were allowed to reduce the amount of fresh water they carried if they had a desalinator of the Normandy or the rival Winchester-Graveley design. 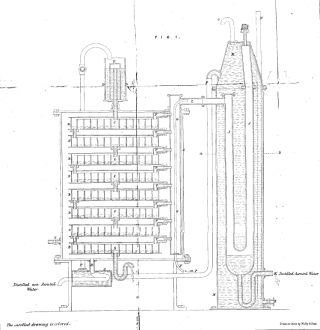 Normandy's Patent Marine Aerated Fresh Water Co. was incorporated in 1858. After a few years it moved to a large building near Victoria Docks, which finally closed in 1910. During the later years of his life Normandy clashed with the directors and shareholders of the company due to his only assigning the GB patent to the company but retaining the US patent himself, forcing the company to use him personally as a sales agent for distribution overseas. His sons, however continued with the company. Alphonse's son Frank Normandy wrote what was probably the first book on desalination - A Practical Manual on Sea Water Distillation, which is held in our collections at 08767.aa.5, or 628.16 3395.

A surviving Normandy distiller has been found at Fort Zachary Taylor, Key West.

Normandy held many other patents, of which the most notable was hardening soap with sodium sulphate (GB9081/1841). He kept a private laboratory and taught chemistry. He was elected a fellow of the Chemical Society (now the Royal Society of Chemistry) and council member, and was a member of the Royal Institution.

In 1855 he was one of several chemists, doctors and activists to testify to the Select Committee of the House of Commons on food adulteration, a series of hearings that scandalised the British public and led to the first laws against it, although the fight would not truly succeed until much later in the century. Normandy reported that practically all the bread sold in London had been adulterated with alum to make it whiter and to absorb water and bulk it out. He described adulteration of various other foods, in particular the adulteration of coffee with chicory and beer with the neurotoxic tropical plant cocculus indicus. He also briefly described the grossly unhygienic conditions of many London dairies. Ironically, his hardened soap had been banned from sale for some years because the Excise considered the process to be adulteration, which was brought up during the Committee discussion. 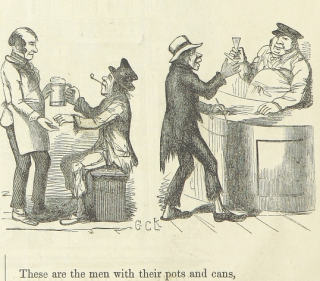 Image from "The House that Jack Built" by George Cruikshank, 1853

In 1850 he wrote A Commercial Hand Book of Chemical Analysis (shelved here at 1143.h.26), a very interesting book covering most chemicals that were used or sold industrially at the time, and various procedures to check for food adulteration. The book notably described early quantitative colorimetric assays of dyes and spices, and microscopic examination of flour to determine adulteration with other products.

Posted by The Science Team at 4:36 PM