Did Man Get Here by Evolution or by Creation?

In 1967, Jehovah's Witnesses publish a little blue volume asking Did Man Get Here by Evolution or by Creation? Half a century later, a copy shows up in the British Library, in a box of books left as part of the John Maynard Smith Archive.

John Maynard Smith (1920-2004) was a British evolutionary biologist and no supporter of Jehovah's Witnesses in any form. Rather, he had been an atheist ever since discovering the writings of population geneticist J.B.S. Haldane at the age of 15 – and a 'semi-conscious atheist before that'. Going into Eton's school library, he found Haldane's essay collection Possible Worlds and its 'mixture of extreme rational science, blasphemy and imagination, was a way of thinking that I had never encountered before'. It inspired Maynard Smith to read up on evolution and eventually – after a detour into aircraft engineering – to study it with Haldane and turn it into a successful career. So how did he come to own such a curious little book?

We have to go back to 1967 again. In October of that year, a Mrs Daphne Taylor of Sheffield packs up the book and posts it to Sussex University. 'Dear Professor,' she writes, 'Please find enclosed a small gift which I hope you will accept and enjoy reading.' Why send it to Maynard Smith? Has she sent it to any other evolutionary biologists? We don't know, but her motivation becomes quite clear as she goes on to say that she knows several people 'including teachers interested in evolution' who 'have found it most enlightening.' She wonders if Maynard Smith would let her know his views 'on any of the points brought out in the book'? There is, unfortunately, no record of any reply.

But is it telling that he kept both the book and, folded inside it, the accompanying letter? We do know that Maynard Smith had a continued interest in religion and creation(ism). The archives contain a short manuscript from his later years on "The Evolution of Religion" (co-authored with David Harper); in the 1960s he discussed science and religion on the radio and in 1986, following an invitation by the Oxford Union, debated the motion "That the Doctrine of Creation is more valid than the Theory of Evolution" (198 noes, 115 [or 150; the recording is unclear] ayes). 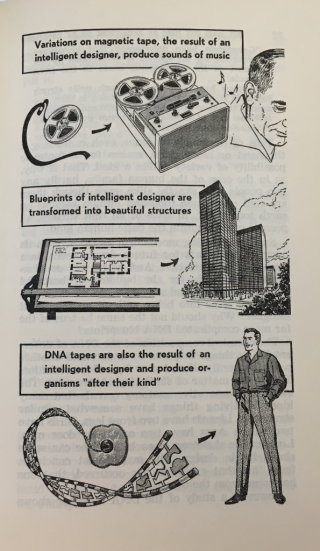 Proof for an intelligent designer? From "Did Man Get Here By Evolution Or By Creation?", p.71. Copyright © Watch Tower Bible & Tract Society of Pennsylvania.

What do the Jehovah's Witnesses ask and affirm in their volume? Evolutionary teaching saturates everything, even religion. But 'what do you personally know of the evidence for or against the belief in evolution? Does it really harmonize with the facts of science? We invite your careful examination of this matter, as it has a direct bearing on your life and your future.' The running argument is one that had been first used by William Paley in his 1802 book Natural Theology: or, Evidences of the Existence and Attributes of the Deity – nature is too complex for there not to have been an intelligent designer or creator. Paley famously used the analogy of a watchmaker: suppose you were to find a watch on the heath, and upon examining it and its complexity, would you not suppose there has to have been a watchmaker? Similarly, the Jehovah's Witnesses argue that 'what is made requires a maker'. Liking DNA to 'complex blueprints for future development', they wonder: 'And when we see blueprints responsible for the building of beautiful bridges, buildings and machines, do we ever contend they came into being without an intelligent designer?' What is more, there is not enough evidence for evolution (while all the existing evidence is compatible with the Bible), it's all just a theory based on conjecture and wishful thinking, unsupported by fact, and, really, not proper science at all.

The conclusion? The truly 'honest seekers after truth must acknowledge that the evidence is overwhelming that man got here, not as a result of evolution, but by means of creation by God.'

The question of evolution or creation is of course not new – Paley's watchmaker analogy may be familiar, but more will have heard (of) the story of the 1860 debate between Thomas Huxley ("Darwin's bulldog") and Bishop Samuel Wilberforce: are you descended from monkeys on your grandmother's or your grandfather's side? (The story itself has been highly sensationalised: contemporary accounts suggest that it was much less dramatic.) But organised creationism, in the sense in which it is most commonly understood today, is very much shaped by American Evangelical Christians and emerged in the 20th century. Stephen Jay Gould referred to it as a 'local, indigenous, American bizarrity' – but it has in fact not been confined to America. In Britain, especially recently, creationism has been discussed mostly in the context of education (free schools). Maynard Smith, while obviously not involved in those recent debates, discussed whether there is a conflict between science and religion in a serious of radio broadcasts aimed at school audiences in 1964. He concluded that there are cases and ways in which they do contradict each other but agreed with Christians in so far as to say that there seems to be something remarkable – but not necessarily unique! – about human intelligence in comparison to animals. He debated creationists, once together with Richard Dawkins – famously or infamously, one of the most outspoken critics of creationism and religion. Dawkins remembers that in the 1986 debate, Maynard Smith 'was, of course, easily able to destroy the creationist's case, and in his good-natured way he soon had the audience roaring with appreciative laughter at its expense.' Interviewed by the British Humanist Association – who are actively lobbying against creationist influences – in 2001, Maynard Smith finally summarised his views on religion as follows:

'I think there are two views you can have about religion. You can be tolerant of it and say, I don't believe in this but I don’t mind if other people do, or you can say, I not only don't believe in it but I think it is dangerous and damaging for other people to believe in it and they should be persuaded that they are mistaken. I fluctuate between the two. I am tolerant because religious institutions facilitate some very important work that would not get done otherwise, but then I look around and see what an incredible amount of damage religion is doing.'

So how did man get here? Obviously, Maynard Smith's answer would have been very resounding, "by evolution"! 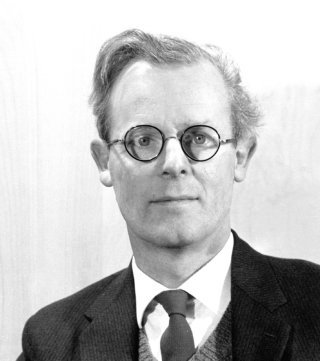 Posted by Helen Piel. Helen Piel is a PhD student at the University of Leeds and the British Library. She is part of the AHRC's Collaborative Doctoral Partnership scheme and working on the John Maynard Smith Archive, exploring the working life of a British evolutionary biologist in the post-war period.

This post forms part of a series on our Science and Untold Lives blogs highlighting some of the British Library’s science collections as part of British Science Week 2018.

Krasnodebski, M. (2014). Constructing creationists: French and British narratives and policies in the wake of the resurgence of anti-evolution movements. Studies in History and Philosophy of Biological and Biomedical Sciences 47, 35-44.

Posted by The Science Team at 1:50 PM