The sixtieth birthday of obstetric ultrasound 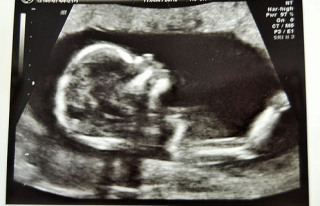 Today is the sixtieth anniversary of the publication in The Lancet of the first scholarly article on medical ultrasound by the obstetricians Ian Donald and John MacVicar, and the engineer Tom Brown. While earlier groups had experimented with ultrasound, it was Donald and Brown who achieved real diagnostic success with it, and popularised it in the medical profession. They initially applied it to distinguish uterine cysts from solid tumours such as fibroids, and later developed it for other important tasks, such as diagnosing placenta praevia (a potentially lethal condition during pregnancy in which the placenta attaches too low down in the womb) and directly observing foetuses. It is thanks to their work that ultrasound has become routine in pregnancy and many peoples' first view of their children.

Donald had become interested in the potential of ultrasound for medicine thanks to his experience with both radar and sonar while serving in the RAF during World War II. Much of his success was because he happened to work for the University of Glasgow, in a city with a large-scale shipbuilding industry which used ultrasonic techniques to test for flaws in metal parts. It was also the home of Kelvin and Hughes, one of the main manufacturers of ultrasonic testing equipment, for which company Brown worked.

There was also a particular perceived need at the time for a safer method of examining foetuses in the womb, as epidemiological studies had discovered that X-ray examinations during pregnancy led to a higher risk of leukaemia and other cancers in the early lives of the children.

Donald subsequently became a celebrity not just for his scientific and medical skills, but as a prominent medical campaigner against abortion. He frequently stated that his observations of foetuses in the womb had confirmed him in his belief that they qualified as human beings from conception, although unlike some religious pro-life campaigners he morally accepted abortion when the foetus was clearly unlikely to survive childbirth or where the child would be very severely disabled. Brown's career effectively ended with the failure of an attempt to start a business producing medical ultrasound equipment, and he felt later in life that much of the media neglected his vital technological contributions to the development of the idea, although Donald always acknowledged them in public.