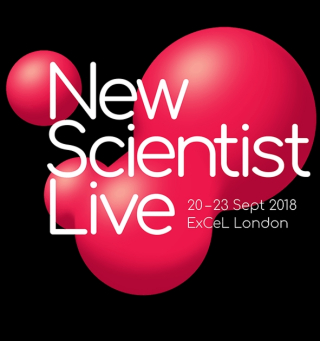 I visited New Scientist Live at Excel on Friday, which is an annual event aimed at popularising science, promoted by the weekly popular science magazine. There were a wide range of exhibitors, a mixture of learned societies, universities, technology companies, commercial and charitable organisations offering science "experiences", and makers of scientific ornaments and clothing.

There were also forty-minute talk slots throughout the day by different speakers on current science. The celebrity names were on a VIP stage offered only to those who bought more expensive tickets, but the other talks I attended were all very interesting.

Lee Cronin from Glasgow University described his work on creating a chemical computer, using the two states of a reversible Belousov-Zhabotinsky reaction as the equivalents of the binary 0 and 1. At the moment, the system is at proof of concept stage, but it holds the potential to produce computers more powerful than anything achievable using traditional solid-state electronics.

Paul Bernal gave a somewhat depressing but convincing talk on the difficulties of preventing online "fake news" and bullying. "Fake news" arguably dates back to the early modern era or even earlier, with the circulation of slanderous woodcut broadsheets and songs about peoples' political enemies, while online bullying essentially transfers eternal human social dynamics onto social media, with the novelty lying in the speed and scale with which such behaviour can occur. Bernal pointed out that "fake news" on Facebook and bullying on Twitter are negative versions of precisely what the platforms have been designed to do in terms of, respectively, acting as a powerful advertising medium and providing a means of large scale conversation which anyone can join. Bernal told the cautionary and morally ambiguous story of Brenda Leyland, a woman who bombarded the parents of the missing child Madeleine McCann with online allegations that they had killed their daughter... and was then driven to suicide by the hounding she received from the traditional news media.

James Wong discussed the argument (commonly made by organic-farming campaigners) that nutrient levels in plant foods have been declining due to industrialised food production. His arguments were that this has been observed, and is probably due to faster-growing varieties failing to absorb minerals as efficiently, but that the effect is probably not significant compared to other causes of variation in crop nutrient content such as weather and storage conditions, and is outweighed by the sheer increase in food quantity and variety that modern agriculture and international trade have achieved.

Patricia Vargas's talk was billed somewhat misleadingly as a discussion of whether AIs deserve human rights, but instead dealt more with characteristics that robots might be designed with, that would make humans more likely to accept them in their daily lives and form emotional attachments to them. She mentioned in particular robot pets, such as PLEO, based on a baby dinosaur, and Paro, based on a baby seal.

Fianlly, Mark Miodownik gave an entertaining talk, with demonstrations, on the nature and history of kerosene as a fuel.

Posted by The Science Team at 5:32 PM